If talks fail, Hamas says it will not return to war

There is little hope a breakthrough will be achieved in the upcoming talks in Cairo between Hamas and Israel, but Hamas officials say they are unlikely to resume armed conflict at this stage. 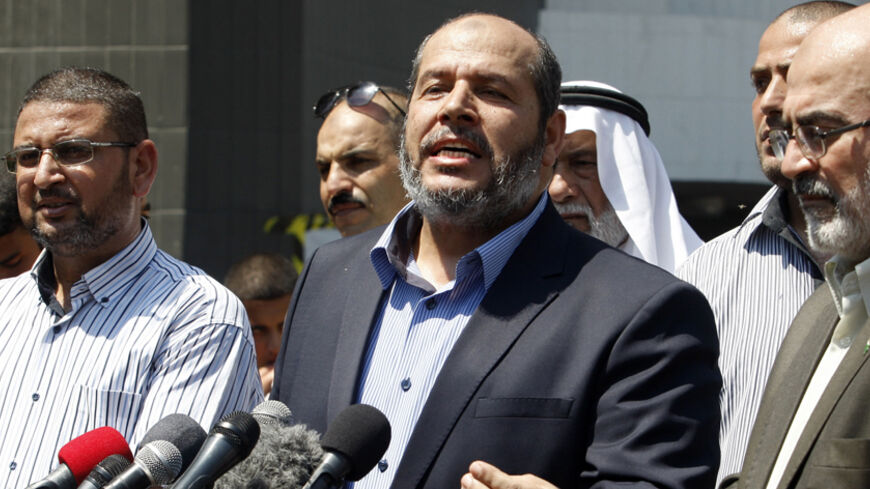 The indirect Palestinian-Israeli negotiations are expected to resume in Cairo on Sept. 23 to discuss a permanent cease-fire, with little hope of a breakthrough.

In an interview with Al-Monitor, an Egyptian official, who is close to the upcoming negotiations, said that talks will be tough between the two sides. The source explained that the two parties stand on opposite sides, far apart. The Israeli delegation is expected to demand the disarmament of the Gaza Strip, while Hamas will demand the construction of a seaport, the operation of the airport and the release of Palestinian prisoners in exchange for delivery of the bodies of Israeli soldiers.

This means that this upcoming round will not be the last, in light of the difficulty in settling these major issues. The next round has yet to be scheduled.

“The option of military operations in case of failure of the upcoming negotiations between the two sides is not on the table at all since the cease-fire agreement clearly specifies the cessation of all land, sea and air hostilities between Gaza and Israel. [It also] provides for refraining from any ground invasion operations of Gaza and the targeting of civilians and for halting the firing of rockets and various types of attacks on the border,” the source said.

Regarding the possibility of renewed military confrontation in Gaza with the start of Palestinian-Israeli negotiations in Cairo, the source indicated that the situation in Gaza has remained unchanged after the end of the war and will only worsen.

A senior official in Hamas told Al-Monitor, “Gaza is racing against time in terms of agreeing on the mechanisms for reconstruction as winter is approaching and the shelters, which house tens of thousands of citizens whose homes were ruined, do not protect Palestinians from the cold winter weather. This is why Hamas is counting heavily on the settlement of issues related to the opening of crossings and the lifting of the siege. However, the failure to settle these issues at once and as fast as we want does not necessarily mean going back to the option of armed confrontation with Israel — the cost of such option is exorbitantly high.”

On the other hand, Mousa Abu Marzouk, deputy head of Hamas' political bureau, on Sept. 19 pointed out that Hamas does not want another war with Israel, but suggested that more fighting is inevitable if no agreement is reached to open the crossings. “The failure of negotiations in Cairo and not lifting the blockade could lead to another war, even though we do not want this. I think that the Israelis do not want to see this war happen again,” said Abu Marzouk.

In a separate incident, on Sept. 16, Hamas’ security apparatus in Gaza arrested two Salafist jihadists in connection with the firing of rockets from Gaza into southern Israel. The pair had acted individually and launched the rockets without any order being issued by their leadership. Hamas informed Salafist leaders in Gaza that it had arrested the two members, and that they will crack down on those launching rockets and not allow anyone to violate the Palestinian consensus to end the war or observe the cease-fire.

It is worth mentioning that directly after the end of the war on Aug. 28, Hamas redeployed a 600-strong special security force that operates 24 hours on Gaza’s borders to prevent cross-border rocket fire into Israel.

A Hamas security official told Al-Monitor, “Gaza’s border will not be violated by any group firing rockets at Israel in light of a national consensus for a cease-fire. The security services in Gaza are tasked with preserving the security of the people here, preventing Israel from having any excuse to renounce the upcoming negotiations or escalate the situation on the ground and allowing the political leadership to implement the cease-fire agreement. This is our decision and we will not allow tampering with Gaza’s internal security under any circumstance whatsoever.”

Hamas’ unwillingness to renew armed confrontation with Israel coincided with concrete steps by the movement in Gaza to repair the damage caused by the recent war. Hamas facilitated the work of some local and international institutions to collect statistical data on the damage and distribute funds for those who were affected. The movement also secured apartments for those whose homes were entirely destroyed and started to renovate partially damaged houses. In this respect, a finance official in Hamas confirmed to Al-Monitor that so far this totaled $32 million.

In a meeting of academics on Sept. 15 in Gaza, attended by Al-Monitor, Abu Marzouk stated that the Palestinian Authority (PA) could begin the process of reconstruction of the Gaza Strip as of today, through funds it had received to the value of $100 million, without the need to wait for the donor conference next month.

This prompted an official with the national consensus government to deny the receipt of funds enabling the government to start the reconstruction of Gaza, since only emergency relief had been received to meet the urgent needs of the population, such as to provide housing, food and medicine, especially for near 100,000 displaced people in the Gaza Strip.

Hamas officials abroad told Al-Monitor that in recent weeks the movement organized a number of gatherings in numerous Arab and Islamic capitals to celebrate the victory of Gaza — including in Ankara, Algiers, Doha, Beirut, Amman and Kuala Lumpur — and that during these events donations were made by businessmen, charitable organizations, companies and citizens for the relief to those affected by the war in Gaza. The officials did not state the exact amount, but referred to millions of dollars allocated to the intended recipients in Gaza.

Fatah’s official spokesman, Ahmad Assaf, said that, in recent weeks, the Hamas leadership in Gaza had received $700 million to help Gaza residents, but that these funds have not reached their intended destination yet.