Key terms in the cease-fire agreement with Israel have not been implemented, raising Palestinians' frustrations. 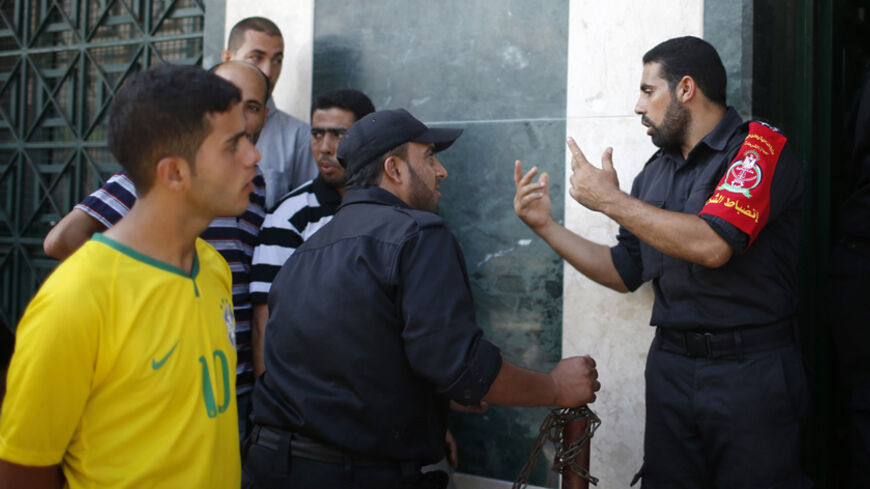 Two weeks after the end of the Gaza war, the demands made by Hamas have not been realized, in particular lifting the blockade on Gaza and opening the border crossings, which is causing delays in starting postwar reconstruction.

The current situation has led to speculation in some quarters of Gaza that war might resume because of Israel failing to honor the cease-fire agreement amid growing Palestinian frustration that the conflict did not achieve its objectives.

Ismail al-Ashqar, head of the Palestinian Legislative Council's Interior and Security Committee, said on Sept. 10 that if Israel does not abide by the truce agreement, the resistance would not lay down its arms, would be prepared to escalate and resume fighting for months (and in high spirits) and would inflict heavy losses on the Israelis.

But a senior Hamas official told Al-Monitor, “The movement does not intend to resume fighting if there is a delay in implementing the agreement.” He added, “Any leaks about renewed fighting are an attempt to confuse things. Hamas is in contact with the Egyptians to compel Israel to abide by what it promised. There are contacts at the regional and international levels to prevent the return of the situation to what it was before the signing of the cease-fire agreement.”

Mahmoud al-Zahar, a member of Hamas' political leadership, said on Sept. 5 during Friday prayers in Gaza that Israel cannot repudiate the cease-fire, which was sponsored by several states. He added that claims that Israel will not abide by the agreement are being propagated by some who are associated with the occupation.

Al-Monitor asked a senior official in the reconciliation government why it is taking so long to implement the cease-fire agreement, to which he replied, “The government has launched a plan to rebuild Gaza in three years. [It] consists of three phases: continuing relief aid, meeting citizens’ most pressing needs, such as paying the rent for those who lost their homes, and rebuilding partially damaged homes by providing the money necessary to their owners. But there are several hurdles, including the reluctance of donors to provide money, continued Israeli restrictions on the crossings and the lack of a solution to Palestinian internal differences.”

During a political seminar held Sept. 10 in Gaza and attended by Al-Monitor, Mousa Abu Marzouk, vice president of Hamas' political bureau, said he expected the indirect Palestinian-Israeli negotiations on the post-cease-fire period in Gaza to resume the following week under Egypt's auspices. He referred to Palestinians as being at a “critical stage,” as Gaza needs the crossings opened and a concerted reconstruction effort.

A financial official in Hamas told Al-Monitor, “The movement has distributed $32 million to the affected people in the days that followed the war’s end. The money was distributed as follows: $19.63 million to homeowners whose homes were totally destroyed (each owner of a housing unit received $2,000); $11.46 million to the owners of partially destroyed houses ($1,500 for each residential unit owner); and $800,000 to the martyrs’ families ($1,000 to the family of every martyr who was married).” He said the distributions were “emergency relief and not part of the compensation payable to the affected people.”

Meanwhile, another financial problem affecting recovery in Gaza, the government salaries crisis, had remained without resolution despite statements from Hamas and Fatah circles that a solution was near. At a Sept. 9 news conference in Ramallah, Deputy Prime Minister Mohammad Mustafa said the government was working to pay the salaries of the public sector employees who were appointed by Hamas by securing funds from outside the Palestinian Authority (PA) budget but within safe mechanisms and without legal problems. Hamas was displeased with Mustafa’s statement, calling it proof that the government is perpetuating the division between Gaza and the West Bank.

What's new in regard to this matter is that on Sept. 11 Hamas began issuing back pay to employees. On Sept. 10, Yusuf al-Kayali, undersecretary of the Ministry of Finance in Gaza, had announced that half of each Gaza employee’s salary would be paid through the post offices and banks Sept. 11. He said that the payments would range between 1,000 shekels ($300) and 4,500 shekels ($1,300). He did not indicate the source of the money.

When Al-Monitor spoke with a senior official in the Ministry of Finance in Ramallah about the payment plan, he responded, “The ministry is unaware about paying the 40,000 Gaza employees through post offices. Their issue has not been resolved yet. Paying half their salaries was a decision by the undersecretary of the former Ministry of Finance in the Hamas government. The Ministry of Finance [in Ramallah] has no knowledge of this.” He also said, “This decision would have adverse effects on deepening the Palestinian crisis between Fatah and Hamas if the ministry’s undersecretary in Gaza doesn’t refer back to the minister who is in charge of him in Ramallah.”

Of particular note regarding the internal friction between Hamas and Fatah and its negative impact on implementing the cease-fire agreement is Hamas’ clear desire to improve relations with Egypt and turn the page on the tensions between them.

Ismail Haniyeh, Hamas’ leader in Gaza, contacted the Egyptian intelligence service on Sept. 7 in an effort to compel Israel to implement the cease-fire agreement and to stress the importance of starting reconstruction in Gaza. Haniyeh praised Egypt’s role and its importance to the Palestinian cause.

A senior Hamas official told Al-Monitor, “Hamas took an internal decision to develop its relationship with Egypt, because the movement respects the internal choices of the Egyptian people and [does not wish] to interfere in Egypt’s internal affairs. That is in light of Cairo’s role in reaching the cease-fire agreement with Israel, and in light of [Cairo] being a guarantor of this agreement and no one else. In fact, [Cairo] is needed to resolve any future problem with Fatah and the PA, in addition to infiltrating the regional blockade imposed on Gaza. … This will only happen through the Egyptian gate.”