President Abdel Fattah al-Sisi's decision to redraw provincial boundaries is worrying Arab tribes in remote and impoverished areas, where they fear diminishing revenue and development from the central government. 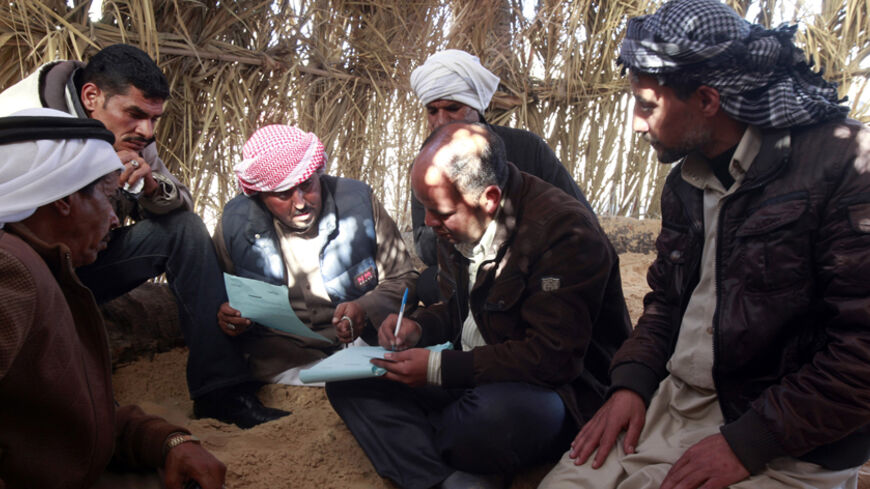 The new demarcation of Egyptian provincial borders, announced by Abdel Fattah al-Sisi in May, is starting to be implemented. Maj. Gen. Adel Labib, minister of state for local development, announced the establishment of three new provinces: Central Sinai, El Alamein and Oases. Labib also announced that the government intended to redraw the provincial boundaries and that it has already completed some, but details were yet to be announced.

According to Sisi’s program, the number of provinces will increase from 27 to 33. The demarcation of new provinces faces objections, especially from residents of border and remote regions inhabited by Arab tribes in the provinces of Sinai, the Red Sea (eastward), Nubia (south) and Marsa Matrouh (westward).

Marwan Rabah, vice president of the Federation of the Sinai tribes, told Al-Monitor that the demarcation of new provinces was of no benefit, and that it would lead to damage in the cities al-Hasana and Nakhl (poorest in the Sinai) by separating them from north Sinai and converting them into provinces with independent funds (under central Sinai).

“The financial allocations of each province depend on its own resources, and Hasana and Nakhl are the poorest in terms of resources, which will lead to a lack of funds in central Sinai, and an increase in people's poverty,” Rabah said.

Concerning the damage to north Sinai and south Sinai, inflicted by the new demarcation of Mount Sinai as a province, Rabah said, “The people of the north and the center are affected because a large part of them used to work in south Sinai due to the tourist activity there. However, this has deteriorated since June 30 and roads between north Sinai and south Sinai are now linked by gates supervised by security forces. Road security has been beefed up and is expected to further increase with the new division. The people of north Sinai will thus have to go through the checkpoints at the gates of central Sinai, and then when passing from the middle to the south. As for the people of the south, they are the least affected because they originally do not suffer from the poverty experienced by the northern cities and villages.”

Mustafa Singer, a journalist from Sinai, told Al-Monitor that the crisis between the state and the Sinai tribes has historical roots related to the state’s denial of the tribes’ right to own territory in Sinai and the former’s belief that the latter have seized those lands. Tribes, however, believe that they have historical rights to own land.

A source at the Ministry for Local Development told Al-Monitor under condition of anonymity that there are some tribes in Sinai showing intransigence to any decision taken by the state because of such disagreements.

Sabri Al-Jundi, media adviser to the minister of state for local development, told Al-Monitor that a community dialogue concerning the new demarcation project is ongoing between the state and all the tribes in Sinai and that there is no intransigence on the part of both parties. He added that many of the Sinai residents were appeased after the minister spoke to them, despite the fact that Rabah denied any contacts between the Sinai tribes and the state.

Mohammed Taher Sedo, sheikh of the Halayeb and Shalatin tribes in the Red Sea, told Al-Monitor that the tribes of the Red Sea generally rely on aid given by the government, which considers them to be living in a remote province, lacking all sorts of development resources. The government provides all kinds of educational and medical services for free in addition to electricity, water and sewage services. Over 500 families benefit from this aid.

“Due to the new segmentation in which a large part of the Red Sea province will be annexed to al-Said provinces, some feared that the tribes of Halayeb and Shalatin would not be able to benefit from the free services and we would be treated such as the residents of Aswan,” he said. “However, no one is opposing the new segmentation since we spoke to the minister of local development who told us that the services and aid will not be affected.”

Fawzi Jaber, an activist from Nubia, told Al-Monitor that the residents there were rejecting Egypt’s new administrative segmentation, which included dividing Nubia between three provinces (Aswan, Toshka and the New Valley). This would disperse the residents of Nubia without taking into account their mutual culture and identity, in addition to forcing them to blend in with different cultures and traditions, which (according to Jaber), was unacceptable and non-negotiable.

It has been decided that Marsa Matruh would be divided into three provinces (Siwa, Marsa Matruh and El Alamein). Al-Monitor contacted Abu Bakr Fardi, spokesman of the Forum of the Sons of Ali Tribes, the largest tribes in Matruh, who conducted a poll on the Forum’s Facebook page concerning the province’s new segmentation. The residents of Matruh who visited the page gave different opinions. One activist said, “The segmentation is for the province’s interest, it supports the centralization and increases the services and budget,” while another said, “It has no advantages for the residents of Matruh.”

Al-Jundi told Al-Monitor that the reports published concerning the new divisions were only the product of initial discussions and that the final demarcation has not yet been decided upon. He also said the partition would not affect the Egyptians’ financial privileges and services.

One could say that the reason behind this reluctance is the fear that financial aid and services will be reduced and that tribal unity will be destabilized, in addition to the tense situation between the government and certain tribes, such as a few in Sinai and in Nubia.

Another crisis is represented by the incapability of the tribes and the residents of the provinces to agree on a common stance concerning the partition, and thus the government has to negotiate with several groups for each province.

For example, despite that Sedo said the crisis in the Red Sea was solved, certain popular delegations met with the minister of state for local development a few days ago and rejected the new demarcation. Some residents also expressed their opposition by organizing protests.

In this context, Jundi said that the government is opening the door to negotiations with all parties. However, it will not negotiate with any party that lacks legal support or any entity whose interests contradict with the ones of Egypt’s national security.