The Egyptian state is refusing to certify the legal ownership of some land in Sinai despite citizens meeting the necessary requirements. 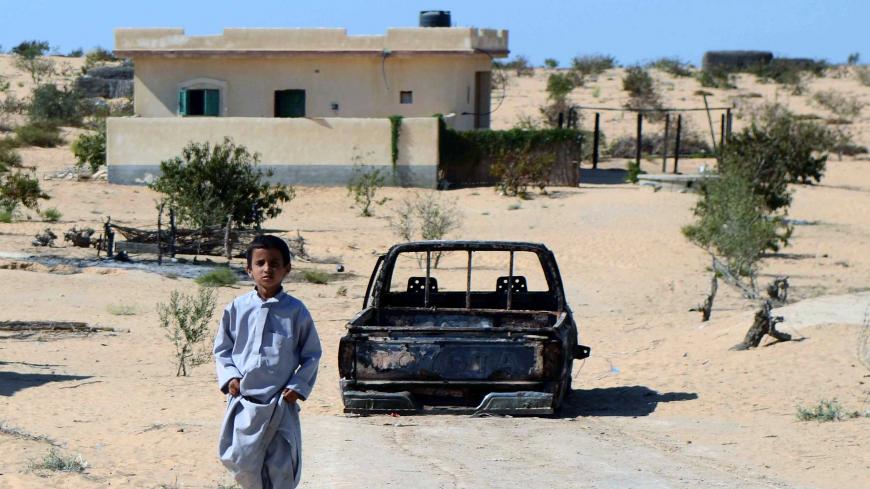 An Egyptian child walks in front of the wreckage of a car in a village on the outskirt of Sheikh Zuweid, North Sinai, Egypt, Sept. 10, 2013. - MOHAMED EL-SHAHED/AFP/Getty Images

CAIRO — The residents and companies of Egypt's North Sinai governorate are running into difficulty as they seek to legalize their ownership of land acquired through the practice of "wad al-yad," or the possession of land without official documentation of ownership. The Egyptian government is certifying some residents' requests for documentation of ownership while denying others'. This selective legalization indicates government corruption, according to some experts, while other experts say that the state's discrimination is perfectly legal.

While illegal in Egypt, the practice of wad al-yad is still widespread in North Sinai, with more than 40,000 pieces of land inherited through the practice, according to a source in the General Directorate of the North Sinai governorate.

Requests for legal recognition of ownership must be submitted ​to the General Directorate of the North Sinai governorate by Jan. 8, 2019. All landowners failing to meet this deadline will be considered in violation of the law and illegally occupying state land. The state is then free to remove them from the land. This government policy will impact the 420,000 people living and working in North Sinai.

The wad al-yad system doesn't mean people stole or seized the land. The plots of land in question were either acquired by sale or passed on from generation to generation via inheritance, with no official title, deeds or other legal documents proving ownership. Most lands in Sinai and the border regions, such as Halayeb and Shalateen, Nubia or Marsa Matruh, were passed on through wad al-yad over the course of hundreds of years. This was the case throughout Egypt until 1805, when the Muhammad Ali Pasha dynasty started documenting land ownership — except in those border and marginalized areas. Even under Presidents Anwar Sadat and Hosni Mubarak, the state never documented land ownership in Sinai. Many believe this was because the state doubted Sinai residents' patriotism and feared they would sell the lands to investors from hostile countries such as Israel.

In February 2018, the North Sinai governorate imposed new requirements for legalizing property ownerships: For a Sinai resident to legalize their ownership of property, their land should have, before January 2012, been built up with houses or been used for agricultural purposes or for micro-projects — short-term, goal-specific efforts. Some Sinai residents have complained, however, that meeting the requirements hasn't guaranteed that the state will fulfill their requests.

The Supreme Administrative Court issued a ruling July 29 giving the Egyptian state absolute discretion and competence to determine and alter development policies related to lands acquired by individuals and private entities in the Sinai Peninsula.

The court also supported the state’s refusal to legalize the Canal International Land Reclamation Co.'s occupation of an area of 930 feddan (964 acres) in Sinai's Sharq al-Buhairat area. The company was planning a project for livestock and poultry development on land it had bought from Sinai residents. As is the case with most lands in the region, the owners have no legal documentation.

Ahmad Abdul Salam, a lawyer specializing in real estate and land ownership, told Al-Monitor that the court's ruling is faulty.

“The ruling granting the state absolute freedom in determining its policies related to … the occupation of lands owned without a title deed in Sinai is unconstitutional and inconsistent with the principle of equal opportunity between individuals and entities," he said, citing a clause in the constitution that says the state ensures equal opportunity for all citizens without discrimination.

“According to the ruling, the state has the right to regularize ownership of land [obtained through the wad al-yad system] for a given person and deny such regularization for another, even if they both meet the legalization requirements," he said. The ruling also applies to companies.

However, Mahmoud Kbeish, a legal and constitutional expert and the former dean of Cairo University’s law faculty, disagreed with Abdul Salam, contending that "wad al-yad is illegal in the first place."

Kbeish said, "The state may use its right to legalize ownership selectively to preserve public interest. The state apparatuses are the ones determining the public interest and how to achieve development," according to the constitution.

Amin Shaarawy, leader of the Bili tribe in North Sinai, told Al-Monitor that Sinai residents were happy that the state started legalizing their land ownership, describing this as a serious step toward achieving development. But he noted that the state legalized the ownership of some lands but not others, whether owned by individuals or companies. This led people to grow suspicious of the state’s intentions; many felt the government was granting favors or acting on grudges.

He added that even if the state rightfully believes some lands would be more appropriately used for big investment projects, or if it favors certain strategic or security considerations — given the proximity of the land to Gaza or Israel — it still must make fair restitution. It must "make sure that individuals, or even companies, who had acquired these lands through the wad al-yad system receive fair compensation," he said.

Shaarawy asserted that the state’s move to take lands from companies with no compensation raises investors’ concerns over the stability of the Sinai land situation.

Commenting on Shaarawy’s statements, a source at the Ministry of Local Development, who requested anonymity, told Al-Monitor, "The state is legalizing the ownership of lands on which houses were built, to protect families from homelessness. The state is also legalizing the ownership of lands housing agricultural projects, because such projects expand agricultural areas, which benefits the Egyptian community in general. The ownership of lands where micro-projects are established is also being legalized. These micro-projects help people earn their income in light of the deteriorating economic situation in Sinai due to decades of marginalization and terrorism.”

Specifically regarding the Canal International Land Reclamation Co., he said, "This was a livestock project on land that could be used for other purposes. As such, the project could be transferred to any other area while preserving the land [in question] for other purposes.”

Mohammad Farouq, the former director of the Egyptian Center for Economic Studies, told Al-Monitor, “The state’s policy in refusing to legalize ownership of some lands aims [in reality] to enable the state to put its hands on those lands, as a prelude to allotting them to large-business owners.”

According to Farouq, the state will justify this form of corruption by invoking national security considerations or by warning of the dangers of legalizing the ownership of some lands by specific residents or companies, under the pretext of them having ties with Hamas or Israel, or because of some companies’ associations with the Muslim Brotherhood.

Farouq said one issue that will discourage investments and projects in Sinai is failing to distribute lands according to fair standards. A second issue, he added, is the state assigning some lands to businessmen or Gulf princes, such as when the state gave lands to the king of Bahrain, Hamad Bin Isa al-Khalifa.