The Egyptian government made a show of providing compensation to thousands of displaced Nubians last month, but they still cling to the hope of returning to their lost land. 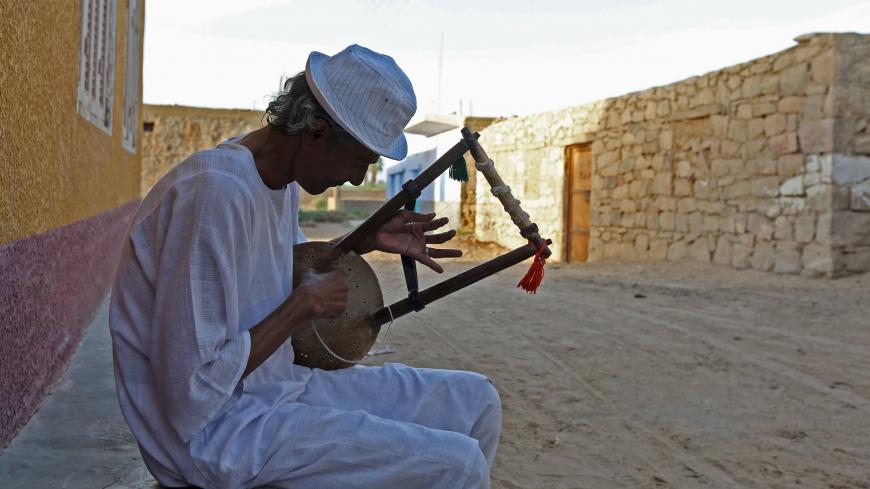 A man plays music on a traditional musical instrument in the Nubian village of Adindan near Aswan, Egypt, Sept. 30, 2015. - REUTERS/Mohamed Abd El Ghany

The high-profile ceremony Jan. 20 in which thousands of Nubians were officially compensated for their lost land was beyond their dreams. Nevertheless, some are still clinging to the possibility of returning to their ancestral land at Egypt's border with Sudan, no matter how slim this possibility may be.

It's been over a century since Nubians experienced their first displacement in 1902 when the construction of the Aswan Low Dam — currently known as the Aswan reservoir — began and they had to move from their ancient hometown stretched along the banks of the Nile River in southern Egypt. Still others were forced to move in 1912 and 1933, with the heightening waters of the Aswan Low Dam.

Then came the construction of the Aswan High Dam in 1963, which forced even more — some 55,000 people — to leave their historically affluent area.

Since then, Nubians have hoped to return to their land — although some of it is now underwater, some is part of a development project, and some villages are considered no-go zones and are being used for military purposes.

On Jan. 20, a ceremony in Upper Egypt's city of Aswan was orchestrated to show that Egypt was providing compensation for the Nubians displaced over the last century. A number of ministers, advisers to President Abdel Fattah al-Sisi and senior state officials were in attendance.

Prime Minister Mustafa Madbouly described Nubians as “an integral part of society” and expressed the government’s determination to “solve their problems," referring to Sisi’s directives to solve the problems of affected Nubians at the National Youth Forum in 2017.

"This is a response to our demands of many years," Khalil el-Gebaly, one of the beneficiaries of the current compensation, told Al-Monitor. The former head of the local council of Nasr El-Nuba Center — a body that deals with municipal affairs — Gebaly migrated to the agricultural town of Kom Ombo in Aswan at the age of 18 along with many others.

Gebaly, now in his 70s, explained that his father was compensated one house and some land after they left behind their four homes and 18 acres when they were displaced in the 1960s. But they are also being provided with cash in this new compensation cycle because they had not yet received all of the compensation they were entitled to, he said.

He noted the compensation will go to great-grandchildren who have deeds of ownership to inherit their deceased parents' or grandparents' lost properties from lands or houses or both.

Aadlan said he is not entitled to compensation because the list of the current compensation cycle includes those who were displaced in 1964 and not in 1933, as his parents had been.

According to the government, all of those affected by the construction of the reservoir and from the High Dam will be compensated gradually. A second call for requests will be opened in February, Aswan Gov. Ashraf Attia told the local media.

Meanwhile, Cabinet spokesperson Nader Saad stated Jan. 20 that "by the end of the second phase,” the government will have closed the file permanently and “found a fundamental solution to the problem of compensation for the people of Nubia."

A committee Sisi ordered established in 2017 on Nubian compensation matters said there were 11,500 Nubians eligible for compensation either with money or allocation of comparable lands and residences, according to an infographic published by the Cabinet Jan. 25.

Smaller numbers of Nubians require land, houses or a land deed for the areas they have settled in. Some 77 people said they would prefer to wait for a loan or financial aid under Sisi’s plan to pump investments of up to 5 billion Egyptian pounds (nearly $316,455 million) over the next five years into the development of southern Egypt.

Tentative attempts were made on behalf of Nubians in 2010 by President Hosni Mubarak, such as building 200 housing units as the first phase in Wadi Karkar village 9 kilometers (5 miles) south of the High Dam. But Mubarak — who was ousted in 2011 — did not really address the issue, and the Karkar village was far away from the Nubian homeland, Aadlan explained, adding it did not have employment services.

"The current compensation is satisfactory, but we have other demands, such as returning to the ancient land of Nubia, which is located from the High Dam to the borders of Sudan on an area of 370 kilometers (229 miles)," Gebaly told Al-Monitor.

He explained that all land located south of the High Dam represents the remnants of ancient Nubia, adding, "There is no infrastructure yet available for living there, so we want village councils to get established there to facilitate our transition."

Though chances seem slim, both Gebaly and Aadlan point out that the Egyptian Constitution guarantees their return to Nubia within 10 years.

Article 236 of Egypt's 2014 Constitution says the state has to develop border and underprivileged areas, including Upper Egypt, Sinai, Matrouh and Nubia. The second paragraph of the article says "the state works on developing and implementing projects to bring back the residents of Nubia to their original areas and develop them within 10 years in the manner organized by law.”

“We want to go because we have our roots, our civilization there,” said Gebaly. He added, "None of us will give up on our right to return to Nubia."