Egypt shows interest in Nubian community after years of marginalization

The marginalized Nubian community is back at the forefront in Egypt with a boat race festival to preserve Nubian heritage, held for a second time in Aswan governorate. 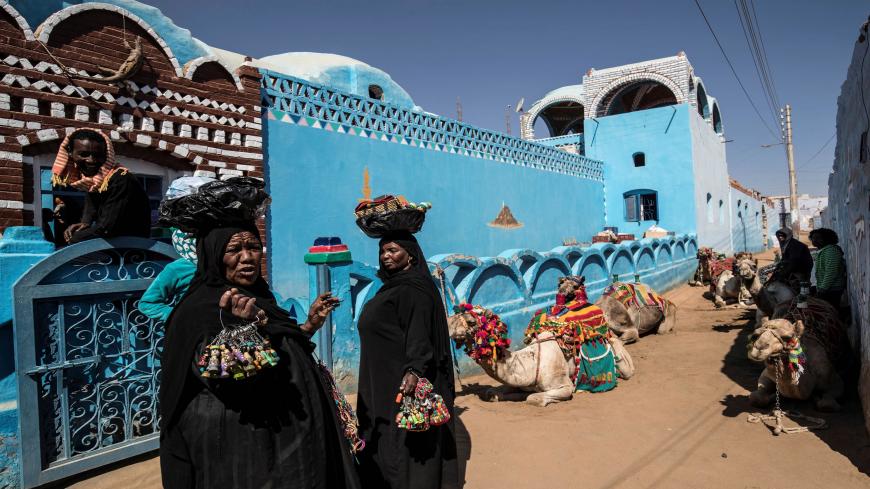 CAIRO — For the second year in a row, Egypt has organized the Guardians of the Nile Festival for Garaidi sailors in a bid to preserve the Nubian heritage, which constitutes an important part of Egyptian civilization.

The festival was held Aug. 3-10 under the auspices of the Ministry of Youth and Sports and the Talent Development Program in Upper Egypt — which was launched by the ministry in 2018 — in support of the Nubian community that has been suffering from marginalization for many years. Nubians welcomed this initiative and called for more steps along the same lines to restore their usurped rights.

The festival is organized by Hafsa Umbarkab, a young Nubian woman and founder of the Koma and Edi Campaign (A Tale in Time) to preserve the Nubian heritage and language. The campaign includes the Garaidi festival in Aswan governorate, in the far south of Egypt.

A Garaidi is a small narrow boat made of tin and wood that can fit one or two people who row the boat using small paddles. Nubian children sail their boats, which are inspired by the small boats made by ancient Egyptians to transport fruits through the canals, on the Nile River.

The festival was held in several villages and cities in Aswan, where Nubian children took part in a race.

Umbarkab told Al-Monitor that the festival was the product of an initiative launched by five young Nubians who pitched the idea with the Ministry of Youth and Sports via the Talent Development Program in Upper Egypt. The idea was greatly welcomed and approved.

The first festival was held in August 2019. Umbarkab said that the number of volunteers has increased this year and that the government’s sponsorship of the festival added a great value and facilitated many things such as obtaining the necessary permits and the needed advertising, which was beyond the organizers’ financial capabilities and budget.

Meanwhile, donations from individuals allowed Umbarkab to provide the necessary tools to build the boats and arrange prizes for the children who participated in the festival.

“The government’s sponsorship was a significant step and a clear indication of its interest in the Nubian heritage, which has been marginalized for many years. Nubians — like other Egyptians from Upper Egypt — have long felt alienated by the state. Things have changed now,” Umbarkab said.

She noted that she submitted a proposal to the governor of Aswan to organize the festival twice a year, during the winter tourist season and in the summer in order to boost the tourism industry. They promised to consider her proposal.

Awad Abdel-Zahir, a Nubian activist and founder of the Nubian Reunification Movement, believes the Nubians continue to be marginalized and their rights undermined despite the repeated state promises of development and care for the Nubian community. “Our reality is still the same. These promises are mere beauty slogans, but nothing has changed on the ground since the era of [Gamal] Abdel Nasser," he told Al-Monitor.

Abdel-Zahir said that the government’s sponsorship of the festival was a positive step, but “many Nubian rights have been ignored with total disregard for the sacrifices they have made to their homeland, whether during the kingdom of Egypt or even after the establishment of the republic.”

He added, “Many Nubians have been displaced from their lands on the bank of the Nile for the establishment of the Aswan Low Dam and the Aswan High Dam over 100 years ago. They were promised that they could return to their homes in the dam area, but this plan was not implemented."

Over the years, the Nubians have been repeatedly displaced from their lands in Aswan, starting in 1902 when the Aswan Low Dam (the first Aswan dam) to regulate the annual flooding of the Nile River was built, followed by another wave of displacement in 1912 when this dam was raised, and then again, in 1933, when the dam was raised once more. These construction works have led to the flooding of a number of Nubian villages and the death of dozens of workers. In 1963-64, when the High Dam was completed under Abdel Nasser’s rule, the government evicted 135,000 Nubians from their homes in 44 villages overlooking Lake Nasser. They were transferred to barren lands that were not suitable for agriculture.

Article 236 of the 2014 Egyptian Constitution provided for the development of the Nubian community and the implementation of projects to return communities to their homeland within 10 years.

“Nothing has been done so far,” Abdel-Zahir said. “The president assigned the government to compensate the affected people. The compensations, however, were only disbursed to those who provided documents proving that their properties were destroyed. Meanwhile, the vast majority — amounting to tens of thousands — were left with nothing after having been forcibly displaced, as they could not provide any proof.”

In January 2017, Egyptian President Abdel Fattah al-Sisi directed the government to allocate compensations to the Nubian community that has been affected by the dams’ construction, a project that has been repeatedly ignored by the successive governments over the years. In June 2019, some 11,700 Nubians received compensation.

Adlan hailed the gesture of the ministry as a significant step that underlines the state’s interest in restoring the Nubian rights and appreciation of this community’s great sacrifices to their homeland.

“I teach the Nubian language at the Egyptian Military Academy, which reflects the state’s interest in the Nubian heritage. Those affected have started receiving compensation. But the government has to find a solution for the majority of Nubians who do not have identification papers. Many industrial complexes are also being built in Nubia,” Adlan told Al-Monitor via phone.

Nubia, which translates in the “land of gold,” is located in the far south of Aswan governorate on the banks of the Nile River. According to a census conducted by the government in the early 1960s, the number of Nubians who hold Egyptian citizenship reached about 99,000. They have lost their lands and homes due to the building of the dams in Aswan, but the community seeks to preserve its language and traditions. Meanwhile, Nubians continue to call on the state to meet the yearslong promises to develop and ensure their return to their lands around the dam.

Yahya al-Kadwani, undersecretary of the parliamentary Defense and National Security Committee, said that the Nubian community is an integral part of the Egyptian fabric and that the state is keen on giving them their rights. “They only need to have some patience and not be influenced by those with anarchist ideas,” Kadwani told Al-Monitor in reference to some who are inciting the Nubians to call for secession from Egypt.

“The state — namely President Sisi — has prioritized the development of the Nubian community through the establishment of projects to generate job opportunities and provide the Nubians with a better standard of living. Since last year, those affected have started receiving compensation through the implementation of the president’s directives. The government is keen on solving their problems,” he concluded.