Will Nubian demands for return become calls for secession?

The Nubian people in Egypt are demanding their rights to return to lands from which they have been displaced multiple times through history, while some consider that they might also start calling for secession. 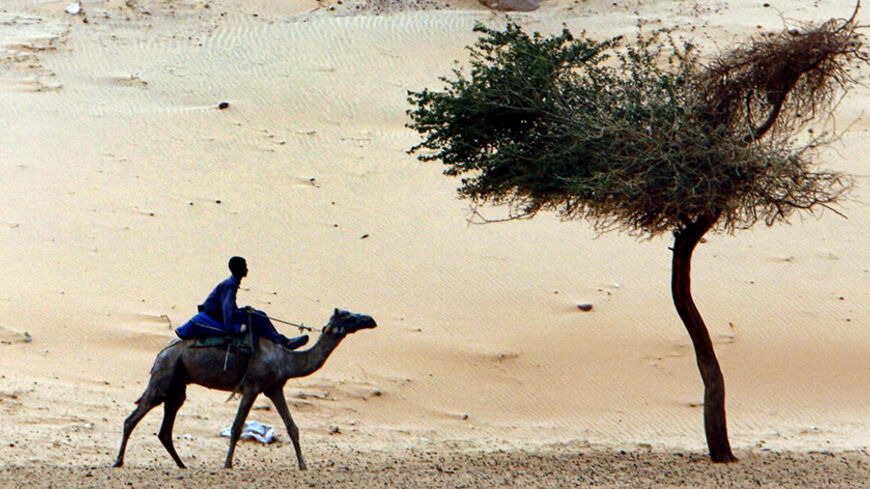 A Nubian boy rides a camel at the Nile River bank in Aswan, March 25, 2007. - REUTERS/Goran Tomasevic

More than half a century has passed since the displacement of the Nubian people from their land in southern Egypt. This was for the High Dam, which was threatening to submerge dozens of villages located behind it, to be built. Construction began in 1959, and the displacement of Nubian families from their villages to other villages far away from the dam started in 1963.

This was not the first time that the Nubians were driven out of their land for development projects to be built. It began in 1902 with the construction of the Aswan Dam, which led to a higher water level behind the reservoir, inundating and displacing 10 Nubian villages. The second displacement took place during the first overtopping of the Aswan Reservoir in 1912, which caused the water level to rise, submerging eight other villages. This was followed by the reservoir’s second overtopping in 1933, causing 10 other villages to be flooded. During the fourth displacement that took place from Oct. 18, 1963, to June 22, 1964, 18,000 families were moved away with the construction of the High Dam.

The Nubians have demanded that they return to their native land, but these demands have not been met so far. Did this demand evolve into a desire to secede from Egypt and to establish an autonomous state?

The answer to this question was given by Hagag Adol, a Nubian activist and writer. He told Al-Monitor that it was impossible for any of the Nubians' demands to secede from Egypt. Even if some have a desire for independence, the timing is currently inconvenient, as Nubians have more important demands, namely to return to their homes that they were forced to leave, and the talk about independence or secession undermines the return cause.

Adol said those circulating the idea of Nubia’s secession from Egypt want to deliver this message to the Egyptian people. He compared the allegations of secession to the anti-Semitism issue: Whenever someone criticizes Israel’s actions, he is accused of being anti-Semitic. The same applies to Egypt: Whenever someone speaks of the Nubians' right to return, he is accused of seeking to destabilize the country's security and calling for independence. This is designed to silence the voices demanding the right to return.

According to Ismail el-Iskandarani, a researcher at the Egyptian Center for Economic and Social Rights, the source of these rumors is the security bodies that formed, along with businessmen benefiting from the Nubians' non-return, a network of interests that includes non-Nubian senior army officers who want to get the Nubian land, given its high investment value. Therefore, they are circulating the idea that the Nubians’ return to their land will allow them to be close to Sudan’s Nubians, thus creating an ethnic bloc in the south. This would allow them to call for secession from Egypt, which would result in an Egyptian public opinion that is hostile to the demand for the return to ancient Nubia.

Iskandarani said there were Egyptian political officials who supported this network of interests by issuing statements warning of the creation of concentrations around Lake Nasser behind the Aswan Dam. The minister of water resources and irrigation described in a statement the establishment of agricultural or residential zones around the lake as “disastrous.” Iskandarani said that these statements were incorrect and were designed to achieve political ends.

He told Al-Monitor that some Nubian movements encouraged the Nubians’ desire to secede from Egypt, such as the Katala Movement, which according to its chief executive Osama Farouk, calls for the armed struggle for independence and to defend Nubian rights.

This movement was founded in November 2012, and includes a number of Nubian residents. Farouk told Al-Monitor that its main objectives were to defend the right of Nubians and restore their dignity by any means, even through the use of weapons. He said the movement refuses the internationalization of the Nubian issue, to prevent foreign countries from interfering in Egyptian affairs. At the same time, it does not mind resorting to international human rights organizations to restore the Nubians’ rights.

Under the rule of former President Mohammed Morsi, the movement had threatened to declare the area stretching from Esna city, south of Luxor, to the city of Wadi Halfa, south of Aswan, an autonomous Nubian region, and to display the tricolor Nubian flag — with the blue representing the Nile, yellow symbolizing the Western Sahara, and the green standing for the greenery in Nubia — in protest against not being represented in the Shura Council.

Farouk said Katala has halted its activities since President Abdel Fattah al-Sisi took office in 2014, and declared his support for the movement to preserve the country’s stability. The movement had sensed the sincere desire of the current authority to meet the Nubians demands, Farouk said.

At the practical level, Iskandarani, who is also a human rights activist, said that the reality does not support the idea of secession from Egypt, for many reasons. Most importantly, the area located behind the dam — which the Nubians want to return to — is not separated from Egypt by natural surface features to make it far away from the nation. Moreover, there is no external support that endorses this idea. Even the Nubians’ gatherings in the United States and Europe have no intention to accept the idea of Nubian independence. He said the calls of Sudan’s Nubians to turn the Nubian region between Egypt and Sudan into an autonomous state is absolutely rejected by Egypt’s Nubians.

Iskandarani said that everything done by the security and business networks, wich are impeding the Nubians’ return to their villages — including some Nubians who have interest in keeping the issue unresolved to preserve their presence in the media — will not last long with the adoption of the new Egyptian Constitution. Article 236 of the constitution stipulates, “The state shall guarantee setting and implementing a plan for the comprehensive economic and urban development of border and underprivileged areas, including Upper Egypt, the Sinai Peninsula, Matrouh and Nubia. This shall be made with the participation of the residents of these areas in the development projects, and they shall be given a priority in benefiting therefrom, taking into account the cultural and environmental patterns of the local community, within 10 years from the date that this constitution comes into effect, as regulated by law.” This is considered a commitment that the state shall meet.