As Egypt celebrated the 50th anniversary in May of the construction of the High Dam, which displaced thousands of indigenous Nubians, the affected have revived their calls for justice. 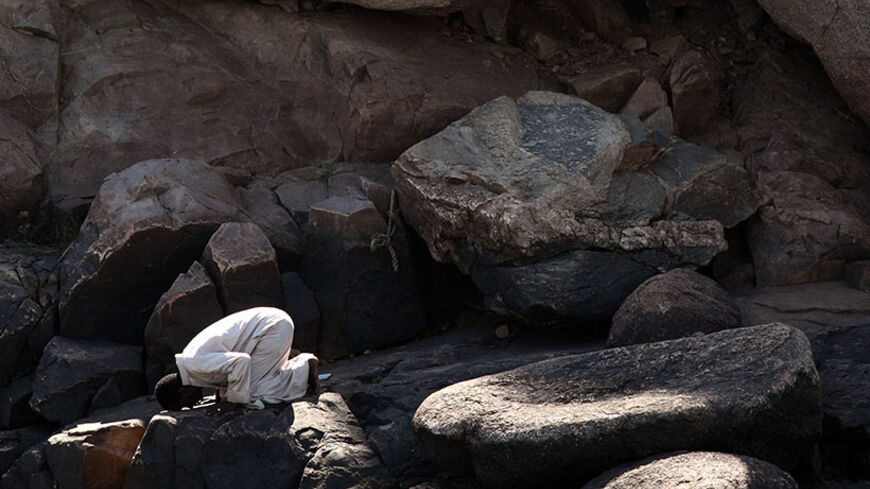 A Nubian man prays on rocks below the Philae temple complex near Aswan, Nov. 7, 2009. - REUTERS/Goran Tomasevic

CAIRO — Fifty years after the course of the Nile River was diverted for the construction of the Aswan High Dam, the people of Nuba in southern Egypt are still demanding the right to return and resettle on the banks of Lake Nasser. They were displaced when the dam project flooded their lands and villages in 1964, a harsh blow to Nubian heritage and culture in Egypt.

Last month, the Egyptian government celebrated the 50th anniversary of the diversion of the Nile and the start of construction on the Aswan High Dam on May 14, 1964. However, the government did not address the Nubian issue or resettle the people of Nuba on the banks of Lake Nasser, following unfulfilled promises since the era of the late Egyptian President Gamal Abdel Nasser. The first Nubian village to be relocated was Daboud in 1963. The displacement process ended in 1964 with the diversion of the course of the Nile.

Nubian writer Hagag Adul told Al-Monitor, "The lack of any talk about the rights of Nubians during the celebrations marking the anniversary of the High Dam is a strong indicator that this issue is being ignored again."

Adul had raised the Nubian issue internationally when he spoke about racist practices and "cleansing" of Nubians in Washington in 2005. He said, "The right to return to the Nubian environment on the banks of the Nile is the basis of our demands. We were not against the construction of the High Dam, but we were against the forced displacement, and Egypt's national security [will benefit] from giving Nubians their rights."

Adul, who was a member of the 50-member committee charged with drafting the new constitution, said, "We were able to achieve gains in the [new] constitution, whereby Article 236 obliged the state to return Nubian residents to their original regions within a period of 10 years. Furthermore, Article 53 criminalized discrimination between citizens on the basis of race or skin color, and this was intended to address [discrimination faced by] Nubians."

There are concerns, however, that the constitutional changes may not translate to implementation on the ground.

"There are centers of power in the Egyptian state that are working against the return of Nubians, so that [the state] can economically benefit from the nature of the Nubian land on the banks of the Nile. The Nubians must restore their organizational strength in Egypt, because any right that does not have a force to protect it on the ground will be lost," Adul said.

A number of Nubian activists have created pages on social networking sites to demand that the government ensure the rights of the Nubians.

Al-Monitor spoke with Abdel Daim Azzedine, a Nubian activist living in the Nubian Nasr Center in the Aswan governorate. He said, "The government must restore talks with the Nubian youth, because if the policies of ignoring us continue, we intend to take to the streets to demand our rights."

"The state has earned billions of Egyptian pounds from the High Dam, and received electricity, water and tourism. We, however, are the only losers in this project, and what is happening with us is nothing other than attempts at ethnic cleansing," he said.

According to Nubian activists, prior to the displacement, Nubian villages covered an area of 78,000 acres on the banks of the Nile in southern Egypt. Following the construction of the High Dam, successive Egyptian governments made promises to settle Nubians in new villages, but the new locations, such as Wadi Karkar City and the Nubian Nasr Center in Aswan, were far from the Nile in desert regions and lacked any sources of livelihood. This is the reason the Nubian people are still angry.

"A large number of Nubians refused the housing that was proposed for them by the state during the era of [former President Hosni] Mubarak, because it was far away in the desert. We saw this as a kind of marginalization," said Azzedine.

"We are not seeking to secede or take up arms and violence. … The illusion of separation is only in the imagination of the Egyptian security apparatus. But the continuation of policies of marginalization has prompted Nubian youth to resort to violence," he said.

Egyptian security leaders and the media continue to discuss Nubian secession attempts that sparked violence between two tribes — the Nubian Daboud and the Arab Banu Hilal — in Aswan governorate in April this year, leaving at least 23 people dead, according to official figures.

Egyptian President Abdel Fattah al-Sisi, who won the presidential elections just a few days ago, had met with a delegation of Nubian leaders in Cairo on April 1 during his campaign. However, he did not promise to grant their demands to resettle on the banks of Lake Nasser.

Nubian activists did not limit their work to the right of return for Egyptian Nubians alone. They also opened communication and made calls for coordination with Nubian activists in Sudan. The latter have also been harmed by the flooding of their lands in the areas of Wadi Halfa and the Nuba Mountains by water from the High Dam and Lake Nasser.

Al-Monitor spoke with Nayef Hamid, a Nubian activist from Sudan, during his June 2 visit to Cairo. He said, "The Nubian issue in Egypt and Sudan is a single cause, and the two governments have not previously had an agreement [on matters] such as [ethnic] cleansing and marginalization against Nubians," he said.

"There are still several attempts to falsify facts and history — to erase the demographic characteristics of the Nubian people — and to force Nubians from their lands by not developing these areas, and thus making them unsuitable for residents," he said.

In Sudan, there have been a number of movements against the construction of dams after the Nubians were harmed by the building of the High Dam. There were mass popular protests in the Nuba Mountains area against the construction of the Dal and Kijbar dams, which the Sudanese government has been trying to construct since 1995. These protests left four Sudanese dead, following clashes between protesters and state security forces on June 30, 2008.

"Our message to the Sudanese government is that in the event that attempts continue to eliminate the people of Nuba and build these two dams, there will be a civil war. Yet, we still carry out peaceful opposition through raising our issue before international institutions," Hamid said.

Nubian issues in Egypt and Sudan still represent a thorny subject, considered a hidden crisis that successive governments in Egypt have tried to deal with using security measures, for fear of the demands for secession the Nubians revive from time to time.