Plans to build and expand dams have not, for years, taken the Nubians’ land, heritage and culture into consideration, but is there still hope for the cultural minority? 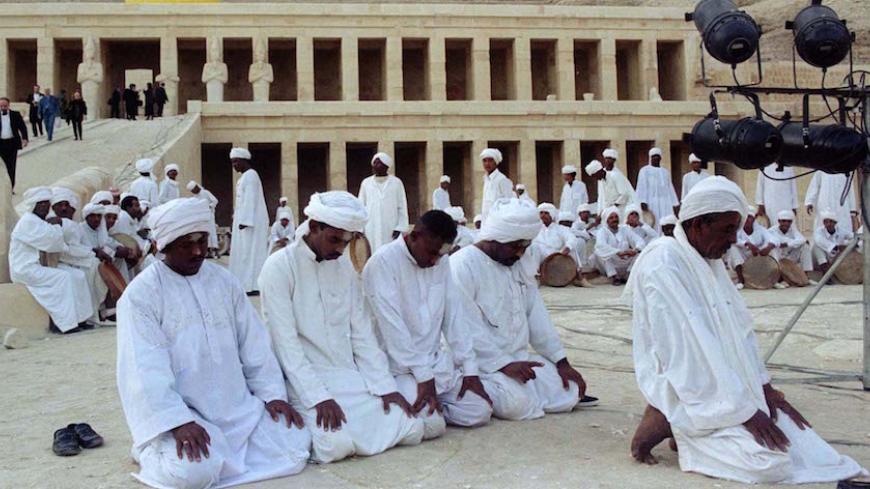 Members of a Nubian folk group perform a prayer Dec. 10, 1997, in front of the ancient temple of Queen Hatshepsut in Luxor. - REUTERS

CAIRO — It’s been 51 years since the Nubians were displaced from their land of origin, after the Aswan High Dam waters flooded more than 60 of their villages in 1964. Back then, the Egyptian government was determined to relocate everyone during the dam construction and said that they could go back to their villages once the construction of the dam was complete. Yet the government has not met its promise so far, said Ashraf Osman, head of the Nubia Supreme Council, in an interview with Al-Monitor.

Under the rule of President Gamal Abdel Nasser, the Egyptian government embarked on the construction of the High Dam and the Aswan High Dam Reservoir in order to protect Egypt from the risk of flooding from the Nile River and to generate electricity. These achievements came, however, at the expense of the more than 135,000 Nubians who had been displaced from their land where they had lived for thousands of years.

The Nubians consider themselves marginalized and isolated in society, providing as proof the neglect by the media, which do not defend them or speak of their cause to resettle in their villages. On July 10, the Nubians held a sit-in on the Journalists Syndicate stairs, where they raised banners that read “No to racism,” “I am a Nubian and I am proud” and “Nubia is the origin of Egypt.” They also raised pictures of some famous Nubian spots, which point to their authenticity and civilization. They demanded the issuance of express provisions criminalizing any racial discourse against any social category, based on color, gender, race or social status. Moreover, they called for the need to introduce Nubian history to the school curriculum, from primary school to university, in order to teach society about the importance, customs and traditions of Nubian civilization and put an end to racist attacks against them.

Nader Ibrahim, a 72-year-old Nubian, spoke to Al-Monitor about his displacement along with his family from their village. He said, “I remember when the government forced us to leave. I was a young man, I was under 20 years old. The government forcibly expelled us and promised that we could come back after the construction of the dam was complete. We left our vast farms, palm trees, our ancestors’ graves and houses, which were flooded. Yet some of the elders refused to leave and preferred to die in their houses.”

He added, “Then we moved to new areas that the government imposed on us, and we discovered that the construction of 65% of the houses had not been completed, and therefore, every 10 people had to stay in the same room.”

He continued, “I joined the armed forces in the October War, and worked as an [Arabic-]Nubian translator. I was awarded a medal by the armed forces at the end of my service. Yet the state could not care less about me and drove us away, without any shelter.”

Former member of parliament and Brig. Gen. Mohammad Hamed told the media, “All of the successive regimes in Egypt for more than 52 years have deliberately marginalized the Nubians and considered them as non-Egyptians. Moreover, the Nubian tribes have been treated badly since the rule of the late President Gamal Abdel Nasser, who expelled them from their land. The state has not recognized their rights and left them to extremist members who exploited their cause.” He added, “We have to ask all of the successive regimes that came to power in Egypt about the corruption and marginalization of the Nubians [that has lasted] more than 50 years.”

Oswan told Al-Monitor that Constitution Article 236 confirmed “[the Nubians’] right to return and the state’s needs to develop and implement a plan to achieve comprehensive economic and urban development on the disadvantaged border areas, including Nubia, and to implement projects allowing the Nubians to return to their area of origin and develop them. Therefore, what the government is doing is contrary to the constitution, and it needs to bring the Nubians to their area of origin and preserve their culture.”

For his part, Badr al-Din Chellali, secretary-general of the Egyptian Democratic Party in Aswan, told the media that 11 months ago, the party submitted to the Ministry of Transitional Justice a draft law that consists of more than 25 articles on the rights of return for all Nubians and their resettlement in their areas of origin on the banks of the lake in front of the High Dam. Yet the ministry has not replied so far and refused to give any reasons for the lack of response.

On May 28, hundreds of Nubians protested in front of the Cabinet headquarters and demanded that a law to resettle the people of the Nubia be issued quickly.

Al-Monitor went to the Ministry of Transitional Justice, which is responsible for the issuance of the law for Nubian resettlement, in order to learn the reasons behind its delayed issuance and the neglect of their rights and demands. Ibrahim Huneidi, Minister for Transitional Justice, had issued a decision on Oct. 28, 2014, to form a special committee in charge of discussing the Nubians’ demands and issuing a law requiring their return to their houses and areas of origin.

For her part, Fatima Siraj, a member of committee in charge of drafting the law, told Al-Monitor, “We abide by the constitution, and the ministry made all efforts for the return of the Nubians, and we recognize their rights of return to their areas of origin. We are already done with the draft law, after several sessions held with the Nubians to learn about the most important demands they have.”

She pointed out that the draft law stipulates the return of Nubians to their areas of origin and the development of their villages. She said, “This right is historic, and the new regime, which came to power following the June 30 revolution, has a real intention for their return. Yet we are waiting for parliamentary elections to be over and a new elected parliament to approve the law.”

She stressed that the ministry played its role to the fullest, and the parliament will make the next step for the law to be approved and implemented.