Will Abbas walk the walk on his threats to Israel?

Palestinian President Mahmoud Abbas will present his plan to end the Israeli occupation at the UN General Assembly, with PA officials warning they will launch a political campaign against Israel should the plan be rebuffed. 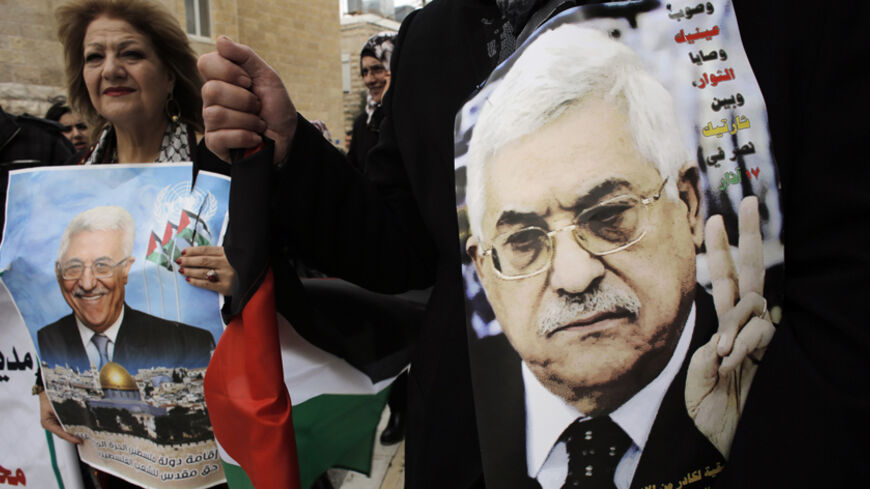 RAMALLAH, West Bank — Palestinian President Mahmoud Abbas is scheduled to address the UN General Assembly in New York on Sept. 26 with an overview of his political plan to end the Israeli occupation of Palestine.

Al-Monitor spoke with Jamal Muheisen, a member of the Fatah Central Committee, regarding what the coming weeks will entail. He said that the coming stage will witness a political clash between the Palestinian Authority (PA) and Israel, through the plan that Abbas will present to the UN Security Council and the General Assembly.

According to Muheisen, Abbas will also demand that the Security Council intervene to draw borders and issue a decision setting a time limit for ending the Israeli occupation.

This move comes after the failure of Palestinian-Israeli negotiations led by US Secretary of State John Kerry.

Wasil Abu Yousef, a member of the PLO's Executive Committee, told Al-Monitor that Abbas presented his plan to the PLO and obtained its consent.

Abu Yousef explained that the essence of the Palestinian plan, which garnered unanimous Arab support after Arab foreign ministers were briefed on its content, is based on reaching out to the Security Council and demanding the implementation of legitimate UN resolutions and international law practices.

Maj. Gen. Tawfiq al-Tirawi, a member of the Fatah Central Committee, told Al-Monitor that the US informed the Palestinian leadership of its rejection of the plan. Thus, achieving success in the Security Council will be nearly impossible.

Political analyst Hani al-Masri told Al-Monitor, “While the president's plan will receive support from various countries in the world, it will be rejected by the United States and some European countries; therefore, it cannot pass in the Security Council.”

The Palestinian leadership is prepared for an American veto in the Security Council, which was evident in Abu Rudeineh’s statement, in which he referred to this alternative plan and said "it is no longer possible to maintain the status quo."

Tirawi told Al-Monitor that in the event the plan fails, the Palestinian leadership will meet and take steps to respond to US-Israeli intransigence. The essence of the alternative plan lies in the idea of a political and legal clash with Israel.

Muheisen said that if there is no consensus on the Palestinian plan, they will escalate their political campaign against Israel in international institutions.

He added, "The political clash with Israel will be represented by joining 520 conventions and international institutions; heading to the International Criminal Court [ICC] and filing complaints against Israel and its leaders; escalating the popular resistance in the Palestinian territories against the occupation and the settlers; repudiating all obligations and agreements; and canceling security coordination with Israel."

The PLO Executive Committee also discussed in its meetings halting security coordination with Israel as one of the options to respond to the US and Israeli stance, according to Abu Yousef. There is a serious push internally to implement this option, he noted, since the PA cannot remain in the status quo, lacking power and sovereignty.

Masri, however, believes that what is needed from Palestinian leaders is a new national strategy based on changing the balance of power, and that the government should not engage in partial separatist tactics or steps as tools to apply pressure. He said that they should adopt a comprehensive approach based on national unity, strengthening the resistance against the occupation and the boycott of Israel, and going to the ICC.

Masri criticized the mechanisms of the Palestinian plan, asking, "Why should we head to the Security Council when we know the American veto will be waiting for us?"

He said: "It was necessary to gather all the Palestinian power cards, represented by supporting the resistance and the boycott of Israel; implementing the Goldstone Report and the advisory opinions of The Hague; going to the ICC; materializing Palestinian unity; and heading to the General Assembly. Then we would go to the Security Council from a position of strength."

Masri was also not convinced by talk that the PA might end its security coordination with Israel.

"The PA is not prepared to stop security coordination with Israel. They could force some tactical and partial steps in this area, but not a full process," he added.

Despite the political confrontations that are expected to occur in the coming weeks, the Palestinian leadership has taken a decision that they will not consider dissolving the PA. This contradicts earlier statements made by Abbas on previous occasions threatening to hand the keys of occupation to Israel.

Abu Yousef told Al-Monitor that dissolving the PA is completely off the table and has not been discussed during PLO meetings, especially after the recognition of a Palestinian state at the UN.

For his part, Amin Maqboul, the secretary-general of Fatah’s Revolutionary Council, told Al-Monitor that the Palestinian options involve reviewing all Palestinian commitments entered into the post-Oslo period, yet "dissolving the PA is not an option for us. This term does not appear in the Palestinian lexicon. The clash with Israel and a review of the obligations and duties carried out by the PA could push Israel to undermine the PA; however, the Palestinian leadership [is not considering] dissolving the PA."

The PA’s moves after Abbas' speech at the UN will be closely observed by the Palestinian public, who will see if the PA will walk the walk on its threats against Israel.