The Palestinian leadership is determined to submit its bill to the UN Security Council, despite pressure from some Arab states to delay it, and French moves to replace it with a European draft bill. 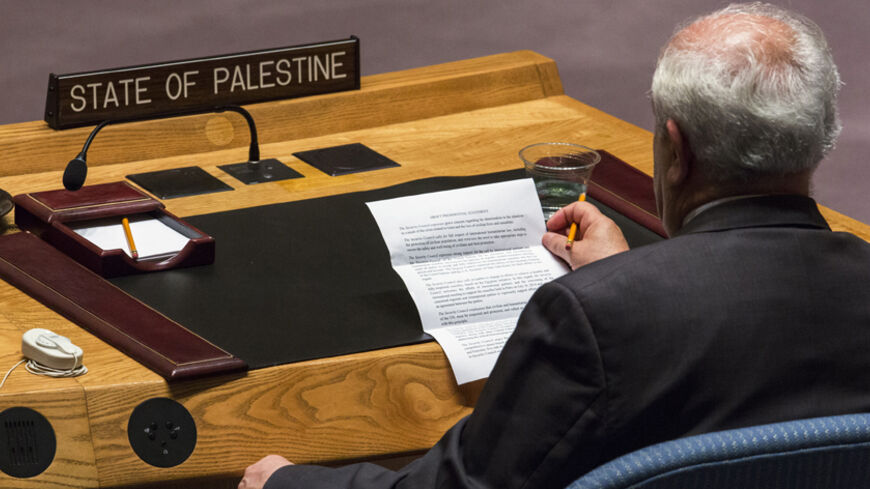 RAMALLAH, West Bank — The death of Ziad Abu Ein, a minister in the government of Mahmoud Abbas and head of the Anti-Wall and Settlement Commission, after a confrontation with Israeli forces near Ramallah, will provide an additional boost to the Palestinian plan to go to the UN Security Council and join international bodies to end Israel’s occupation.

On Dec. 10, the executive committee of the Palestinian Liberation Organization (PLO) said it would immediately seek to join the International Criminal Court in response to Abu Ein's killing.

Al-Monitor attended a celebration held in Ramallah on Dec. 7 to mark World Anti-Corruption Day, during which President Mahmoud Abbas reiterated that he would resort to the UN Security Council. “We have submitted a project that we will take to the Security Council at the end of the month. Whoever would like to participate in formulating the draft resolution is welcome. There is no point for delaying this further,” he said.

The Arab-Palestinian draft resolution was supposed to be put up for a vote in the Security Council at the end of November, but political deliberations delayed its submission.

Although Arab foreign ministers unanimously voted in favor of the Arab plan to end the Israeli occupation on the Palestinian lands at the Arab League on Nov. 29, some states have attempted to delay the draft bill’s progress.

Abbas noted that there has been some Arab attempts to delay in the submission of the bill, saying: “Some believed that it was not necessary to resort to the Security Council and saw that they must impede this step. We were told to wait, but I have a case that I want to put forward. Nothing else matters, and we will keep moving.”

Ahmad Bin Hali, the Arab League's assistant secretary-general, said that several states advised the parties to take their time before submitting the Arab-Palestinian bill to the Security Council. Hali asserted that there were deliberations with the Security Council members regarding this bill.

As previously reported by Al-Monitor, if the vote fails, the Palestinian leadership will resort to joining 520 conventions and international institutions; filing complaints against Israel and its leaders; escalating the popular resistance in the Palestinian territories against the occupation and the settlers; and reject all prior obligations and agreements and canceling security coordination with Israel.

Nimr Hamad, a political adviser to Abbas, told Al-Monitor that the political deliberations between the Arab states and France were among the reasons behind the delay in submitting the draft bill to the Security Council. France proposed amendments to the Palestinian draft bill to reach a unified text that everybody agrees on. Regarding whether the delay is related to the Palestinians wanting to ensure nine votes in the Security Council, Hamad said, “The nine votes still have not been ensured because the calls and deliberations with France, followed by Germany and Britain, are still ongoing in the hope of reaching a unanimous version to be submitted to the Security Council this month.”

Hamad said the draft bill will allow Palestinians to have a time frame set by the Security Council for ending the occupation and establishing a Palestinian state.

On Nov. 24, the Palestinian Foreign Ministry issued a statement, of which Al-Monitor received a copy, stating that the draft bill will be put up for the vote at the Security Council after proceeding with the attempts to close the negotiations with France, which is speaking on behalf of the European delegation.

France, Germany and Britain are trying to develop a draft bill to present to the UN Security Council instead of the Arab-Palestinian one. This bill determines the principles of the solution for the Arab-Israeli conflict and specifies a two-year period to complete the negotiations regarding a final settlement between Israel and the Palestinian Authority.

It seems that the Palestinians will reject the French draft bill as it stands, but at the same time they are giving the negotiations and deliberations with France their time. Foreign Minister Riyad al-Malki said on Dec. 10, “We won’t accept the French draft bill as it is because it reflects Israel’s vision of a Jewish state. We told them we are willing to deal positively with the bill, if it includes our amendments.”

“If France cooperates positively, we will move forward in this direction together. If the response is negative, however, we will set our own upcoming strategy, which includes immediately joining international conventions and institutions,” he said.

Jamal Mohaisen, a Fatah Central Committee member, told Al-Monitor that the Palestinian demand was delayed because of formal procedures that necessitate studying the suitable time frame to submit the bill. However, Mohaisen said the decision has been made and the bill was being examined by the legal teams of Security Council members. “We insist on the draft bill that we have submitted, despite the different compromises and opinions suggested here and there,” Mohaisen said.

The Palestinian action was taken in the wake of the failure of bilateral negotiations with Israel, under American auspices, and with the ongoing settlement construction on Palestinian lands. Regarding the impact of Israeli elections on the Palestinian bill, Mohaisen noted, “We slowed down the preparation of the bill until the end of the midterm elections in the US Congress. But, we won’t accept to wait until the Israeli elections and after them the American elections are done. It’s a never-ending process and we won’t accept this,” Mohaisen said. “So far, nobody in Israeli society acknowledges the full rights of the Palestinian people, including their right to establish a state according to the 1967 borders with East Jerusalem as its capital and the return of Palestinian refugees. We are not counting on any progress in the Israeli stance because it will remain below the expected level.”

PLO Executive Committee member Wasel Abu Yousef commented on the Arab pressure on Abbas to slow down the submission of the bill, saying: “Clearly, there is US pressure on some states, but the bill was finally and unanimously agreed on by all Arab states. The needed mechanisms are in place and we are only waiting for some logistical matters.”

The indications show that the Palestinian leadership seems serious about heading to the Security Council and international organizations, even though it is giving leeway for political talks with Arab and European countries to guarantee the success of the draft bill and gather the biggest number of votes in its favor.