Unity government at crossroads as Fatah and Hamas bicker

It didn’t take long after the war for Fatah and Hamas to air disagreements publicly over the reconstruction and management of Gaza. 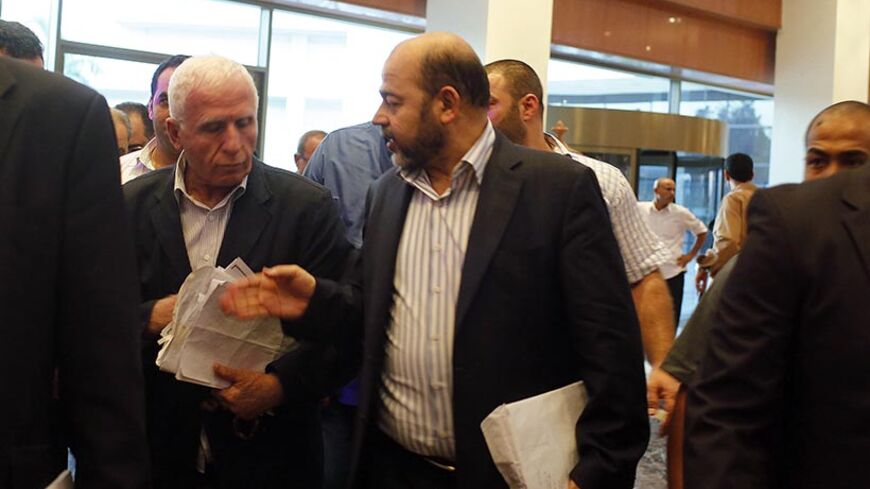 As soon as the latest war with Israel ended on Aug. 26, a new confrontation, although an unarmed one, erupted between Fatah and Hamas in the Gaza Strip. A state of tension has started to prevail in the Palestinian arena between Hamas and Fatah over the Palestinian response during the Israeli aggression in Gaza.

On Aug. 29, Palestinian President Mahmoud Abbas shocked local circles by blaming Hamas for the prolonged Israeli war on Gaza, since they had insisted on discussing the demands before the cease-fire and said that the Palestinian people were not willing to undergo a massacre every two years.

In an interview with Al-Monitor, a senior Hamas official said that the movement “has taken an internal decision not to respond to any comments that may cause tension in the Palestinian arena, including those attributed to Abbas.” The official renewed his refusal “to be dragged into side battles with any of the national parties, because we have significant milestones in the post-war phase and they all need a total internal consensus. Any setback in the unified Palestinian position implies further suffering to our people in Gaza, which we do not desire at all.”

But the situation in the West Bank has deteriorated, with Palestinian security apparatuses summoning Hamas members who were participating in festivals celebrating the end of the Gaza war in the cities of Ramallah and Tulkarm, on the evening of Aug. 30.

Hamas issued a statement calling on Fatah to immediately intervene to prevent these arrests.

Adnan al-Damiri, the spokesman for the Palestinian Authority (PA) security services in the West Bank, said on Aug. 31 that the festival organizers violated the law because some Hamas supporters appeared masked, resulting in the arrest of one of them, and the confiscation of the movement’s flags and banners.

The surprising escalation of tension between Fatah and Hamas immediately after the Gaza war coincided with the turmoil that erupted as the pay date for government employees in Gaza for the month of August approached.

This is while Moussa Abu Marzouk, deputy head of the Hamas political bureau, said on Aug. 31 that previous government employees in Gaza will be paid at the same time when all other employees will be paid, without any exceptions.

In an interview with Al-Monitor, a senior Palestinian official who spoke on condition of anonymity said, “The Palestinian Authority is not sure if it is capable of paying salaries of all employees of the previous Hamas government, because the salaries of the official government employees in Gaza and West Bank are scarcely available. This means that a severe financial crisis will probably erupt if the salaries of the employees in Gaza are paid.” The source refused to confirm or deny what Marzouki has said regarding an agreement between Fatah and Hamas in this regard.

Al-Monitor learned from Hamas internal circles that it was considering political and popular alternatives, which they did not reveal, to pressure the PA and coerce it to pay all of the employees' salaries without any discrimination, in particular the health, civil defense and interior ministries staff, who have suffered greatly during the war.

A third issue was also part of the latest disagreement between Fatah and Hamas, namely the reconstruction of Gaza after the war while hundreds of thousands of Palestinians remain in shelters in Gaza cities without being provided with any solution.

On Aug. 29, Abbas accused Hamas of forming a shadow government in the Gaza Strip, through the undersecretaries it appointed prior to the resignation of its government last June. This prevents the consensus government from working in Gaza because Hamas controls every single detail, including the aid provided to Palestinians. He emphasized that the consensus government will be responsible for the distribution of aid and relief materials as well as the reconstruction, through cooperation and coordination with international and Palestinian institutions. They will not allow any other party or shadow government to be in the Gaza Strip.

Sami Abu Zuhri, the Hamas spokesman in Gaza, told Al-Monitor: “Hundreds of thousands of Gaza residents are taking shelter in schools under difficult circumstances. What has the consensus government done for them? Has it worked to give them anything, and has Hamas prevented it? Thus, Hamas will not wait for the consensus government or any other party to help those who have been harmed by the Israeli aggression and it will spare no effort to alleviate their suffering. Those who want to consider our help for the people as a shadow government can do so. Therefore, a higher national committee consisting of all factions active in Gaza shall be formed in order to monitor the reconstruction process.”

An official within Hamas told Al-Monitor: “The next few days will be critical. They may place the Palestinian situation at a historic crossroads. The PA will either bring fresh blood to the fragile reconciliation, by either stopping the inciteful statements against Hamas and the policy of political arrests in the West Bank, or else we will be heading back to the state of division. [This would be] a result of the the regression achieved in the employees' salaries and the reconstruction issues. This is added to the border issue, which the PA has not yet taken a stance on, concerning the recent cease-fire agreement, which is exacerbating the suffering of the people.”