Hamas wary of international push for PA return to Gaza

Hamas is concerned that Egypt’s proposal facilitating the Palestinian Authority’s return to the Gaza Strip will be at the expense of the Islamist group. 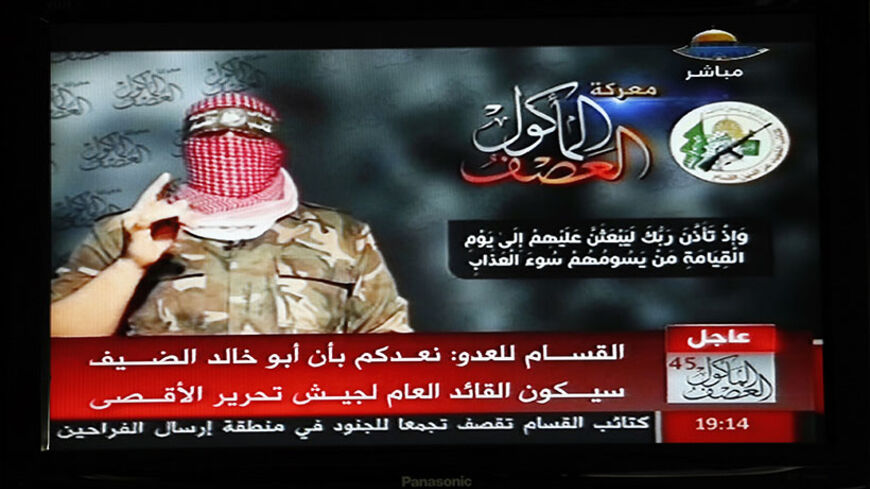 Abu Ubaida, the spokesman of the Izz ad-Din al-Qassam Brigades, is pictured on a television screen as he delivers a televised statement on Hamas TV in Gaza, Aug. 20, 2014. - REUTERS/Suhaib Salem

The Israeli aggression continues in Gaza, after the failure of the Cairo talks and Israel's failure on Aug. 19 to eliminate Mohammed Deif, the leader of Hamas' military wing, the Izz ad-Din al-Qassam Brigades. Then, at dawn on Aug. 21, Israel assassinated three al-Qassam leaders in Rafah, while Hamas threatened to escalate the confrontation with Israel.

Hamas is locked in the battle of Gaza and paying a heavy price. However, it looks like the Palestinian Authority (PA) is the one who will reap the fruits of this confrontation politically — amid regional and international agreements — to return to Gaza again, according to what was in the Egyptian initiative for a cease-fire.

In a previous article, Al-Monitor reported the emergence of signs that the PA might return to Gaza, with the arrival of the deputy prime minister of the consensus government, Ziad Abu Amr, [to Gaza] on Aug. 16. During the visit, he met with ministry representatives, all of whom were from Hamas.

A Hamas official, who spoke on condition of anonymity, told Al-Monitor, "[Hamas] sees that the PA's return to Gaza is a natural thing, immediately after the formation of the consensus government in early June. However, Israel and the international community are targeting the way in which the PA returns to crack down on Hamas, and change the political environment in the Strip. [They intend to] gradually reduce the influence of the movement, paving the way for the entrenchment of a security environment that puts Israel at ease, as is the case in the West Bank. [This will be done] through draining the sources of the resistance and preventing the flow of funds to it."

This comes amid the announcement of a European initiative on Aug. 7, which proposes the PA’s return to Gaza to rebuild the Strip and oversee the Rafah crossing.

Meanwhile, on the evening of Aug. 21, Germany, Britain and France began formulating a draft resolution in the UN Security Council to stop the Israeli aggression on Gaza, and which provides for returning Gaza to the control of the PA.

Al-Monitor spoke with an Egyptian diplomat following the Cairo negotiations. "It is natural that the PA will be the one who signs the final agreement for a cease-fire, as it is the legitimate party that is recognized regionally and internationally. This does not mean excluding Hamas and distancing it from the scene. However, [Hamas] is one of various political movements, while the PA is the official body that signs agreements and applies them, especially after Gaza returned to Palestinian legitimacy after the reconciliation agreement," he said.

Yet Palestinian sources said that Hamas has demanded that the truce agreement not be limited to just Israel and the PA. Furthermore, Hamas wants the formation of a national body to assist the PA in managing the crossings and reconstructing Gaza, as the PA is not able to bear these burdens alone. Meanwhile, Palestinian officials said that Hamas' demands were evidence that the movement was considering its own interests.

The same Hamas official added to Al-Monitor, "Hamas and other Palestinians have paid heavily in blood in this aggression, and it is not reasonable to entirely marginalize it in any agreement on the management of the Gaza Strip after the war. While it is true that the PA represents all Palestinians, it has been absent from the Strip for seven years. There must be a full partnership. It is not logical for one side to pay the sacrifices of the war, only for another side to come and take control of all matters, without regard to those who made sacrifices."

But a senior PA official who is close to President Mahmoud Abbas told Al-Monitor by telephone from Ramallah, "There are technical teams that have began preparing their papers to manage the files in Gaza, in particular: reconstruction, commercial crossings and Gaza government employees. We seek to complete these issues as fast as possible, in light of the catastrophic situation in Gaza, where hundreds of thousands of people have been made homeless after their homes were destroyed. We do not want to enter into administrative or political problems with the previous government headed by Hamas."

An international conference for the reconstruction of Gaza is scheduled for Sept. 22 in Cairo. There have been assurances that the money collected will be placed at the disposal of Abbas, who was entrusted with managing international aid.

However, a high-ranking employee in the Gaza government expressed his concerns to Al-Monitor regarding "the policy that the consensus government will follow for the reconstruction of Gaza, especially when it comes to a lack of speed in rebuilding destroyed homes, providing relief to those affected and its subjection to partisan political calculations. Thus [I am concerned] there will be a delay in reconstruction, to remind Palestinians in Gaza that the reason they are in this disaster is the war waged by Hamas, in preparation for early campaigning for any Palestinian elections to come."

As for the procedural steps for the PA's arrival in Gaza, it will begin with the transfer of 3,000 soldiers from the Presidential Guard from the West Bank to the Rafah crossing, while the national security forces will assume responsibility for policing the border.

Al-Monitor learned from an official at the Rafah crossing, who spoke on condition of anonymity, that in this situation members of the Hamas police will be absent from the crossing. This means that it will not be easy for Hamas members and their cadres to travel, as was the case before the movement took control of the Gaza Strip in mid-2007. The official expected that the so-called "list of those banned from travel," which is observed at the Rafah crossing by the Egyptian security services, would remain in place.

The most important issue in the return of the PA to Gaza is represented by the problem of paying late salaries of Hamas government employees, which Al-Monitor referred to in a previous article.

In an exclusive interview with Al-Monitor, Mohammed Sayam, the head of Gaza's employee union, called on Abbas to "issue a decree recognizing the [government] employees in Gaza, integrating them into a unified administrative and financial ladder and disbursing full salaries to them in exchange for their sacrifices in the war."

Yet the same official close to Abbas told Al-Monitor, "The [government] employees in Gaza will be able to receive their salaries naturally, like their counterparts in the West Bank, without going into the details of whether they are civilian or military [staff]."

It seems clear that the countdown to the PA's return to Gaza has begun, which presents Hamas with significant challenges in terms of how to deal with this, especially since the movement believes that it should be the favored one when it comes to the return because of the Gaza war that it waged. Both sides will be putting out feelers for the anticipated behavior of the other on the ground.