What does the future hold for Abdullah Gul?

Having been sidelined from the newly elected President Erdogan’s inner circle, Gul is resentful today, but may make a political comeback in the near future, depending on the performance of the Erdogan-Davutoglu team. 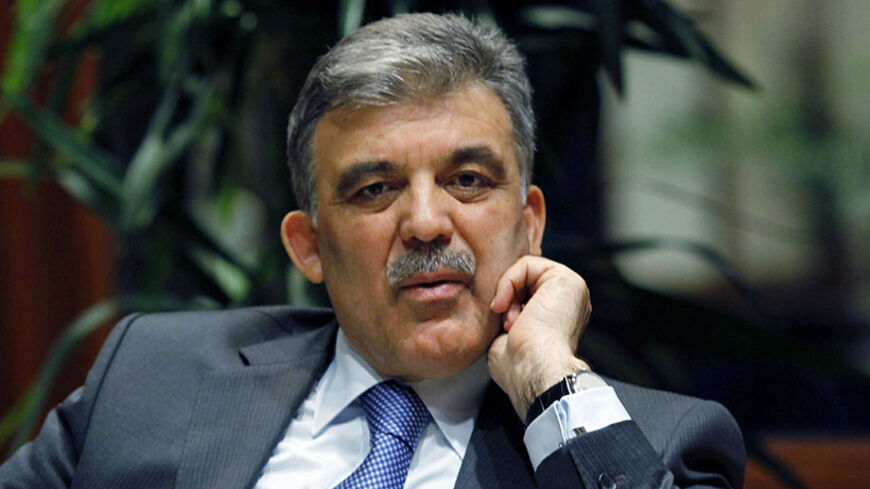 Turkey's outgoing president, Abdullah Gul, speaks to Reuters during an interview at the presidential palace in Istanbul, March 1, 2012. - REUTERS/Osman Orsal

With his political plans for the future thrown into uncertainty due to machinations within the Justice and Development Party (AKP), Turkey’s outgoing president, Abdullah Gul, is leaving office with a grudge against the inner circle of Prime Minister Recep Tayyip Erdogan, who will be sworn in as president on Aug. 28.

Gul now sees better how Erdogan loyalists operated behind the scenes for months to sideline him and ensure he did not assume any position in the AKP that might pose complications for Erdogan. Gul made his dissatisfaction over the situation clear while talking to reporters during his Aug. 19 farewell reception at the presidential palace.

Gul said he “faced great disrespect from within his own camp” in the lead-up to the Aug. 10 presidential election and after. His “own camp” is the AKP, of course, which Gul co-founded in 2001 with Erdogan.

The generally reserved outgoing first lady, Hayrunnisa Gul, also jumped in on the conversation. She said her husband was being polite and saying far less than he could. Refusing to shake the hand of a pro-government columnist — a staunch Erdogan supporter — Hayrunnisa said she would not hold back from speaking out in the future, adding, “I will start the real intifada [Arabic for uprising or resistance].”

These harsh words provide an earlier than expected signal that the AKP could face an inner conflict in the near future, given that Gul still has a considerable number of followers within the party, especially among the old guard. Gul has also said he intends to remain in politics and that he does not see a career outside the AKP.

He must be aware, however, that a political comeback in the AKP may elude him if Erdogan can keep his strong hold on the party after he becomes president. The remarks by Gul and his wife are nevertheless unlikely to have pleased Erdogan and his inner circle.

They are aiming to establish a “New Turkey,” to use their slogan, and are angered over any development that suggests the AKP could have a debilitating political struggle within its ranks. It is also evident that Gul has always promoted a more liberal and pro-European line than Erdogan.

He has not always agreed with Erdogan on issues pertaining to democracy and freedom, including freedom of the press and expression. Gul, a former foreign minister himself, has also been unhappy with the policies of Erdogan and Foreign Minister Ahmet Davutoglu, which have left Turkey regionally isolated and with few real friends in the West.

More significantly, Gul has made it clear he opposes a presidential system for Turkey, arguing that the current parliamentary one, which has a long history behind it, should not be scrapped but raised to European standards. He repeated this when talking to reporters during his farewell reception.

“I have said that I favor the parliamentary system. It can’t be denied that a presidential system is also a democratic one, but only if there are checks and balances,” he said.

It is not hard to see with such remarks why the Erdogan camp wants to ensure Gul does not assume a leadership position in the AKP. To start with, they ultimately desire a “leadership” system for Turkey, based on a ballot box victory and limited by as few encumbrances as possible.

Erdogan loyalists are obviously happy they have pushed Gul out of the picture for now, but can’t be certain of the role he might play after or before the 2015 general elections.

If Erdogan and Davutoglu falter on crucial economic, political, and social issues, and lead the country into further international isolation, an environment favoring Gul and his supporters in the AKP could emerge in the coming months. It seems that Gul will remain a complicating factor for Erdogan in the foreseeable future, unless, that is, Gul revokes his intention to remain in active politics and throws in the towel.

Tellingly, when naming Davutoglu this week as his choice to lead the AKP and become prime minister, Erdogan repeatedly underlined the need to maintain party unity and remain strong for the sake of the party’s political mission.

He needs a strong AKP after the general elections to fulfill his desire to transform Turkey into a presidential or “leadership” system. The current constitution does not allow for this, so he needs a strong turnout for the AKP to be able to change it.

He also needs an amenable prime minister in the meantime who will carry out his directives until the presidential system can be legally established, and Davutoglu is his choice. Davutoglu is expected to be the only candidate during the AKP’s extraordinary congress on Aug. 27, when delegates will elect the party’s new leader, only a day before Erdogan is sworn in as president.

Even the date selected for the AKP congress is seen as a slight to Gul, who officially leaves his office as president on Aug. 28. Many argue the date was intentionally brought forward to sideline Gul and ensure he does not assume any role in the party that might pose complications for Erdogan.

Gul was left in the unpleasant situation of having to resign as president only days before his term officially ended, if he wanted to attend the AKP congress as a delegate. He clearly could not do that for the sake of political propriety. This no doubt also fueled the resentment he and his wife clearly feel toward Erdogan’s inner circle.

During his farewell reception, Gul also revealed the name of Davutoglu as the next prime minister two days before Erdogan was to announce this officially. This also angered the Erdogan camp, diminishing as it did the effect Erdogan wanted to create when announcing Davutoglu on Aug. 21.

According to the rumor mill in Ankara, Gul made the announcement because he was annoyed that no one had consulted him, as a founding AKP member, on the party’s new leadership. It is said that Gul tried to remind everyone in the AKP in this way that Davutoglu was his protege to begin with.

Meanwhile, some argue that Gul should have stood more firmly against undemocratic steps by the Erdogan government, especially after the Gezi Park protests. They say he should not have signed the restrictive and undemocratic laws put in from of him by the government, which were later annulled by the Constitutional Court.

Gul signed those laws, including the restrictive Internet law, but threw the ball at the time to the Constitutional Court to decide on their constitutionality. But this did not prevent the damage to his credibility in the eyes of those who had come to respect him for his past remarks in defense of democracy and freedom.

Notwithstanding all of this, some sort of political struggle in the AKP — which, it seems, will be as much about personalities as it is about principles — does not appear that remote a prospect, even if Erdogan and his inner circle are trying hard to downplay this.

It will all depend on how the Erdogan-Davutoglu team performs prior to the general elections. Its failures will clearly favor Gul. The corollary, however, is that its successes will most likely send Gul into early retirement, with all the grudges and resentments he bears now.