The AKP sees itself as the embodiment of a holy mission, which is willed and perhaps even predestined by God. 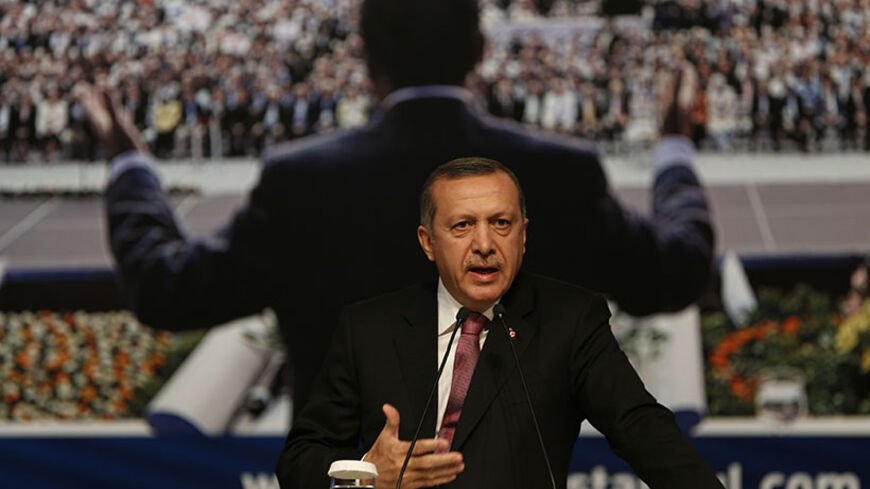 Turkish President-elect Recep Tayyip Erdogan, who's also the leader of the Justice and Development Party (AKP), makes a speech during a party meeting in Istanbul, Sept. 22, 2012. - REUTERS/Murad Sezer

In a much anticipated event Aug. 21, Turkish President-elect Recep Tayyip Erdogan announced his successor as prime minister: Ahmet Davutoglu. Known as the mastermind of Turkish foreign policy since 2003, Davutoglu then gave a short address. Thanking his colleagues, the academic-turned-politician also made remarks about the meaning of the mission of his party, the Justice and Development Party (AKP). He said:

"The AKP began as the movement of a generation, but it is not limited to a generation. It is not even limited with generations and centuries. It is the name of a struggle for justice and right that originates from the depths of centuries and which will continue until the end of times."

In the same speech, Davutoglu also referred to the AKP saga as a "sacred march." Despite those who want to halt it, he said, such as “the parallel structure or whoever else,” this “sacred march will reach its destination.”

In fact, not just Davutoglu but most other AKP spokesmen, including Erdogan himself, have been using the term "sacred march" in the last two years. In August 2013, for example, Erdogan defiantly declared to the Gezi Park protesters, “Whatever you do, you will not be able to stop our sacred march.”

As a longtime observer of the AKP (and often a supporter of it, I must say) I need to note this is a new rhetoric for the party, which for 10 years (2001-2011) had more modest self-definitions. When the AKP campaigned for the general elections of 2002, for example, it promised good governance and economic development. In 2007, it campaigned for “full democracy,” with an implied promise of ending military tutelage over politics and more rights for everyone. In 2011, it promised maintaining economic stability, bringing “peace” by ending the Kurdish conflict and drafting a new “civilian constitution.” But now it is promising a “sacred march” that is rooted deep in history and is destined toward a very far future.

Other recent propaganda themes of the AKP also underline the same vision. In the two elections this year (local elections of March 30 and presidential elections of Aug. 10) some of the giant posters of Erdogan included three milestones in the distant future: 2023, 2053 and 2071. The first of these three dates, 2023, is the centennial of the Turkish Republic, and Erdogan apparently plans to still be in power then by winning the presidency for the second time in 2019. But what about 2053 and 2071, which Erdogan, like many of us, will probably not see?

For anyone with a basic knowledge of Turkish history, these dates are obvious references to 1453 and 1071 — or the conquest of Istanbul by the Ottomans, and the beginning of the conquest of Anatolia by their predecessors, the Seljuks. They also mean that the AKP hopes to stay in power until 2071, at least, if not the whole 21st century, and leave a groundbreaking mark in history.

The bottom line in all these themes is that the AKP sees itself as the embodiment of a holy mission, which is willed and perhaps even predestined by God, and which is destined for glory despite all the odds and obstacles. It is a political-religious vision with some interesting parallels to the 19th century American notion of “manifest destiny.”

To be sure, much of this AKP narrative about “the sacred march” is propaganda that appeals to the sentiments of Turkey’s conservative voters, who, after decades of marginalization and humiliation by secularists, yearn for pride and glory. It is, in other words, more sentiment than strategy. However, the very existence of this narrative influences the AKP’s current strategies, or at least its political behavior.

The most practical (and harmful) result is the demonization of the AKP's opponents. If the AKP’s mission is a “sacred” one, then those who stand in its way are not just political actors with different views and interests, but malicious forces that conspire against the obvious good. Therefore, they cannot be reasoned with. They just need to be weakened, defeated or even crushed.

The second problem is that the narrative of a “sacred march” makes the AKP immune to criticism — because, besides small personal errors and shortcomings, how could a cause which is “sacred” go wrong?

The third problem is that the same narrative disallows intra-party democracy within the AKP. Any dispute with Erdogan is branded as “fitna,” which is a very negative Islamic term that denotes conflict among believers.

In other words, the narrative of a “sacred march” might be helping the AKP to keep emotions high and galvanize the party base, but it does not help making the party conscious of its mistakes, shortcomings and its true potential. It only helps deepening the polarization in Turkish society between those who celebrate the AKP’s “sacred march,” and those who feel increasingly alienated, if not threatened, by this triumphant rhetoric.

So, if I may suggest, why not just go back to days of more humble themes — such as democratization, economic growth and good governance? The very history of the AKP is proof that they worked.