Bulent Arinc-Melih Gokcek dispute reveals fissures in the ruling AKP ahead of the June 7 election; the Turkish military reiterates its determination to fight the PKK. 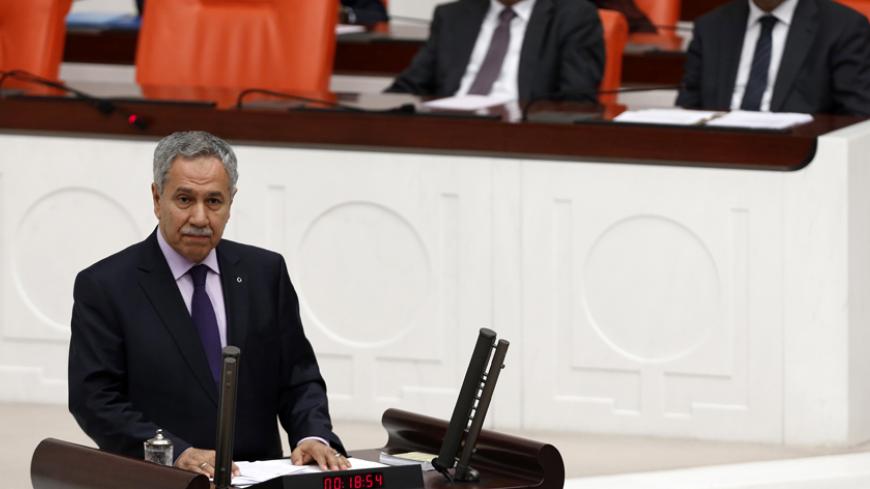 Last weekend witnessed the most important and serious crack in the Justice and Development Party (AKP), Turkey's ruling party, when Deputy Prime Minister Bulent Arinc engaged in a heated public argument with fellow AKP member and Ankara Mayor Melih Gokcek. Only 75 days before the general elections, such a crack cannot bode well for the party’s fortunes. While the AKP’s ultimate power does not appear to be contested by any other contender, the party could lose its majority in the next parliament and the ability it has had since 2002 to form the government by itself.

But such an election would only be possible if the pro-Kurdish People's Democracy Party (HDP) surmounts the high electoral threshold of 10% or the party at the furthest right end of the political spectrum, the Nationalist Action Part (MHP) raises its percentage to about 18%.

The crack in the ruling party could accelerate such possibilities. The most plausible election forecast today is that the AKP will not win another parliamentary majority and thus be obliged to form a coalition government.

The end of the AKP’s one-party rule would be very decisive not only in shaping Turkey’s post-2015 political landscape but also its increasingly volatile neighborhood.

Party Chairman and Prime Minister Ahmet Davutoglu stepped in to resolve the conflict that pitted Arinc, an AKP elder who's also the government’s spokesman, and Gokcek, who has headed Turkey’s capital since 1994, against each other. Davutoglu said it's unbearable to have such polemics between the two officials aired in public and was putting an end to it after talking in private with both. He added that he will exercise disciplinary measures if it happens again.

So, can anybody be relieved that the crisis in Turkey’s ruling party has been overcome thanks to the intervention of Davutoglu?

Many people within the ranks of the AKP are trying to mend the differences exposed by the harsh remarks of Arinc and Gokcek, underlining that “fitna” ("sedition" is the most fitting translation) cannot prevail in an Islamist party where unity for the cause is upheld over anything else. But critics of the AKP such as political analyst Cengiz Aktar say the AKP "is a coalition of interests" and that what has happened “is certainly a crack in the beautiful facade of harmony of the AK Party, but [Arinc] has not and likely will not aim to destroy the ranks of the party so shortly before the elections.” Still, the crack in the AKP is much deeper and wider than many would think or wish to see.

It got even deeper and wider because it has something to do with the soul of Turkey — and because it, perhaps prematurely, revealed a structurally unbridgeable gap between President Recep Tayyip Erdogan and the government whose blind loyalty he needs to attain the “Turkish-style presidential system” as he defines it and seeks for himself.

For such a presidential system, a new constitution or an overhaul of the constitution is needed. To amend the constitution, Erdogan needs the support of some 400 MPs. Thus, if the AKP wins the elections overwhelmingly, the party's new leadership under Davutoglu will be presumably willing to transfer all its powers to Erdogan and to reconcile themselves with very diminutive status under ever-strengthened President Erdogan.

Such a rift in the power structure in Turkey was already expected to occur (and has been wished for by many in the opposition) in the aftermath of the June 7 election. But the already existing fault lines within the AKP (or between Erdogan and the AKP government) have transformed into ever-deepening and widening cracks much earlier than expected.

The prime fissure has become the differences on handling Turkey’s No. 1 issue, the Kurdish question. March 21 was the date for jailed Kurdistan Workers Party (PKK) leader Abdullah Ocalan to issue a historic statement in which he would call for a “farewell to arms” for his organization, which would be manipulated by the government and the ruling party for the electoral success of the AKP. Naturally, such a statement would be the product of a deal reached behind the curtains. At a joint meeting of an HDP delegation that had just come back from visiting Ocalan in prison — in the presence of a deputy prime minister, the minister of interior, AKP’s majority whip and a high official in charge of public security — Ocalan’s intention to call on his organization to convene a congress before the elections to declare an end to the 40-year-old armed struggle in Turkey and for his “10 principles” to be negotiated for the ultimate resolution of the Kurdish question was read aloud by a HDP MP in front of TV cameras.

However, only a few days before Ocalan’s so-called historic statement of March 21, the first day of the Kurdish new year, Erdogan declared that “there is no Kurdish question in Turkey.” He also made a “historic” speech at the War Academy on March 18, where he confessed his repentance for the wrongdoing done during his tenure as prime minister against the armed forces. He said openly that he was hoodwinked by the “parallel state,” a reference to the Gulenist movement that he accuses to perpetrating a “coup” against him; the group has been “public enemy No. 1” for Erdogan for more than a year.

His seeming “confessions” before the uniformed high ranked officers has been widely interpreted as Erdogan trying to mend fences with the military and changing alliances in the power equation of Turkey.

A day before Ocalan’s public message, Erdogan criticized the commitment of the government to form a “monitoring committee” to be present in the designed negotiations with Ocalan and his team in the near future. He declared all these to be unnecessary concessions to Ocalan and his side, while not naming him directly.

Ocalan’s statement remained short of expectations. Yet Arinc stole the show that day with a quite strongly worded criticism of Erdogan. Arinc criticized Erdogan of meddling in the government’s business and insisted that the government would move ahead with its own decisions and commitments concerning the “peace process” even if they don't suit Erdogan’s emotions.

Gokcek then stepped in from nowhere and directed a very harsh criticism of Arinc in defense of Erdogan.

Soon after, on the evening of March 23, Arinc retorted with a live televised news conference, using the strongest words ever employed by an AKP politician against a fellow party member, accusing the mayor of Turkey’s capital city of corruption and nepotism and of “selling Ankara to [the Gulen movement] plot by plot.” Arinc said he was ready to expose Gokcek’s wrongdoings, but that he would do so only after the June 7 national elections in order to avoid any damage to the government and the party’s election chances.

Corruption and nepotism are very sensitive words and even code words used against Erdogan by Turkey’s opposition, and also by Gulenists. Hence, many observers were apt to interpret Arinc’s remarks as being ostensibly against Gokcek but in reality targeting Erdogan himself. Arinc is well known as being above any accusation concerning corruption.

In the dust of the turmoil of the intra-party debate that erupted over the weekend, the collateral damage may have been inflicted on the Kurdish peace process, although a thorough assessment has not been made yet because of the dizzying speed of developments. However, for the careful eye, the official statement of the Turkish General Staff issued March 23 was not missed.

The military, after a long period of silence, and interestingly only two days after Ocalan’s statement and the criticism of Arinc about Erdogan’s meddling in the government’s commitments to the Kurdish side, strongly rejected any speculation of its cooperation with the PKK and its Syrian affiliate, the Democratic Union Party (PYD). Alluding to Ocalan, the military said the armed forces will never see him as a counterpart in the quest for the resolution of the problem and underlined the determination of the military for confronting and fighting the “terrorist organization” — in Turkish official parlance, the PKK.

And on March 24, again after a long interval, a military communique announced that the armed forces had begun an operation against PKK elements in the Mazidag countryside, in Turkey’s southeast, presumably in a stronghold of the Kurdish movement.

By all means, the cracks in Turkey’s ruling party will have much wider ramifications in and around Turkey.

The predicted aftermath of the elections in Turkey arrived nearly three months earlier than their scheduled date.