A few years ago, three powerful men — Erdogan, Gulen and Ocalan — had a say in Turkey’s future, but now Erdogan has emerged as "the man” charting the country’s course. 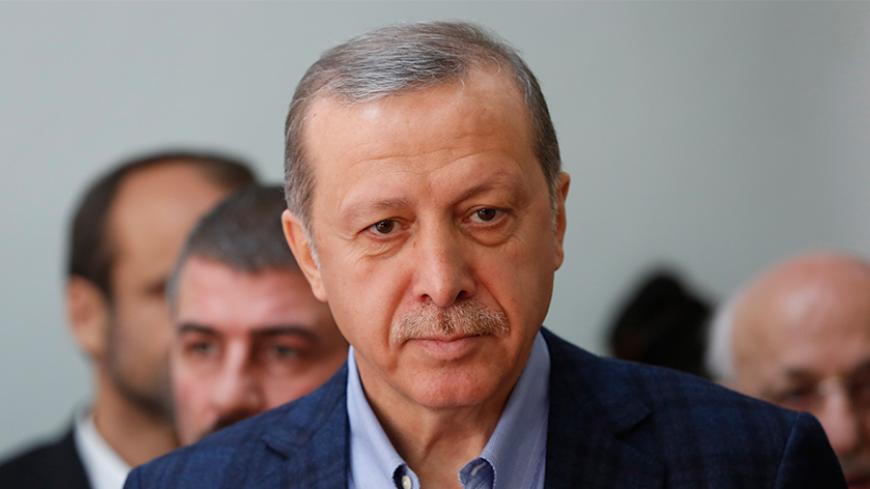 In a March 12, 2013, article for Al-Monitor, I wrote, “Turkey’s future is to be decided by the nation's three most powerful men, by the equilibrium they shape among themselves and by deals they forge with each other.” The three powerful men at the time were then-Prime Minister and Justice and Development Party (AKP) Chairman Recep Tayyip Erdogan; the Kurdistan Workers Party (PKK) jailed founding leader, Abdullah Ocalan; and Islamic preacher Fethullah Gulen, the head of the Hizmet Movement or “the Community,” who lives in self-exile in the United States.

The three men owed their power to a number of common characteristics. They all wielded enormous clout and charisma over their followers, had extraordinary organizational talents and entertained distinct visions for the future and projects for an alternative society. Their interactions, I argued, would determine Turkey's course.

After all the extraordinary developments Turkey has been through since 2013, including the AKP’s unexpectedly big victory margin in the Nov. 1, 2015, elections, I can now assert that Erdogan, using all his power and doing whatever it takes, has managed to overcome all obstacles to become "the man." Gulen and Ocalan have emerged the losers, far behind where they stood in March 2013.

For Erdogan, 2013 was an annus horribilis. The first threat to his political power came in June with the Gezi Park protests, in which more than 3 million people took part in 80 of Turkey’s 81 provinces, according to police figures. The anger boiling over in the streets targeted Erdogan directly, rather than the AKP. Pushing aside the party’s moderates, Erdogan suppressed the monthslong demonstrations with disproportionate and bloody police violence that overrode the basic rights and freedoms enshrined in the constitution.

In December 2013, Erdogan was shaken again, this time with corruption probes that targeted government ministers, members of his family and business cronies. The resulting evidence, including wiretaps — apparently the product of an extensive pursuit and investigative work by the Gulen community’s network within the police and the judiciary — spoke of corruption and bribery at a scale unprecedented in Turkish history. It was an existential challenge not only to Erdogan’s rule but to him as a person, and it galvanized him to strike back with all the power he wielded over the state, politics and the media. The police operations and probes were blocked through overt and direct interventions with the judiciary and the de facto suspension of constitutional provisions.

Erdogan and the AKP emerged victorious from the all-out war they mounted against the Gulen community after the probes. Over the past two years, thousands of judicial officials and police officers deemed to be linked to the community have been removed from office, often unlawfully. Many have been expelled from their professions altogether, and some have been charged with membership in a “terrorist organization” led by Gulen.

The Gulenist media took some of the heaviest blows, including the seizure of the Koza Ipek business group, which owns two newspapers and two TV channels. Many journalists from Gulenist quarters were detained, including five who remain behind bars on charges of espionage and running a terrorist organization. Most recently, on Nov. 15, 13 television and radio channels of the community’s largest media group, Samanyolu, were removed from the state-owned Turksat satellite.

In a clear sign that the government’s war would not be limited to Gulenist media and Gulenist followers within the state, police on Nov. 6 raided the Ankara offices of the Turkish Confederation of Businessmen and Industrialists, the umbrella group of Gulenist entrepreneurs. Similar raids on educational institutions linked to the community have already become a virtually routine occurrence.

In sum, Gulen is today a leader whose power and clout within state and society has dramatically diminished. The movement he built since the 1970s is being gradually dismantled by the Erdogan government.

As for Ocalan, he has been in prison since 1999 but has perhaps been the world’s most influential inmate. One has to recall that “the peace and settlement process” had officially kicked off March 21, 2013, when a message from Ocalan urging the PKK’s armed units to pull out of Turkey was read to hundreds of thousands of Kurds at Nowruz celebrations in Diyarbakir.

The government made a political decision to recognize Ocalan as an interlocutor and placed him at the center of the process. Hence, the process was named after the island of Imrali where Ocalan serves his life sentence in a special prison. The Imrali process, however, had one very important weakness that jeopardized its sustainability. That problem stemmed from Erdogan.

Erdogan built a link of conditionality between the Imrali process and the introduction of the Turkish-style presidential system he aspires to, with that bridge being a constitutional amendment. He made the PKK’s disarmament a precondition for any steps forward, thus deadlocking the process. Ankara refused to take any consensus-building or administrative steps during the process, which ended in July 2015 with Turkish warplanes launching massive raids on PKK targets in northern Iraq. Citing Ankara’s reluctance, the PKK had already suspended its withdrawal from Turkish territory in September 2013.

Erdogan’s ultimate decision to end the Imrali process was precipitated by the pro-Kurdish Peoples’ Democratic Party’s (HDP) decision to approach the June 7 elections as a party instead of fielding independents and to build its campaign on the slogan “We won’t let you become an executive president.” As the HDP passed the 10% national threshold to enter parliament, the AKP lost a considerable number of seats, making Erdogan’s objectives more difficult to attain. To make up for the expected losses, Erdogan set his sight on the nationalist vote and changed his tune. He was now saying, "There is no Kurdish problem," thus knocking over the negotiating table. His ire led to a halt in meetings between Ocalan and his lawyers, who used to carry Ocalan’s messages to the PKK. Ocalan’s isolation, which began in April, continues to date.

Amid the reignited conflict, many cities and towns in the predominantly Kurdish southeast are today the scene of destruction and bloodshed. Even if the clashes were stopped tomorrow in favor of talks, the new peace process could hardly be called “the second Imrali process.” This is because Ocalan’s loss of ground and power did not result solely from Erdogan’s moves. In a new shift since the Islamic State’s (IS) seizure of Mosul in June 2014, the PKK leadership, based in Iraq’s Qandil Mountains, and the Syrian Kurds’ Democratic Union Party have emerged as the real allies of the United States, Russia and Iran against IS on the ground. The new situation has empowered the PKK leadership as never before, making it harder for Ankara to have Ocalan as its only interlocutor and continue on its way relying on Ocalan’s power and clout over his organization.

In sharp contrast to 2013, 2014 was Erdogan’s annus mirabilis. In the municipal polls in March last year, the AKP lost 7 percentage points of its electoral support but retained the country’s two biggest cities, Istanbul and Ankara, thus emerging psychologically unscathed. Then, in August, Erdogan won 52% in the first round of the presidential elections, becoming Turkey’s first head of state elected by popular vote. No doubt the opposition’s ineptness played a big part in these election victories. Erdogan’s ascent to the top postmarked Turkey’s shift to “a de facto presidential regime,” as he put it.

By mid-2015, the strains of economic woes, the burden of corruption and the negative image of Erdogan’s new, pompous palace had a combined impact on the electorate, which led to a fatigued and worn-out AKP losing its parliamentary majority in the June 7 elections. Yet, Erdogan refused to give up. He stymied efforts to form a coalition government and took the country to another election Nov. 1.

Meanwhile, press freedom in Turkey had hit an unprecedented low under multifaceted government pressures employed as another election-winning tool.

Gripped by fear over the revived conflict with the PKK and terrorist attacks attributed to IS, conservative and right-wing voters pinned their hopes on a strong, one-party government again and handed the AKP an election victory that exceeded even its own expectations.

The process that made Erdogan Turkey’s “one and only powerful man” has taken a heavy toll on the country’s constitutional and legal order, its democracy and institutions. Each time Erdogan lost some power, he moved to regain it using all his remaining power, at whatever expense. He might have stepped back at times, but he never chose to reconcile, always playing the zero-sum game. As a result, the AKP government has today become an Erdogan regime. And after the Nov. 1 elections, the only things that can stop this regime now are its own mistakes and structural weaknesses.