The underlying question in the Justice and Development Party's internal feud, is whether President Erdogan will have absolute power in his party or whether detractors will be able to express respectful disagreement. 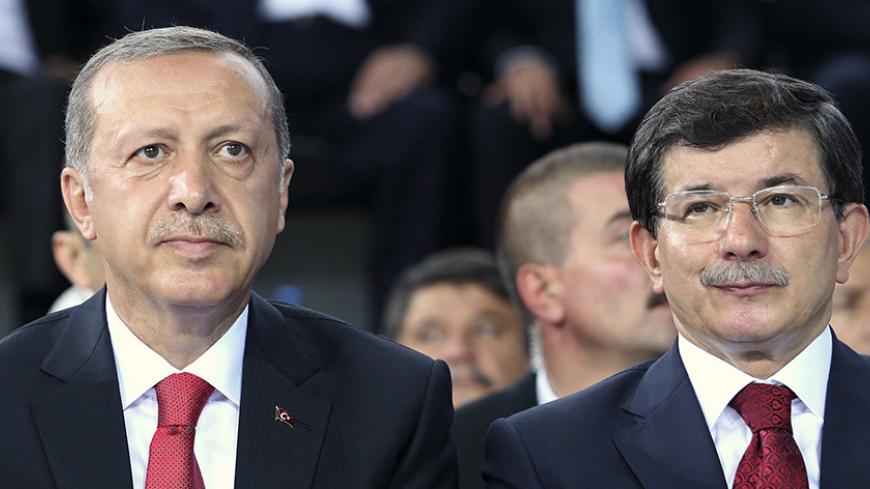 Turkey's Prime Minister Recep Tayyip Erdogan (L) and Foreign Minister Ahmet Davutoglu attend the Extraordinary Congress of the ruling Justice and Development Party to choose a new leader of the party, ahead of Erdogan's inauguration as president, in Ankara, Aug. 27, 2014. - REUTERS/Rasit Aydogan

It has been rumored in Ankara lately that tension is growing among Turkey’s ruling Justice and Development Party (AKP) elites, in particular between the “palace” of President Recep Tayyip Erdogan and the government led by Prime Minister Ahmet Davutoglu. In return, AKP spokesmen and propagandists reiterated that this false news was manufactured by opposition figures whose only aim was to create “fitna,” an Islamic term for internal strife that roughly corresponds to sedition. Yet, thanks to a series of stunning statements by Deputy Prime Minister Bulent Arinc, the fitna erupted in a way that nobody could deny.

The first such statement came on March 21, when Arinc criticized Erdogan’s outburst against the government-led “peace process” with Kurdish militants. “[Erdogan’s] statements that ‘I didn’t like it’ or ‘I don’t approve of this and that’ are his emotional remarks,” Arinc told journalists in a surprisingly defiant tone. “It’s the government that is running the country and the responsibility belongs to the government,” he said, sending to Erdogan a clear know-your-limits message.

These were not ordinary words, and Arinc is no ordinary politician. Back in 2001, he was one of the three founders of the AKP, with Erdogan and Abdullah Gul. Since Gul became president in 2007, Arinc has been regarded as the “second man” of the AKP. In the past three years, he has disputed Erdogan on various issues. During the June 2013 Gezi Park Protests, for example, Arinc opposed Erdogan’s hawkish defiance and tried to establish dialogue with the protesters. More recently, he admitted, “half of society hates us” and that the AKP itself is responsible for this. (In return, he got chided by a pro-Erdogan propagandist for “whining.”)

Arinc’s defiance of Erdogan came as a shock in a political setting where Erdogan is seen as the sole master of the AKP universe. Erdogan himself responded, saying, “I am no figurehead.” Some Erdogan devotees went further, blaming Arinc for “treachery.” But the most audacious response came from Ankara Mayor Melih Gokcek, who accused Arinc of the most nefarious treason: to be a pawn of the “parallel state,” i.e., the Gulen movement. When Arinc replied to Gokcek in front of cameras on March 23, he accused Gokcek not just of “indecency” but also massive corruption. The next day, an Ankara prosecutor opened an investigation into Gokcek for corruption, in addition to an investigation into Arinc for “concealing a crime,” apparently under the assumption that he knew of the corruption but did not report it until the polemic with Gokcek broke out.

There is no doubt that all this came as a blow to the AKP as the June 7 general elections near. (“The party is losing its charm,” warned a supportive journalist.) While personal animosities, such as those between Arinc and Gokcek, are probably at play as well, the controversy also exposed the divergence between Erdogan and the Davutoglu Cabinet. Though Erdogan is undoubtedly still the revered leader of the AKP, the Cabinet also wants to save itself from Erdogan’s “tutelage” and be able to stand on its own feet. In return, Erdogan, in the words of columnist Ali Bayramoglu, “[either] wants his instructions to be implemented precisely and reacts when this does not happen. Or he is concerned about some of the issues he has approved in accordance with the current picture. … He then tries to make fine adjustments to the situation. Or, with such outbursts, he reflexively points to chaos, trying to explain the necessity of a presidential system in Turkey. I think the current situation is a mixture of all.”

One curious matter is Erdogan’s recent statements on the peace process with Kurdish militants — the very issue on which Arinc warned Erdogan not to exceed his limits. This is strange, for Erdogan himself initiated this process some three years ago and has been quite proud of it. Just recently, however, he began to sound like Turkish nationalists, claiming, “There is no Kurdish question,” and accusing the government of making too many concessions for the Kurds.

A journalist who knows the AKP universe well spoke to Al-Monitor on condition of anonymity and said that Erdogan's statements are connected to his calculations about the upcoming elections: “What worries Erdogan is the vote the AKP will get in the election. The HDP [Kurdish People's Democracy Party] is raising its votes, as well as the MHP [Nationalist Action Party]. As a result, the AKP may still win the elections but fall quite short of the necessary number of seats to amend the constitution. In that case, Ahmet Davutoglu can still continue as prime minister, whereas Erdogan’s dreams of a super-presidency can evaporate.”

The underlying question, in other words, is whether Erdogan will have absolute power in an AKP that consists of nothing but his yes-men, or whether there may be officials who can respectfully disagree with him, such as Arinc and, less explicitly, Davutoglu and Ali Babacan, the other deputy prime minister. The constitution is certainly on the latter’s side, as it defines the government as the executive power. But it is Erdogan who has countless fans, devotees and conspiracy theorists who are eager condemn any intra-party critic as a “traitor.”