US begins talks on how to push IS out of Mosul

A US official tells Al-Monitor that more US military aid will flow to Iraq once it creates a new government that contains a “critical mass” from each of Iraq’s political parties. 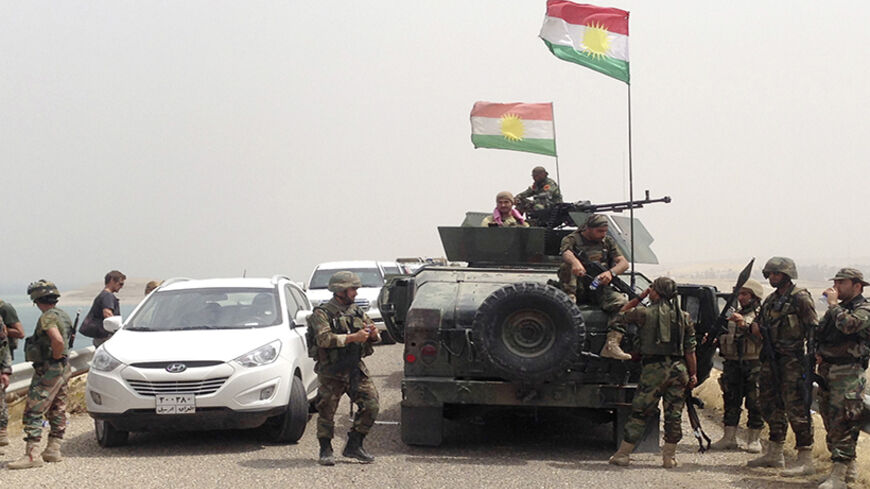 US officials have begun discussions with local leaders in Iraq’s Ninevah province about how to recapture the city of Mosul in the wake of the successful operation to recover control of Mosul Dam from the Islamic State (IS), a US official said.

In an interview Aug. 20 with Al-Monitor, the official, who spoke on condition of anonymity, predicted that recovering Iraq’s second largest city — which was seized by IS on June 10 — would “require local forces” and be a long-term project.

“We’re in touch with the governor of Ninevah and all the Iraqi leaders and a number of sheikhs from the area about how to begin to take territory away from ISIL,” the official said, using an alternate acronym for the extremist group.

The official spoke while the US Central Command announced 14 more US airstrikes “in the vicinity of Mosul Dam,” bringing the total of US airstrikes in Iraq to 84 since Aug. 8.

“The Department of Defense confirmed Aug. 18 that Iraqi forces have cleared and now hold Mosul Dam, and that Iraqi security forces and Kurdish defense forces are working together to further expand their control of the area,” Centcom said.

The capture of Mosul shocked Iraqis and the Barack Obama administration, which was disheartened to see the collapse of much of the US-trained Iraqi military and the loss of so many US weapons. Deputy Assistant Secretary of State Brett McGurk testified last month that five of 18 Iraqi army and federal police divisions fell apart in 48 hours in the face of the onslaught from IS, which he called “no longer a terrorist organization [but] a full-blown army.”

Since that rout, Iraqi forces have begun reorganizing under new leadership. The US official noted that the top two Iraqi army commanders had been replaced and said that the United States was now “comfortable with the upper reaches of the Iraqi military,” which included “people we worked very closely with” when the United States occupied Iraq from 2003 to 2011.

Of the 50,000 ordinary Iraqi soldiers who melted away after the Mosul debacle, about 10,000 have returned to their training sites, he added. Volunteers who answered the call of Iraq’s senior Shiite cleric, Ayatollah Ali al-Sistani, are being “organized in a more concerted fashion” than the rag-tag ranks in which they initially formed, the US official said.

He also noted the role of Iraqi special forces known as the Golden Force in retaking Mosul dam.

About 200 of the US-trained commandos “did most of the fighting and cleared a lot of IEDs [improvised explosive devices]” while the United States provided air support, he said. The United States planned the operation and coordinated the Iraqis with the Kurds’ peshmerga from a joint operating center in the Kurdish regional capital of Erbil. The US official called the operation “historically pretty significant” given past frictions between the Kurds and the Baghdad government.

Beyond pushing back IS from the dam and dealing with the humanitarian disaster in northern Iraq caused by the IS onslaught, the Obama administration is closely monitoring the formation of a new Iraqi government under Prime Minister-designate Haider al-Abadi.

The US official said that Sunni and Shiite politicians had met in Baghdad Aug. 18-19 and that Kurdish leaders had joined the talks about the formation of a new cabinet. Asked by Al-Monitor if the cabinet had to include a certain number of Sunnis and Kurds or have a Sunni defense minister to be considered sufficiently inclusive, the US official said there was no “particular test” but that the cabinet needs to include “a critical mass from each community in terms of endorsing a common national program to govern the state.”

Among the items that need to be in that program was a mechanism for settling disputes between the Kurds and the central government over sharing oil revenues and allowing the Kurds to export oil pumped in their territory, which has expanded to include Kirkuk, he said. He said talks aimed at brokering such a deal were “extremely close” to success in March-April but “didn’t quite get there” as politicians prepared for April parliamentary elections.

Asked if the United States was also working to pry Sunni tribes away from IS, the official said a repeat of the 2006-2007 “awakening” was not likely at this point, given the strength of IS and its brutal treatment of Sunnis who did not accept its vision of an Islamic caliphate. “Ordinary people don’t want to rise up and fight a group that’s going to kill them immediately,” he said. However, if IS “is degraded a bit, there’s a good chance of that happening because most of the Iraqis in the Sunni parts of Iraq do not want to live in the seventh century.”

The US official said about a dozen countries are contributing humanitarian assistance to deal with the hundreds of thousands of Iraqis displaced by the fighting in the north of the county. So far only Britain has been involved militarily, carrying out two air drops of humanitarian aid on Mount Sinjar, where members of the Yazidi minority were stranded.

Asked about possible coordination with Iran against IS, the US official suggested that there had not been direct contact but indicated that the United States was aware of Iranian activities. There have been numerous reports of visits to Iraq by Quds Force chief Qassem Suleimani, and Iranian national security adviser Ali Shamkhani — an ethnic Arab — is said to be involved in the discussions over forming a new cabinet.

The crisis in Iraq has also focused new attention on the spread of IS in Syria, prompting calls from some quarters for direct US military intervention there.

President Obama, reacting to confirmation that IS brutally executed an American hostage — freelance journalist James Foley — called for “a common effort to extract this cancer, so that it does not spread.”

The US official said, “the conversation in the region has ebbed and flowed between ‘You have to get [Syrian President Bashar al-] Assad as a precondition to dealing with this extremist problem, and this extremist problem is now such a threat that all of us need to deal with it urgently,” and worry about ousting Assad later.

The IS capture of al-Rutba has given the terrorist group “a direct shot to the Saudi border and the Jordanian border,” the official said, while the Iraqi-Syrian border at al-Qaim is “basically gone. … This is a tremendous threat to everybody, and it is really sharpening the minds.” Asked if the United States had directly discussed the IS threat with the Syrian regime, the US official said “not that I’m aware of.”