Iraqi volunteers ill-prepared to fight IS

Volunteer fighters are signing up en masse to join the "righteous jihad" against the Islamic State in the name of nationalism and economic opportunity. 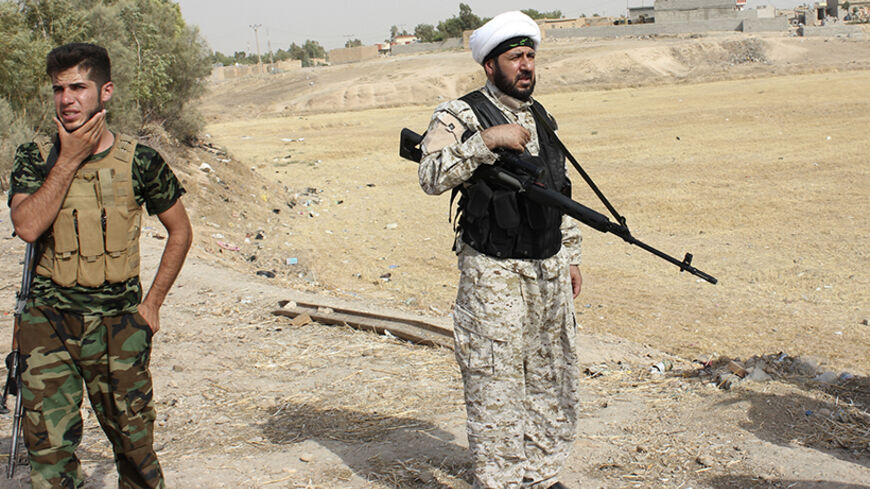 Armed tribal fighters take part in a mission to secure an area from militants of the Islamic State in the Hamrin mountains in Diyala province, July 25, 2014. - REUTERS

A popular mobilization is occurring in Iraq in response to the “righteous jihad” fatwa issued three days after the Islamic State (IS) occupied Mosul on July 10.

Saad Hamid is among the 200 individuals who volunteered to help the Iraqi army stop the IS advance. Enlisted in a one-month training program in al-Kafal village, south of Babylon, he was being trained to use weapons and in combat techniques before he was expected to join his peers on the battlefield.

Hamid enthusiastically relayed his impressions to Al-Monitor. He said that he was ready to fight IS and defend the country in response to the call to jihad. There are other reasons behind his haste to volunteer, however, including unemployment and difficult financial straits.

He told Al-Monitor, “I am reassured because I am receiving a fixed monthly salary to provide for my family, which includes my mother and three siblings.”

Like Said, the majority of volunteers are poor and trying to find a livelihood at any cost. Every volunteer receives a $400 monthly salary, which is raised to $600 once he enters the battlefield.

In a training camp in Babylon’s Hillah, in the former US Kaslo base, Hassan al-Jabbouri, 19, trained for a month and a half before joining the combat troops in mid-July in Jurf al-Sakhar, north of Babylon. The area is the site of attack-and-retreat battles between the army, security forces and volunteers on one side and armed groups on the other.

Despite Jabbouri’s enthusiasm and his belief that fighting IS is a national duty, he told Al-Monitor, “The majority of volunteers did not receive proper training and lack combat expertise. In addition to this, the majority of them are young and poor, and they see in volunteering a chance to secure an income.”

Saad Hassoun, an Iraqi army officer, told Al-Monitor, “The majority of volunteers need quality training and enough time to master the use of weapons and martial arts.” He added, “National enthusiasm can be reckless, and can lead to human losses if not coupled with proper training.”

Hassoun said, “There are thousands of Iraqis who have combat experience from their involvement in the wars that Iraq fought in the 1980s and during the Iraqi invasion of Kuwait, and even though these more experienced Iraqis are older, [the army] can benefit from their expertise and training.”

In the 1980s, the former Iraqi regime formed the Iraqi Popular Army to bolster the state army in its war against Iran. This pattern is repeating itself today under different circumstances and for different purposes.

Hassoun believes, however, that at that time, “The Popular Army was more organized and powerful than the current groups of volunteers. It relied on older-age groups in comparison to now.”

Qais Hamza from Babylon is one example of the fighters trained in the volunteering centers. He was sent to the battles in al-Taji in Baghdad to fend off the attacks of armed groups, during which three of his fellow volunteers died.

Hamza told Al-Monitor that he had no livelihood other than what he earned from volunteering. He noted, “A large number of young men who were transferred to the battlefields got killed due to the enthusiasm that was not combined with expertise and proper training.”

An Iraqi officer tasked with training the volunteers in the Babylon center who spoke on condition of anonymity said, “There are large quantities but no quality. The operation needs to be able to choose quality fighters who can fend off terrorism with the least human and material losses possible.”