Russia views the expansion of the Islamic State in Iraq as a threat to its own security, especially given the potential return home of Russian-born jihadists. 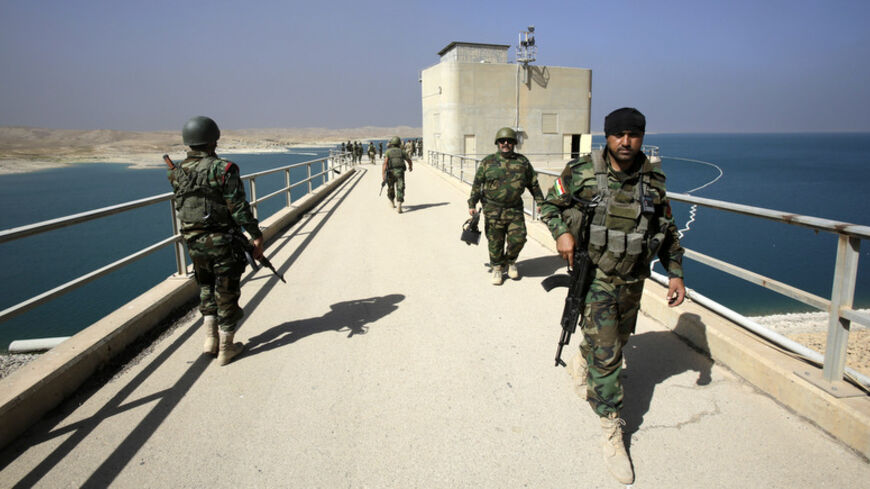 It seems that Moscow has yet to take a position on the rapidly changing situation in Iraq, including the US airstrikes against the Islamic State (IS), a movement that is regarded as a serious threat to Russia’s security. Russian analysts have carefully considered the assessment of IS made by US Secretary of Defense Chuck Hagel on Aug. 21 that IS is "as sophisticated and well-funded as any organization we’ve seen." When answering questions, however, Hagel further elaborated: "This is beyond anything we’ve seen."

The experienced Hagel has every reason to think so, as no one actually doubts the potential of IS. It is true, though, that there are other opinions. David Goldman at the Middle East Forum believes that "[IS] by itself is overrated." The Achilles’ heel of the IS militants/killers is the fact that they lack any kind of aircraft whatsoever, meaning that — in a territory with virtually no place to hide — they can neither win the war nor cause appreciable damage to an enemy in a position of complete air supremacy. Goldman mentions that the IS fighters "occupy terrain where aerial reconnaissance can identify every stray cat. The Saudi and Jordanian air forces are quite capable of defending their borders. Saudi Arabia has over 300 F-15s and 72 Typhoons, and more than 80 Apache attack helicopters. Jordan has 60 F-16s, as well as 25 Cobra attack helicopters."

IS militants, however, are no fools. According to our sources in Erbil, IS has already started to hunt for airplanes, helicopters and drones, while trying to seize airfields in Iraq and Syria. In addition, they have announced the creation of a squadron of pilots, engineers and technicians from those Sunni-Arab ex-servicemen who defected from the Iraqi air force, and are even looking for possible recruits in Europe. What if they will be able to create their own air force? And even their own air defenses?

The Islamic State's strengths are the presence in its ranks of experienced commanders from the former Iraqi army under Saddam Hussein, as well as the support of the "Arab street," especially in those Gulf states where the Salafist ideology is strong. In Turkey, tourists can easily buy T-shirts with the IS logo.

I may have missed something, but I have yet to hear strong condemnation of the actions of the IS butchers (who, moreover, burn Palestinian flags) from the most authoritative Sunni centers of the Islamic world, with the exception of Al-Azhar. Nor have I witnessed mass demonstrations in the streets and squares of Arab countries — as happened during the recent events of the Arab Spring — with slogans condemning IS. I must have missed them, too.

I, like many other Russian analysts, believe that one of the root causes of the success of the jihadists in Iraq is the collapse of the state, brought about by a foreign invasion that could not achieve the goals it officially set. Yet in Russia there are still experts who believe in the myth of the omnipotence and sophistication of Washington’s foreign policy strategy, by dint of which the latter would allegedly be able to manipulate decision-making even in Moscow. For example, Semyon Bagdasarov writes about the "US base" in Ulyanovsk as "a big trick, organized by the Americans, who relied on the lack of professionalism of our foreign policy bureaucrats." It is not clear which bureaucrats the author has in mind; the high professionalism of Russian diplomats and Middle East experts is recognized also abroad, and in Russia, decisions on important foreign policy issues, such as this one, are generally taken by only one well-known person, who cannot certainly be referred to as "a foreign policy bureaucrat."

It is not surprising that this expert proposes that Moscow solve the agonizing problem of the possible return home of fighters (who are battling in Syria, Iraq and Afghanistan, including as part of IS) by introducing a "severe" (does he mean using torture?) visa regime "with the countries of Central Asia and with Turkey as transit points for terrorists." As if this would prevent those Russian citizens — with plenty of practice in cutting off the heads of "apostates" in Iraq and Syria — from coming back home at any time of their choosing. I won’t talk about the sad fate that would befall the project for a Eurasian Union long nurtured by President Vladimir Putin, were this expert’s proposals to be implemented. I can also imagine how "grateful" to Bagdasarov the millions of Russian citizens, who are accustomed to going on vacation as they please to the cozy and carefree Turkish beaches, would be.

Russian jihadists need no training in brutality. IS militants learned the slow and painful public beheading of their foes from the example of their like-minded supporters from the North Caucasus. British journalist Robert Fisk recalls in an Aug. 20 article for The Independent how he "was once offered a videotape in Fallujah of a man having his throat cut by hooded men." Only later did he realize that "the victim was almost certainly a Russian soldier and his murderers were Chechens." The video had been brought to Fallujah "so that the future butchers of the resistance could learn from it."

In Russia, people actually believe — not without reason — that safe havens and hotbeds of indoctrination for jihadists, including those from the North Caucasus, have been set up in Western countries. Their victims have already been civilians in the United States (in the 2013 terrorist attack on the Boston Marathon). And a sizable portion of the foreign terrorists who are fighting in Syria, especially the most battle-hardened and brutal, are Chechen jihadists. They didn’t come to Syria from Russia (where, after two wars in Chechnya, the situation has been stabilized through reconciliation), but from Georgia, Turkey and European countries that once provided them refuge as freedom fighters.

According to Guido Steinberg of the German Institute for International and Security Affairs (SWP), Chechen jihadist fighters in Syria "represent a domestic security problem in Europe and Turkey" because many of them come from the diaspora, namely Georgia, Turkey and "dozens from Austria and France and rather fewer from Belgium, Scandinavia and Germany." It is well known that IS "in Iraq and Syria may include between 1,000 and 2,000 Chechen fighters," as cited in an Al-Monitor piece by Paul J. Saunders.

The Aug. 16 murder of Rasul Gamzatov, deputy to the mufti of North Ossetia Hadji Murad Gatsalov, was clearly committed by homegrown jihadists. It has to be added that Gatsalov himself has thus far been the only Russian mufti brave enough to issue a fatwa prohibiting Russian Muslims from going to fight jihad in Syria.

Until recently, Turkey did not show concern about the threat emanating from IS. Perhaps offering jihadists on their way to fight in Syria the possibility of transiting through Turkish territory was seen as a kind of appeasement that could insure Turkey against IS, which does not harbor any sympathy for Ankara. Turkish authorities have even refused, and are apparently still refusing, to include IS in the list of terrorist organizations. However, the kidnapping of the Turkish consul in Mosul along with his family and escort, after the fall of the city to IS, has seriously damaged the Turkish authorities’ self-regard. I do not rule out that this may lead to a review by Turkey of its relationship with the jihadists. After all, the IS killers eliminate not only the Shiite and peoples of other faiths, but also those Sunnis who refuse to follow them. According to Ali Mamouri, in Syria’s Deir ez-Zor alone they have killed 700 civilians from a Sunni tribe in the past two weeks.

Indeed, the war with the IS killers threatens to drag on, with no possibility of destroying them by airstrikes alone. In the famous book by Czech satirist Jaroslav Hasek, the good soldier Schweik responds to a question about how long World War I will last, saying: "15 years." When asked why, he replies, "After the Thirty Years’ War, we’ve become twice as smart, so it must be 15 years." Were the current wars to last longer than the previous ones, would this mean that we have become more stupid? And how much longer do we still have to fight?