After President Abdel Fattah al-Sisi's visit to Russia, Russian and Egyptian trade and security cooperation are stronger than ever. 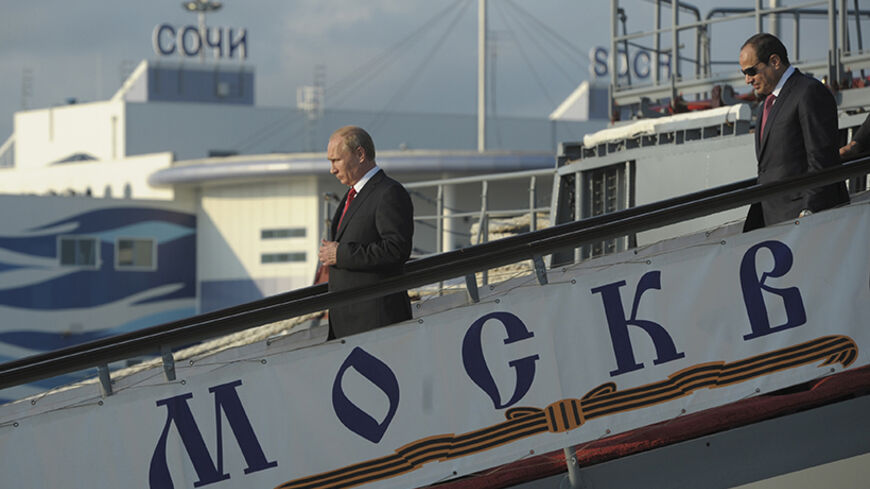 The official visit of Egyptian President Abdel Fattah al-Sisi to Russia — his first overseas trip outside the Arab world since his election — and the outcome of his talks with President Vladimir Putin have clearly demonstrated the close links among the seemingly disparate crises afflicting the Middle Eastern states, Ukraine and their impact on relations between Russia and the West.

As a result of the visit, the planned cooperation in the field of agriculture will help Russia overcome the possible negative effects of the embargo on its agricultural products imposed by Europe and the United States, as well as allowing Egypt to tackle the most difficult development challenges it faces. It has been revealed that, in the near future, Egypt is ready to increase its supply of agricultural products to Russia by a further 30% (in addition to the 30% increase already seen this year), which now accounts for 90% of Russian imports from that country. Meanwhile, Russia, which this year will reap a record grain harvest of about 100 million tons, will remain the largest supplier for Egypt, providing about 40% of the country's grain consumption. The volume of foreign trade, currently at approximately $3 billion, should double.

It did not go unnoticed by analysts that the Russian leadership is prepared to provide simplified and, in essence, preferential treatment for Egyptian goods entering the Russian market. The talks included discussion of the possible creation of an Egyptian logistics center on the Black Sea coast of Russia, though it is not yet clear exactly where such a center would actually be established. According to Russian Minister of Agriculture Nikolai Fyodorov, a rapid increase in the supply of a number of agricultural products from Egypt could help cover 40-50% of the deficit in those goods that could result from the embargo against Moscow.

In this context, no less important is the possibility of including Egypt in trade and integration arrangements between Russia and its closest allies. Putin declared at the conclusion of negotiations on Aug. 12, “We reached an important agreement on establishing cooperation between Egypt and the Customs Union of Russia, Belarus and Kazakhstan. We are now studying the possibility of establishing a free trade zone.” According to some estimates, the issue is likely to be resolved in the near future.

Two aspects of the agreements reached are strategic: First, the expansion of military-technological cooperation, though the details of the new deal have yet to be disclosed; and second, the establishment of a Russian industrial zone in Egypt, which would be part of an ambitious project to create a new Suez Canal. Even a mere few weeks ago, no one could have imagined the possibility of Russian investments in such projects in Egypt.

After the discussions on international and, more significantly, regional issues, careful assessment of the two sides' positions revealed that in many ways, they coincide. In relation to the events in Gaza, the leaders of the two states unanimously called for an end to violence. It is still unclear whether behind this stands any concrete agreement that could lead to joint diplomatic actions.

Analysts have noted that there are rather serious differences in the Egyptian and Russian positions regarding Gaza. First of all, unlike Egypt — and the United States, the European Union and Israel — Moscow still does not consider Hamas a terrorist organization. It appears that the Kremlin does not intend to burn bridges with Hamas, and this neutrality allows it to preserve a great degree of potential for broad mediation. As Hamas retains control of Gaza, consequently Israel will have to engage in negotiations with the movement, directly or indirectly. Moreover, in the West Bank, support for Hamas has only grown after the terrible bloodshed and destruction in Gaza.

Second, Moscow has always opposed the blockade of the Gaza Strip in which Egypt participates along with Israel. As for Egypt, as Amr Adly points out in an op-ed in Al-Hayat, in the past two years due to the deteriorating security situation, "The Egyptian army kicked off a strategy of systematically targeting tunnels with the aim of destroying them and stopping informal movement between Gaza and north Sinai." Instead, under former President Hosni Mubarak’s rule — and even more so under former President Mohammed Morsi’s — the tunnels were left untouched.

Another factor must be taken into account. At the very beginning of the military confrontation in Gaza, the establishment in Moscow avoided unilaterally condemning any of the parties for the violence and, while calling for peace, considered both the shelling of Israeli territory by Hamas militants and the retaliatory Israeli strikes on Gaza unacceptable. This position, which was taken while bearing in mind — among other factors — the already ongoing convergence with Egypt, then found support among the Russian public. However, as the victims of Israeli violence grew to number hundreds of civilians in Gaza, Russian public opinion clearly began to shift toward an unconditional condemnation of Israel. In this regard, I will cite for comparison the results of a recent public opinion poll in the United Kingdom. Even there, "52% of voters believe Israel acted disproportionately when it responded to the firing of rockets by Hamas by launching airstrikes against the Gaza Strip," while only "19% thought Israel had acted proportionately."

Despite the lack of similar surveys in Russia, but given the anti-Israel sentiment among the country’s 20 million-strong Muslim population, traditional Russian sympathy for the Palestinians, as well as the comparison that many Russians appear to be drawing between Israel's operations and what they consider Kiev’s punitive actions in eastern Ukraine, we can assume that such a figure in Russia would have been much higher than in the United Kingdom. Observation of Russian social networks supports this assumption.

It can also be inferred that, during the negotiations, the positions of the parties on Syria and Iraq were not identical. Yet one thing is certain: Both Russia and Egypt are equally interested in the defeat of the terrorist-jihadists of the Islamic State (IS), though, when determining its policies, Cairo must take into account the position of its major donor and ally in the relentless fight against the Muslim Brotherhood, Saudi Arabia. Actually, a popular conspiracy theory among the Russian political expert community contends that the Saudi kingdom was involved in the creation of IS. In a still unpublished paper given to me by author Stanislav Ivanov, he writes: "The creators and sponsors of [IS] (Saudi Arabia, Qatar and Turkey) have not given up on their plans and views about such militant jihadists as a vanguard of radical Sunni groups in the region. And even Washington would prefer to just push [IS] into the neighboring theater of operations (Syria) for a more active fight against the regime of [President] Bashar al-Assad."

Whether this is true or not, as a well-informed senior Saudi source told Al-Monitor on the condition of anonymity, IS enjoys a great level of sympathy among the kingdom’s population. Support for the group is so great that the authorities allegedly fear that, in case of armed clashes between units of the Saudi army and IS, some troops may switch to the latter's side.

It suits both Moscow and Cairo that the United States is striking their common enemy, namely the jihadists in northern Iraq, though it is likely impossible to eradicate this evil simply by bombing. However, given the dramatic loss of mutual trust in Russian-US relations, few in Russia believe in the altruistic motives of the US administration, tending instead to explain its decision to bomb with geopolitical interests related, primarily, to the oil wealth of northern Iraq. As Robert Fisk wrote on Aug. 10, oil production in Iraqi Kurdistan will reach 250,000 barrels a day "next year — providing the boys from the caliphate are kept at bay, of course — which means, according to Reuters, that if Iraqi Kurdistan were a real country and not just a bit of Iraq, it would be among the top 10 oil-rich countries in the world. Which is surely worth defending. But has anyone mentioned this?"

Russia, of course, firmly supports the preservation of Iraq’s unity. Nevertheless, there is something that really unites the Russians and the Kurds. The latter like to say that the Kurds have no friends but the mountains. The Russians have no friends, either — except for their army and navy.