Iran's president has announced plans to open a new guild for journalists, sidestepping the issue of the closure of the previous professional association. 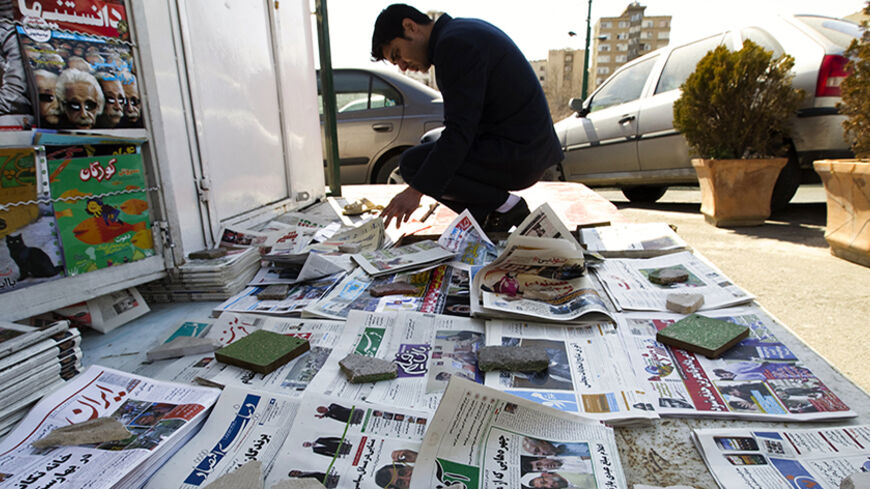 Iranian President Hassan Rouhani spoke in anticipation of Journalists Day, to be held Aug. 8 in Iran, saying that steps have been taken to create an alternative journalists guild, a proposal that falls short of satisfying the demand of most Iranian journalists: the reopening of the original journalists guild, defunct due to legal troubles.

“The administration will produce a bill to consider for an association related to journalists so that this association can be active for the work of journalists. If there is an infringement, this guild and professional association can state its position on that infringement,” Rouhani said at an Aug. 7 press conference. He added that the bill would be made public so that experts can weigh in before it is presented to parliament.

Iranian journalists have long hoped for the Association of Iranian Journalists (AIJ) to be reopened. It was created when former President Mohammad Khatami took office in 1997, but suffered numerous legal troubles. In August 2009, two months after the contested presidential elections, its doors were shut on the order of Tehran prosecutor Saeed Mortazavi. The association was later reopened but closed once again.

Rouhani avoided the issue in his latest statement by introducing another guild to address the needs of working journalists.

In a 2012 video, journalist Massoud Bastani addressed the importance of a guild before returning to prison to serve the rest of his six-year prison sentence. “We journalists are in a situation in which we have to address each other's cries … especially since there is no guild, no institution, no group to solve the problems of journalists or those in prison,” he said. “Someone who becomes a journalist accepts this. They have read and seen journalists who become active and are in and out of prison. But if one can have assurance or the support of their guild, this is very good.”

Bastani said that when a filmmaker has trouble, the filmmakers guild raises public awareness and decreases the pressure on them. He said that journalists have no such recourse.

The president's message was very tame in comparison to his other speeches. He did not address or even make indirect references to the fate of imprisoned journalists such as Washington Post reporter Jason Rezaian or the dozens of other Iranian journalists currently in jail.

Rouhani also introduced a bylaw written by his administration. “The bylaws of implementing the law for transparency of information, which can help the professional work of journalists, after many years has been produced by the administration,” he said. “This bylaw will soon be operational, and this will be helpful from a professional viewpoint for the media and everyone.” Just like the plan for the alternative guild, few details were offered, and this legislation in particular seems highly unlikely to be put into effect.

Rouhani also said that plans for ensuring the welfare of journalists, such as unemployment insurance and free journalism classes, will be presented as gifts for journalists in honor of Journalists Day.