As the Rouhani administration moves to change media laws, it faces a wave of accusations that it seeks to end independent journalism. 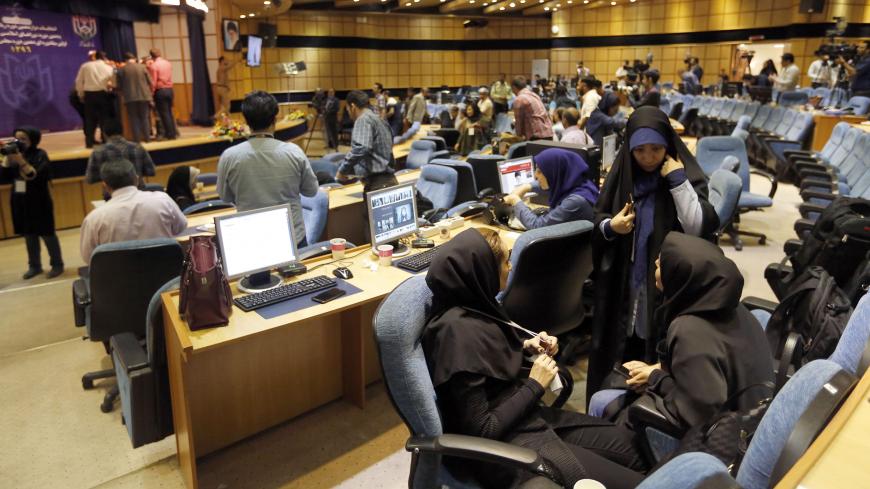 “Working as a professional journalist is subject to obtaining a journalist’s license from the Media Governance Organization [MGO] of the Islamic Republic of Iran.” This sentence is part of Article 52 of the [MGO] Bill, which is currently being reviewed by the administration’s Cultural Commission. The bill, which has six chapters and 66 articles, was introduced and drafted in October 2013 by the press deputy of the Ministry of Culture and Islamic Guidance, which works under the administration of President Hassan Rouhani.

On Oct. 25, the administration’s official website reported that certain parts of the bill had been reviewed and approved at a meeting of its members, headed by Rouhani himself. Six days later, the full text of the bill was published on the same website. Much criticism followed as many Iranian journalists lamented that the passage of the measure will result in the “death of independent journalism” in Iran. On Nov. 6, ILNA reported that according to a poll of 160 journalists conducted through its website, 81% opposed the bill.

These criticisms finally resulted in the government backing off. On Nov. 5, Seyyed Abbas Salehi, the minister of culture and Islamic guidance, tweeted, “The Media Governance Bill has been returned to the Cultural Commission of the administration for review of certain articles.” On Nov. 8, in an interview with the ISNA news agency, he also declared that the reason for the return of the bill to the commission is the criticism it received due to its top-down nature and tone, promising, “In subsequent reviews and steps, this approach will certainly be toned down.”

An independent journalist living in Iran and identifying herself only as Mina talked to Al-Monitor regarding this issue. She said, “We can say that in all aspects, the [MGO] currently has all the power and can allow or deny journalists the possibility of doing their jobs. Any journalist who has not obtained a license from this organization will not be allowed to even cover regular news. This is one of many problems with this bill. This bill reminds me of what we have heard about the conditions surrounding the political factions, journalist committees and writers under the Stalin regime in the Soviet Union.” Mina, who only spoke on condition of anonymity due to limitations that are imposed inside Iran, said that after working for a couple of years for various publications, she is now trying to continue her work as a journalist independently.

She believes that the bill will result in more censorship and further elimination of independent journalism from the mainstream of Iranian media. She said, “Conditions concerning journalists and media outlets in Iran are problematic enough as it is, and there is no job security. Media chiefs are either government appointees who are naturally in line with the government’s actions or are private owners who are willing to cooperate with the government in order to increase their own revenues and receive more advertisements.”

Mina points to issues mentioned in the text of the bill, saying, “Almost all sections of this bill are being criticized because they represent purely an official view of the press, which is unacceptable.”

Media outlets have reacted to the bill by publishing articles, editorials, interviews and editorial cartoons. For example, Kambiz Norouzi, a journalist and lawyer, wrote in an editorial for the Reformist Shargh daily, “This bill has at least 47 basic media and legal problems. … These problems are indicative of the fact that this bill is widely dismissive of the basic rules of media and press, such as having a free press, security for media and independent journalism.”

Hossein Entezami, the deputy minister of culture and Islamic guidance in charge of media affairs, was the first person to announce back in 2013 that the Rouhani administration was trying to put together a media guild. Since 2004, as a representative of the managing directors of Iranian publication houses, Entezami has been a member of the Press Supervisory Board that was formed in 2000 under the provisions of the press law and is headed by the minister of culture and Islamic guidance himself. On Nov. 3, in response to the wave of criticisms, Entezami wrote an editorial that was published on the administration’s website. It read: “An administration whose goal is to promote the freedom of speech and particularly the freedom of the press — and which believes that media, next to food and arms, is the third pillar of national security — will, logically, not violate its own goals and will not pass bills that damage the very thing that functions as an impetus for national progress.”

Every year, Reporters Without Borders publishes an annual ranking of press freedom around the world. This year, Iran was ranked 165 among 180 countries in the world. This was an improvement by four points compared to the previous year. Yet, the organization noted, “this better ranking for Iran does not mean that the country has experienced any serious improvement when it comes to press freedom. Instead, it is the result of other countries degenerating. Iran has continued to be one of the world’s five biggest prisons for media activists.”

In its third chapter, the MGO bill clarifies the process of membership in the organization and the rights that come with it. According to articles 61 and 62 of the bill, only journalists who are members of this organization have the right to look for stories, carry media equipment, participate in press conferences and receive equipment and financial support from the Ministry of Culture and Islamic Guidance. Additionally, only licensed journalists are entitled to a jury of their peers and a public hearing.

Mina believes that if this bill passes, even the limited amount of press freedom that currently exists in Iran will be taken away. She said, “These past few years, as journalists were being arrested and imprisoned, there never was any committee responsible for following up on these arrests. If this bill is passed, the situation will become a hundred times worse. All independent voices will be shut down.”

The promise of reopening the Press Association, a campaign pledge of Rouhani during his 2013 campaign, is yet to be realized. During the aftermath of the disputed 2009 presidential election, on Aug. 3 that year, the association’s office was shut down by the orders of then-Tehran prosecutor general Saeed Mortazavi.

Mina says that considering the current situation, Rouhani’s administration does not have a strong will to reopen the media guild. “Numerous times during the past 40 years, we were told that the press situation would improve, but the establishment always wanted more power in censoring and limiting the freedom of information. I think that Hassan Rouhani will end his second term as president without delivering on the promises that he has made,” Mina added.