While Reporters Without Borders' World Press Freedom Index continues to give Iran a dismal rating, and Iran’s press is nowhere close to free, many journalists believe that conditions have improved somewhat under President Hassan Rouhani. 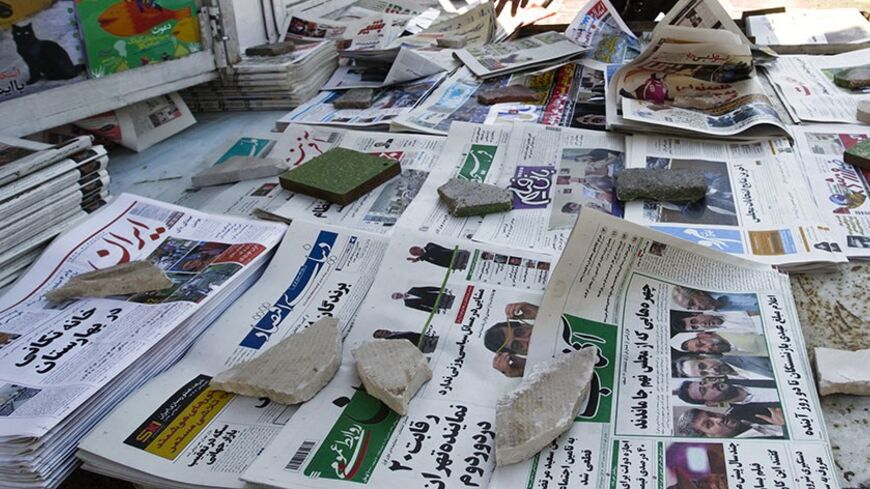 A man looks at newspapers at a newsstand in Tehran, March 4, 2012. - REUTERS/Raheb Homavandi

TEHRAN, Iran — In the 2014 Reporters Without Borders’ World Press Freedom Index, Iran ranked one place higher compared to 2013. Apparently, this change comes not as a result of any actual improvements but because one country was added to the list since last year. On the whole, 180 countries were assessed.

Vietnam, China, Somalia, Syria, Turkmenistan, North Korea and Eritrea were the seven countries that prevented Iran from being placed in the bottom of the chart.

Reporters Without Borders has traditionally used these criteria for assessing the freedom of press in each country: pluralism, media independence, environment and self-censorship, clarity and infrastructure.

This year, violence against journalists, including imprisonment and murder, was added to the list. Therefore, when a government keeps journalists in jail for long periods of time, it will receive a worse ranking.

At the end of 2013, with 50 imprisoned journalists and bloggers, Iran was the fifth-biggest prison in the world when it came to journalism. Although some of the political prisoners were freed, most of the promises made by newly appointed President Hassan Rouhani about freedom of speech, communication and release of political prisoners have remained unfulfilled. There is still pressure from security organizations on Iranian journalists stationed outside Iran who work for international media outlets and whose families live in Iran.

However, the editor-in-chief of one of the reformist newspapers in Tehran said that Iran’s ranking doesn’t accurately reflect the changes in the media under Rouhani.

“The truth is that the atmosphere has changed significantly since last year,” the editor told Al-Monitor on condition of anonymity. “There is pressure and there is self-censorship. However, the atmosphere has notably changed. Even mentioning the names of Mehdi Karroubi or Mir-Hossein Mousavi used to be a crime. But this past summer and fall, several newspapers mentioned their names in their headlines,” he added.

He continued, “Is it fair to say that our situation is worse than Saudi Arabia or Afghanistan or Iraq? Just recently, the headquarter of an Iraqi newspaper was bombed only because it had published cartoons depicting Iran’s Supreme Leader [Ayatollah Ali Khamenei]. And is there any real journalism in Saudi Arabia? Do they have an independent journalist who criticizes the royal family?”

A journalist working for one of the intellectual publications in Iran, who spoke to Al-Monitor on the condition of anonymity, also believes that the situation has improved. He said, “Rouhani’s presidency has lifted the spirits. People have regained some of their boldness and confidence but in reality, there have not been any significant changes.”

However, this neither means there has been complete freedom nor a backlash by conservatives.

The newspaper Kayhan, which is managed by Khamenei’s representative Hossein Shariatmadari, had recently asked the judiciary officials to limit the reformist newspapers. In an anonymous report, Kayhan had written: “Activities of the fugitive journalists and writers, who live abroad and have monarchist tendencies, have increased in the past several months in publications such as Andishe-ye-Pooya, Mehrnameh, Tajrobeh, Bokhara, Nasim-e-Bidari, Aseman, Asiya … this is while the Press Supervisory Board and the Ministry of Culture are keeping a destructive and questionable silence regarding this issue.”

Referring to Khamenei’s warning back in spring 2000 when he referred to some publications as the “enemy’s nest,” Kayhan had asked the attorney-general to stop these reformist publications: “Given the clear text of the Press Law, it is necessary for the attorney-general to perform his legal duties in face of such sickening trends and prevent the resurrection of the 'enemy’s nest' inside the country by charging these publications.”

In April 2000, following Khamenei's famous speech, in which he attacked publications critical of the establishment, Saeed Murtazavi who was the judge in charge of “media crimes” ordered the closure of tens of newspapers in the course of a single day. The day is referred to by independent journalists as “fall of the press.”

Perhaps one of the reasons why Iran has kept its previous ranking in spite of the somewhat open atmosphere of recent months is the fact that a large number of young reformist journalists were arrested overnight in January 2013. About 20 members of the editorial boards of the newspapers Etemaad, Shargh, Mehrnameh and Bahar were arrested last winter. They were accused of collaborating with foreign countries and were released one month later.

While that was under former President Mahmoud Ahmadinejad, there have also been setbacks under Rouhani.

In fall 2013, the two newspapers Neshat and Ham-Mihan, with two of the most famous journalists in Iran — Mashallah Shamsolvaezin and Mohammad Ghouchani — as their editors-in-chief, failed to obtain the necessary license to publish their newspapers for unknown reasons and in spite of all their legal affairs having been settled, having even hired staff and having prepared material for publication.

In summer 2013, Bahar was shut down by the Press Supervisory Board for publishing an article insulting the Islamic Guardianship (Velayat).

One of the literary critics of a monthly periodical told Al-Monitor, “The general atmosphere of the press has improved. Journalists write boldly and criticize different social, political and cultural issues. However, the situation is not ideal. Changes have been slow in coming, and only those who are active in this field can sense and understand these changes. They know that they can discuss issues more freely now.” She added, “But for those who are looking at the situation from outside, who use certain criteria by which they judge the situation, nothing has changed. Everything is in the same sorry state. This is why Iran’s ranking has not changed.”

On Feb. 14, finally after much struggle, Mohammad Ghouchani succeeded in obtaining the necessary license for publishing Aseman in place of Ham-Mihan. Two days later, one of the members of Aseman’s editorial board wrote in an article: “This is a good sign for us, and we can now work comfortably in a professional manner. Just as Mr. Ghouchani wrote in his editorial, Aseman is looking for moderation. It does not want to pick a fight with the establishment.”

However, Aseman was shut down, after publishing only six issues, for publishing an article on Feb. 18 criticizing the Islamic punishment (qisas).

Since Feb. 19, conservative websites such as Raja News and Fars News have been attacking Aseman for its criticism of qisas and have demanded its closure.

One of the editors of the newspaper Arman told Al-Monitor, “It is ridiculous that Aseman has been shut down, but I still believe that things are better now than they were before. Prior to this, no newspapers could obtain the publishing license so it could be shut down later. Compared to last year, we are one step ahead.”

Nonetheless, it's unclear what 2014 will bring for the media in Iran. Rouhani’s presidency has brought about a decrease in the amount of self-censorship in the media. However, this very fact has resulted in more conflict between the journalists and the fundamentalist and anti-democratic organizations in Iran. It might add to the antagonism and political hysteria inside the country.