Reformist Newspaper in Iran Shut Down Over Imam Ali Article

While the first newspaper under President Rouhani's tenure has been shut down for covering a sensitive religious topic, there are signs that the days of mass newspaper closures have not returned. 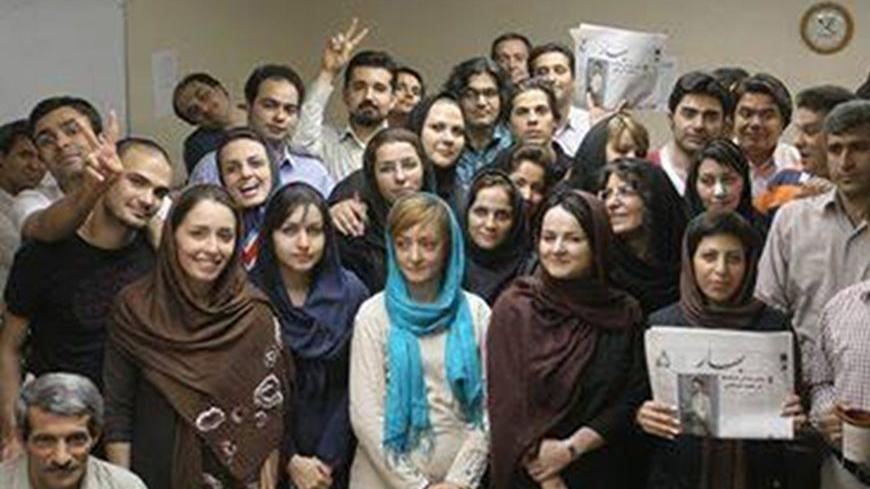 The staff of Bahar newspaper poses with a copy of their paper after it was banned, in Tehran, Oct. 30, 2013. - Twitter/@pedestrian

TEHRAN — On Monday, Oct. 28, Iran's Press Supervisory Board banned the reformist newspaper Bahar after it published a controversial article on Imam Ali. Alaedin Zohourian, chairman of the paper's board, told the Mehr news agency on Oct. 28 that the case has been referred to the courts. The government of President Hassan Rouhani has thus far gone along with the decision, which was not necessarily seen as part of a broader media crackdown.

Bahar published the article that sealed its fate on Oct. 28. In “Imam Ali, a Political Leader or a Religious Model?” the writer, Ali Asghar Gharavi, claimed that the religious role of the first Shiite imam was more important than his political role. He wrote, “He [Ali] is not just the political ruler for a few days of passing power in this world. Ali, more than being the commander of the faithful, is the imam and the role model for humanity.”

The article appeared one day before the Eid al-Ghadeer in Iran, an event and major point of contestation between the Shiites of Iran and the Sunni Muslims of the Arab world. Shiite Muslims believe that on this day, Muhammad, the prophet of Islam, appointed Ali as his successor. Historically, however, the first three caliphs ruled before Ali. For Sunnis, Ali is simply the fourth caliph, but Shiites consider him to be the first (of twelve) imams.

A scholar of religion, who spoke to Al-Monitor on condition of anonymity, asserted, “Look, this article has crossed two red lines. One is that its author is a well-known member of the Freedom Movement of Iran [Nehzat-e Azadi-e Iran],” the opposition party that has been banned from political activities for more than two decades. During the past three decades, especially after the unrest following the 2009 presidential elections, a number of party members, including its leader and other prominent figures, were arrested. “The second problem,” the scholar continued, “is the content of the article.”

“The establishment in Iran is stressing the point that the velayat-e faqih [guardianship of the jurist] is in fact the continuation of the rulership [velayat] of Imam Ali. Knowing this fact, Gharavi still emphasized the point that Imam Ali was more of a spiritual leader than a political one. In other words, he has questioned the position of Ayatollah [Ali] Khamenei as the political leader.” In one part of the article Gharavi wrote, “Imam Ali repeatedly mentions in Nahj al-BalaghaI [a book of quotations and sermons attributed to him] that political rule can only be achieved by people voting and paying allegiance.”

Imposing a ban on Bahar, a strong supporter of the reformists during election campaigns, has angered some journalists belonging to the reformist faction. Many of them have asked Rouhani, via social networks, to block any return to the practice of closing newspapers.

A journalist working for the reformist Etemaad, who also asked to remain anonymous, observed, “They are starting to put pressure on the press. Conservatives are clearly showing that they could only tolerate this situation for three months. This is exactly what happened in 1997 when reformist President Mohammad Khatami took office. I am surprised at Rouhani’s silence. If he starts his retreat this early, the conservatives will become bolder and bolder. He needs to learn a lesson from what happened during Khatami’s term.”

The first newspaper shuttered under Khatami’s presidency was Jame’e. It began publishing in February 1998 and was closed in June that same year. During the spring of 2000, numerous reformist publications were simultaneously banned by order of Ayatollah Khamenei.

Unfortunately for reformist journalists, Rouhani’s administration has not criticized the decision of the Press Supervisory Board, and, in fact, Minister of Culture and Islamic Guidance Ali Jannati has called it a “legitimate move.” According to the Islamic Republic News Agency, during an interview on Oct. 28, Jannati said, “This article is falsifying the Islamic history, and it has also played a role in creating religious conflict in the country.”

A journalist who had previously interviewed Jannati told Al-Monitor, “He [Jannati] is, after all, the son of a cleric. He also retreats quite quickly. This is exactly what I expected of him. I have heard his answers to the questions I have asked him privately and I have seen how those answers change as soon as he is in an official situation.” He claimed, “He obviously wants to keep his job.”

The editorial board of Bahar, which has been repeatedly closed down during the past few years, has worked hard at damage control. It immediately apologized and announced that the article's publication had been the result of a technical error. Yet, the pressure from the conservatives was so strong that even the voluntarily suspension proposed by the chief editor failed to stop the Press Supervisory Board from shuttering the paper. Following publication of the article, 26 members of the parliament interpellated Jannati and labeled the article “obscene.”

One journalist working for Bahar spoke to Al-Monitor, asserting, “It is quite obvious that they were looking for an excuse. We have officially apologized. We have accepted that the article was unsuitable for publication. What else could we have done? We don’t want complete freedom of speech, but if they wanted to show a little tolerance, they would accept our letter of apology. The devastating thing is that numerous journalists, whose source of income was coming from this newspaper, are left unemployed.  They can no longer pay their rents or their mortgages. Unemployment is very depressing. Today I was about to go to the office, around noon, when I just remembered that the newspaper was shut down. It almost made me cry.”

A reformist editor of another paper in Iran believes that what happened to Bahar does not necessarily forebode a new crackdown on the press similar to those under Khatami or even President Mahmoud Ahmadinejad. He told Al-Monitor, “When a newspaper does not have an editor in chief and is being managed in an unorganized manner, these things can happen. Anyone who has worked as a journalist for even one day in Iran knows that publishing such an article will result in the newspaper being closed down. Rouhani promised to expand the freedom of press, and he has, but he never promised that newspapers could question the position of Khamenei and still operate. This is beyond his authority.”

The editor further observed, “Rouhani said, from day one, that he is looking for moderation. It is fine if a newspaper wants to be a little more radical, but it is not logical to ask for the full support of the government. The authority of the president in Iran is limited.”

Despite the closure of Bahar, it is undeniable that in the last three months there has been more press freedom in Iran, with reformist newspapers having increasingly challenged what were previously red lines. In September, the reformist Shargh Daily published an interview with Alan Eyre, the US Department of State Persian-language spokesperson, and many reformists journalists who had essentially been silenced for four years are no longer afraid to take a critical position when interviewing conservative or even hard-line politicians. What’s more, some publications that had been closed down have recently been issued permits to once again operate.

Alireza, a 40-year-old civil engineer reading the headlines at a newsstand on Valiasr Street in Tehran, offered, “I think the situation has improved a lot for the press in the past three months. I did not know that a ban had been imposed on Bahar, but I know that the newspapers Hammihan and Neshat received publishing permits. Other newspapers also seem to be publishing more freely these days. I think, regardless of what happened with Bahar, I have reasons to be hopeful.”