Rafah crossing used as a bargaining chip in Gaza crisis

The economic and humanitarian interests of the people of the Gaza Strip and the Sinai Peninsula are relegated to the political game that will determine whether the Rafah crossing is reopened or not. 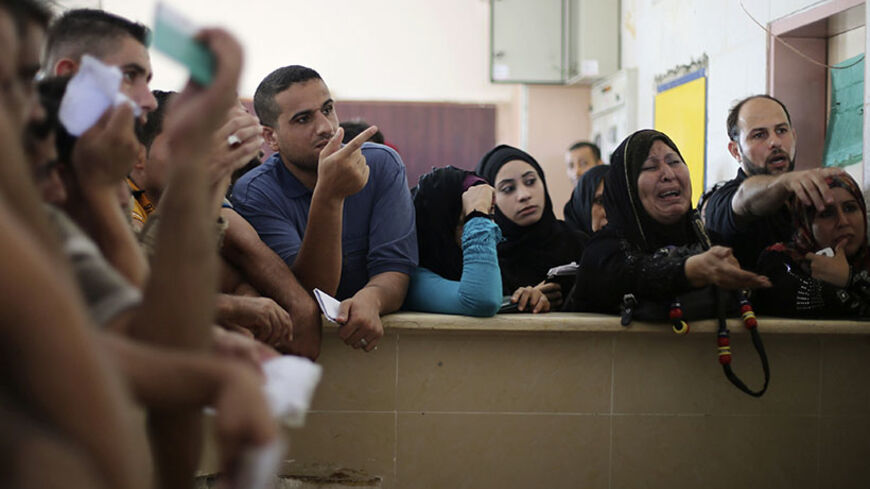 RAFAH, Egypt — The Rafah border crossing, which is the only link between Egypt and the Gaza Strip, has become a political tool through which the recent battles between post-Arab Spring alliances are being fought.

The crossing constitutes the only outlet and the last hope to improve the conditions of more than 1.8 million Palestinians in Gaza. However, it was transformed into a political bargaining chip, to the detriment of humanity and in favor of political interests in the region.

Ever since Abdel Fattah al-Sisi assumed the Egyptian presidency after the ousting of the Muslim Brotherhood’s Mohammed Morsi, the Egyptian media began to systematically level a series of accusations about the Rafah crossing, giving the authorities a justification to shut it down under the pretext of the “threat [it poses on] national security.” This decision was taken while turning a deaf ear to the will of the Egyptian people.

One of the accusations was that terrorists were using the crossing to enter into Egypt. In this context, Tharwat Jawda, former deputy head of Egyptian general intelligence, stated on Nov. 21, 2013, during a phone interview with Amany El Khayat’s “Sabah On” show — which airs on OnTV — that “every time the Rafah crossing was opened, a catastrophe or assassination of army and police leaderships would take place,” demanding its shutdown.

Talking about the authenticity of these accusations, a security source at Rafah's Border Crossings Authority told Al-Monitor, “The crossing is subject to a tight monitoring [system] from different security and sovereign bodies, including the general intelligence, the military and national security intelligence, the criminal investigation division and the security of the crossing.”

The source affirmed that travelers were subject to the scrutiny of all these bodies before crossing from or into Egypt.

He said, “Thousands of Palestinians are denied entry due to the tight measures adopted at the crossing. We have a list of banned individuals and those wanted by the Egyptian or Israeli security bodies.”

In conjunction with the war Israel waged on Gaza in July, a media war against Hamas and the Rafah crossing was launched in Egypt, which included some Egyptian media figures encouraging Israel to continue its war on Gaza until the extermination of Hamas.

Among the most famous statements was that of Azza Sami, deputy editor-in-chief of Al-Ahram newspaper, one of the most prominent national newspapers. She posted on Twitter: “Thank you [Israeli Prime Minister Benjamin] Netanyahu, may God bless you and those like you so that you exterminate Hamas and the Muslim Brotherhood traitors.”

The statement by Khayat, presenter of “Sabah On,” one of the most prominent talk shows in Egypt, also created a buzz. She said, “I hold on to my opinion that Hamas is a terrorist group and is behind what is happening. The goal is to open the crossing and import terrorism yet again into Egypt. Everyone knows that some brigades are awaiting to enter.”

A high-ranking government source in the northern Sinai Peninsula who requested anonymity, said in an interview with Al-Monitor, “Hamas claims that it is resisting to liberate the land. Yet, in fact, it resists occasionally according to its political and economic needs, at the expense of the souls of innocent Palestinians.

“Hamas has been trying all it can during the last months to engage in a war with Israel, so that the Rafah crossing would open. [This was done] for the economy and trade, and not for humanitarian purposes, or to liberate the land.”

He added, “If we accepted this scenario, then we are accepting [to have] a separatist state under the rule of armed militias on our borders, [a state] with regional and international agendas that go against the stability of the Egyptian state. This increases the risks, which might prospectively erupt in crises in a region that is [already] dealing with a lack of capabilities, rampant unemployment and a lack of political and economic solutions.”

The source affirmed that the Rafah crossing would not be totally shutdown in the face of a humanitarian crisis; students, patients and pilgrims would be allowed to pass. He explained that the crossing might be fully opened if the Palestinian Authority in Ramallah assumed its management.

Abdel Fattah Harhour, governor of northern Sinai, told Al-Monitor that the total number of wounded who entered Egypt for treatment during the Israeli aggression on Gaza was 219.

The Egyptian authorities refused the demand of Tunisian authorities to allow a plane to pass to Egypt, transporting wounded Gazans, after their number reached more than 10,000.

It also prohibited medical delegations and aid from crossing into Gaza, including a group of Palestinian doctors from Europe.

Speaking of the reasons behind the prohibition, a security source at the Rafah crossing told Al-Monitor, “There are adopted mechanisms that Egyptian authorities impose, in cooperation with the Red Cross and Red Crescent, to allow aid to pass.”

The reason behind closing the Rafah crossing is to tighten the blockade on Hamas-led Gaza, because Hamas belongs to the Muslim Brotherhood, the rival of the policies of the current ruling class in Egypt, according to a sheikh from the Sawarka tribe and a government source, both of whom requested anonymity for security reasons.

Hamas’ affiliation with the Muslim Brotherhood has altered the Arab approach to the Gaza conflict, which is characterized by the silence of the people who used to stand up against their leaders every time Israel waged a war on Gaza. But the blockade policy of the Gaza Strip does not enjoy unanimous support in Egypt, particularly from locals in Sinai.

Mustafa Sanjar, researcher and writer concerned with the affairs of Sinai and the border region, believes that the opening of the Rafah crossing constitutes an extension of the Egyptian national security.

He told Al-Monitor, “The crossing is a symbol of national sovereignty and should be completely open for travelers and [the transport of] goods without [being subject to] political stakes. This will dramatically end the use of tunnels as an illegal alternative that imposes threats on the national security in Egypt, and will allow a smooth and positive Egyptian presence in Gaza, instead of cutting political ties.”

“Every state has the right to impose specific security requirements that guarantee threats to the internal security are avoided. This is well known around the world without the need to permanently shut down the crossing under any justification,” he said.

Mohamad al-Barhama, a Sinai resident, told Al-Monitor, “Opening the Rafah crossing as was the case prior to 2006 will lead to the stabilization of the security situation in Sinai and to an economic boom. It will also facilitate the communication between thousands of Palestinians and Egyptians who are married.”

It seems that the Rafah crossing will remain a witness to the new regional policies that are being formed, as the needs of the Palestinians in Gaza and the residents in Sinai continue to be relegated.