Egypt scrambles to stop missiles launched at Israel from Sinai

Reports of rockets fired at Israel by militants in the Sinai Peninsula are an embarrassment for the Egyptian government as they struggle to contain insurgent groups in the region. 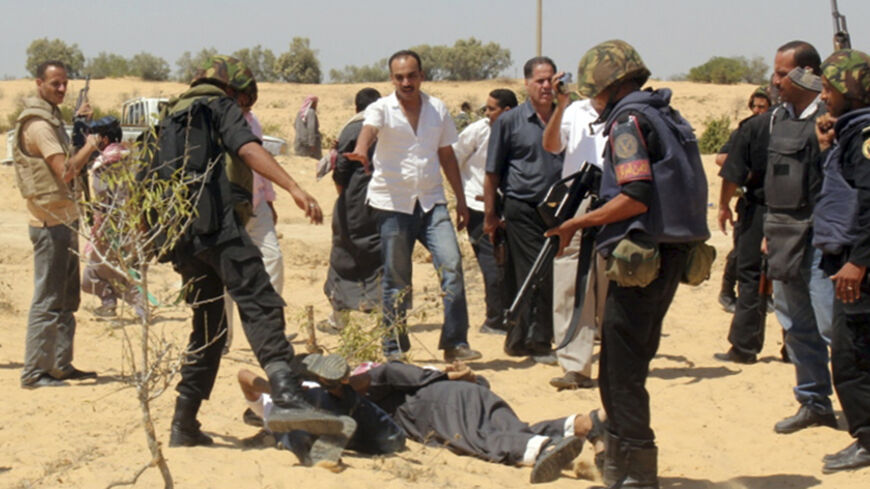 Egyptian security forces arrest suspected militants after a firefight at the al-Goura settlement in Egypt's North Sinai region, about 15 kilometers (10 miles) from the border with Israel, Aug. 12, 2012. - Reuters

On July 8, Israel started a new offensive — Operation Protective Edge — against the Gaza Strip in response to the constant raids on southern Israel, according to the statement of the spokesman for the Israeli Army, Peter Lerner.

With the war raging for days on end and with the escalation of its intensity, news has been circulating that missiles were launched from the Egyptian territories, namely the Sinai Peninsula, toward the Israeli border cities. Those missiles did not constitute a response from the Gaza Strip alone against Israel; it seemed that other parties in Egypt were responding too.

Maj. Gen. Abdel Fattah Harhour, the governor of North Sinai, denied that something of the sort had happened and said that no missiles were launched from Egypt on southern Israel.

Harhour, who spoke briefly to Al-Monitor, confirmed that the eastern border of Egypt is protected and that Egypt will not allow any party in the conflict to violate its sovereignty or use its territories in any offensive.

Although an Egyptian military source had previously declared that the soldiers of the Second Army managed to confiscate two missiles set to be fired from Rafah, North Sinai, on Israel, Harhour asserted that the missiles, which were confiscated, were in fact caught inside a tunnel before being smuggled to the Gaza Strip.

Ahmad Abu Draa, an activist in the Sinai Peninsula, told Al-Monitor that the source of the missiles launched on Israel was the Ansar Bayt al-Maqdis group, which confirmed the news on its official Twitter account and attached a video on July 10 showing the launching of five 107 missiles at the Israeli settlement of Bnei Netzareem. On July 16, the group posted a lengthy video titled "Grand Invasion of Eilat." The video showed for the first time, according to this post, details of an operation executed by several members of the group who infiltrated Israel and targeted several Israeli soldiers and officers.

Maj. Gen. Mokhtar Qandil, a military expert, told Al-Monitor that there is not one party that can be held accountable for launching the missiles from Egypt on Israel, even if Ansar Bayt al-Maqdis assumed responsibility for these operations. Moreover, he asserted that several terrorist and radical organizations in the Sinai Peninsula, affiliated with Hamas in Gaza, might be responsible for launching the missiles.

Qandil stated that these groups struck the Israeli settlements to implicate Egypt. The Egyptian army is not ready to enter the war, as Egypt is already preoccupied with its own development. It is not in its interest to get involved with the affairs of another state. Moreover, the launching of missiles from Egyptian territories is considered a breach of the Camp David provision that set forth, in its third article, that Israel and Egypt vow to refrain from issuing threats by force or using them against the other, directly or indirectly, and resolve all conflicts between the two states peacefully. This has been confirmed by Egypt’s inclination to launch a cease-fire initiative between Israel and Hamas, indicating that Egypt is seeking to calm things down between them.

According to Qandil, the solution would be to assassinate the members of these groups in the military operations that the Egyptian army is waging against them in the Sinai Peninsula. They should not be arrested, but rather killed instantly because they are a threat to the country.

He also said the parties that want to clash with Israel — in reference to Hamas and the groups supporting it in the Sinai Peninsula — must first prepare themselves with weapons and equipment and compare their strength to their enemy’s. Otherwise, all parties would be implicated.