Herzog stands by Netanyahu on Gaza

In an interview, Israeli opposition leader Isaac Herzog explains that he backed the operation in the Gaza Strip in the interest of solidarity, but when the dust settles, nothing will have changed between him and the prime minister. 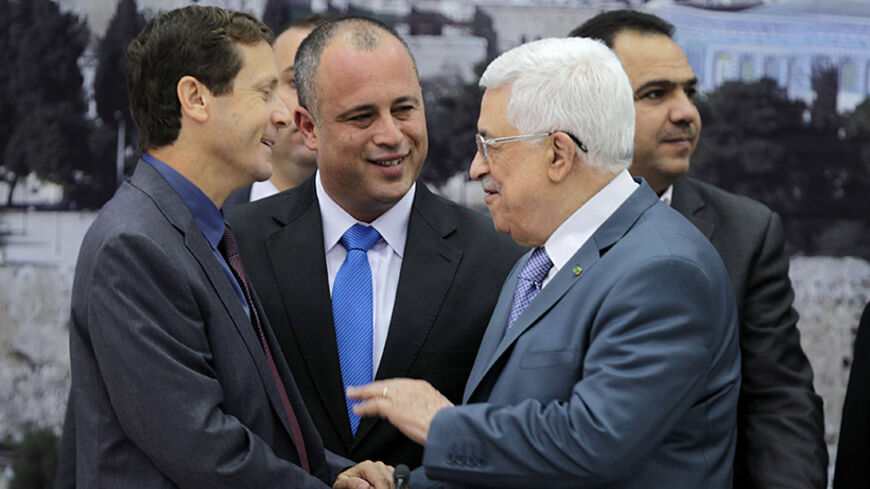 On the evening of Aug. 3, the chairman of the opposition, Knesset member Isaac Herzog, and US Ambassador to Israel Dan Shapiro arrived together at Soroka Hospital in Beersheba to visit people wounded in Operation Protective Edge.

Two days earlier, on Friday evening, Prime Minister Benjamin Netanyahu scolded Shapiro over the phone, demanding that the US administration back him up while he deals with Hamas, rather than doubting his intentions. Given the tension between the two governments, it seems as if the ambassador considered Herzog’s invitation a good opportunity to declare to the media that the United States supports Israel’s right to defend itself. Meanwhile, Herzog went out of his way to praise Israel’s friendship with the United States for its help in funding the Iron Dome defense system.

On Friday morning, Herzog, accompanied by two Labor Party Knesset members, Stav Shafir and Merav Michaeli, gathered 50 foreign ambassadors in Tel Aviv for an overview of the operation in Gaza. Throughout his talk he threw his support behind the military actions taken by the Netanyahu government. On more than one occasion, when asked difficult questions about Israel’s aggressive behavior in the Gaza Strip and about the killing of civilians, he found himself forced to defend the prime minister.

Given all the critical barbs that Netanyahu faced throughout the war not only from his coalition partners, but even from senior members of his own party, he could not have hoped for a more supportive and statesmanlike opposition leader. Herzog and almost all the members of his faction gave real-time support for the military operation, distinguishing them from the Meretz Party, which positioned itself overtly to the left of the Labor Party and has called for a cease-fire from the start of the campaign.

On the many occasions that Netanyahu briefed Herzog over the past few weeks, the atmosphere was quite pleasant, making it obvious that the prime minister preferred the company of Herzog over most of his ministers.

Judging by the initial polls, Herzog’s strategy worked. According to one poll released by Israeli TV Channel 10 on Saturday night, the public related positively to the way the chairman of the opposition acted during the operation. In fact, Herzog came in fifth in a ranking of public satisfaction, after chief of staff Benny Gantz, Netanyahu, Defense Minister Moshe Ya’alon and Economy and Trade Minister Naftali Bennett. Foreign Minister Avigdor Liberman and Finance Minister Yair Lapid found themselves at the bottom of the list.

As we have already seen, Herzog was not alone in his party. He may have set the curve, but it looked natural and easy for almost all the other members of his faction to take a strategic approach that supported the military’s ground incursion, while at the same time calling to deeply explore all possible diplomatic paths. Former party leader Shelly Yachimovich appeared frequently in TV studios to back Netanyahu, while calling for commensurate diplomatic moves. So did the party’s faction head, Knesset member Eitan Cabel.

There was even someone in the Labor Party who thought that the prime minister should have launched the ground assault in Gaza earlier. That was Knesset member Omer Barlev, a colonel in the reserves and former commander of the Matkal General Staff Reconnaissance Unit. Barlev also happens to be the son of the Israel Defense Forces’ eighth chief of staff and former Labor Party Knesset member Haim Barlev. By appearing in frequent interviews throughout the operation, he was able to position himself as one of his party’s top security experts.

On Monday, Barlev posted to his Facebook page, “It is important for me to tell the citizens of Israel in general, and the citizens of the south in particular, that as far as I am concerned, the fighting must not end until the operation’s minimal objectives are achieved and Hamas stops firing its rockets. In my opinion, even if it was too little, too late, the moves taken by the prime minister were the right moves, especially the current withdrawal. … But it is also important to say here and now that if the rocket fire continues and other moves fail to achieve their objective, we will have no choice but to go back in and exert serious pressure on Hamas. I am not talking about conquering Gaza, … but under no circumstances should we go back to that same dribble of rocket fire on the south. It is our obligation. … We will work hand in hand, constantly striving for diplomatic achievements."

Operation Protective Edge highlighted the differences on the left between Meretz and Labor, which seems to have gone back to its late Prime Minister Yitzhak Rabin-inspired roots: hawkish militarily, but with a diplomatic arm that operates simultaneously. The behavior of the Labor Party, and particularly Herzog’s actions, raise the question of whether we are witnessing a closer partnership with Netanyahu, which could culminate in the Labor Party actually joining the coalition due to the current “security and diplomatic challenges,” as it is customary to say in political circumstances such as these. The political system is abuzz with talk about initial feelers, led by the ultra-Orthodox parties, to establish a National Emergency Government, but these feelers have led nowhere so far.

In an Aug. 4 interview with Al-Monitor, Herzog rejected speculation that this was the beginning of a partnership with the prime minister, saying, “I am Netanyahu’s political rival. As soon as the fighting is over, we are going back to being in the opposition.”

It is Herzog’s assessment that the current coalition will not survive, and that it will come apart in a matter of months. So far, that sounds more like wishful thinking than realistic political analysis. At the present stage, almost all the coalition partners have much to lose if there are early elections. Even the two center-left parties in the coalition — Kadima, headed by Justice Minister Tzipi Livni, and Yesh Atid, headed by Lapid — are deeply embedded in the Netanyahu government. At the same time, the chairman of the Labor Party is correct when he says that Netanyahu will experience a political firestorm from the right in the very near future.

The conversation with Herzog took place on Monday night, after he spent the whole afternoon paying condolence calls with his wife Michal to the families of the fallen soldiers. The couple has visited the homes of dozens of fallen soldiers already, and in all but one, they heard unreserved support for the operation in Gaza. Herzog said that this only reinforced his sense that he was right in supporting the prime minister. “There is no controversy about this war,” he said during the interview. “As far as I am concerned, the lives of people in the communities surrounding the Gaza Strip, who are living under fire, are intolerable. I said in advance that I don’t play opposition during wartime. I made that decision based on my conscious and my values. The people who live in the kibbutzim in the south are our people, Labor Party people.

“I think we should distinguish between statesmanship and politics. Once the fighting is over, I will lead the opposition with all the strength I can muster and work to establish a large center-left bloc to serve as an alternative to the right. With the operation about to be over, Bibi will be right back in the same political situation that he was in before it started. He will be under pressure from within the Likud and from the right flank of his coalition. Nothing has changed. This is a bad government, and it must be replaced. We have extended credit to a military operation intended to restore peace and quiet to the south.”

Asked, "How do you rate the way that Netanyahu functioned during the war?" Herzog replied, "Netanyahu will be assessed by the results. My colleagues and I gave our backing to the decisions of the political and military leadership, which were reasonable and sensible throughout the operation. At the same time, I also said that this operation exposed a deep failing in our relationship with the United States. I also said that a diplomatic maneuver has no less of an impact than a military maneuver."

Al-Monitor asked, "Aren’t you concerned that this support will be detrimental to you? After all, you are strengthening your political rival."

Herzog answered, "Absolutely not. I did the right thing, and that does not contradict what I think. I have said so on countless occasions that Netanyahu made a mistake when he weakened [Palestinian President] Mahmoud Abbas, and that we have no choice but to take the diplomatic route. From that perspective, nothing has changed. The difference between us is obvious."