Hamas soon can pride itself on imposing an agreement on Israel, which actually opens the way for a future Gaza state — when in fact it only is obtaining what was reasonable to give the Gazans many years ago. 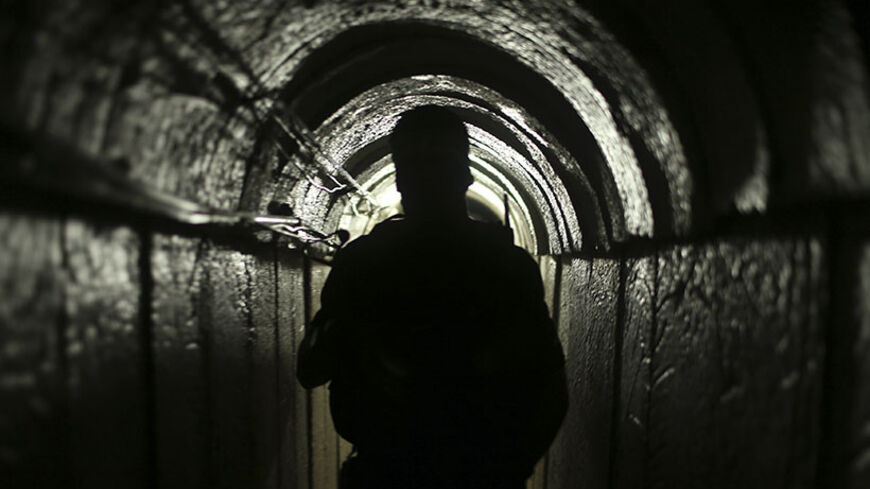 A Palestinian fighter from the Izz ad-Din al-Qassam Brigades, the armed wing of the Hamas movement, is seen inside a tunnel in Gaza, Aug. 18, 2014. - REUTERS/Mohammed Salem

Israel agrees to remove the blockade on Gaza; Israel agrees to waive its demand of demilitarizing Gaza; Israel agrees to “quiet for quiet” and thus to conclude the Protective Edge campaign. These are the latest reports (Aug. 19) arriving from Cairo. We can assume that within a few days, Hamas will declare that it won the campaign by virtue of its military might, its determination and persistence. Apparently, Israel will also declare that thanks to the military operation, peace and quiet will return to the residents of the south.

One can assume that both sides are correct. Although Gaza suffered a hard blow, Hamas succeeded in “persuading” Israel and the world that a closure extending more than seven years is not legitimate and if Israel wants to ensure peace and quiet to its residents, it must remove the blockade and allow the residents of the Gaza Strip to live and govern their lives by themselves.

According to the settlement that is emerging in Cairo, it seems that the discussions concerning Hamas' demand to build a seaport and an airport will be delayed by a month; in other words, these demands were not rejected outright. As the Protective Edge campaign winds down, Hamas demands, and apparently will receive in the future, open crossings and symbols of a sovereign state. In effect, we can consider that the first cornerstone of the Gaza state has been laid in Cairo. The residents of the West Bank, who relied on the promises and path of President Mahmoud Abbas to establish a Palestinian state by way of peace negotiations with Israel, will certainly feel bitterly disappointed.

At the beginning of the closure imposed on Gaza in the wake of Hamas’ military coup in 2007, I thought that the closure was immoral, inadvisable, and would only achieve the opposite result. Israel counted the daily calorie consumption of the Gaza residents to ensure that they would not have an “abundance” of food, yet still have enough to eat without causing a humanitarian disaster. Gasoline was provided sparingly, thus car and cab owners were forced to fill their vehicles with cooking oil, causing a heavy white cloud to cover the Gaza sky.

Life in Gaza was asphyxiating and miserable, a day-to-day existential struggle that extended more than seven years. Now, when an agreement will be signed soon to remove the closure from Gaza, I congratulate the State of Israel for finally learning the correct lesson. The residents of southern Israel and the residents of Gaza paid a heavy blood price for the blockade.

No one can state with certainty that if not for the closure on Gaza, Israel and the Hamas would be enjoying a peaceful coexistence. It is quite probable that they would not. But it is a fact that Hamas’ efforts in the period of its rule over Gaza were devoted to a combined goal: to ensure the movement’s rulership, and to ensure the lives of the Gaza residents.

On the other hand, the removal of the blockade and bequeathing national emblems to Hamas were achieved by the launching of rockets, the digging of terror tunnels and the training of shahids (suicide bombers). This could bear a dangerous significance for the State of Israel.

From the Hamas perspective, the launching of rockets over the years on civilian communities has proven to be a successful tactic. Thus, it may choose to use the proven weapon in the future if it feels, for any kind of reason, that its regime is in danger (even if such a situation has no connection to Israel).

This and more: Those who believe that controlling and supervising the crossing points — missions which will probably be entrusted in the hands of Abbas' people — will strengthen the Palestinian Authority (PA) chairman, are greatly mistaken. They are also mistaken if they believe that this will give Abbas a first foothold on his way back to Gaza. Abbas will only serve as the token policeman at the Rafah crossing points and other passages that will be opened due to Hamas.

The Gaza state that is currently taking shape perpetuates the Hamas regime and its path, together with its future inspiration for the Palestinians. The residents of Gaza and the West Bank will reach, and rightly so, the following correct conclusions regarding the results of the Protective Edge campaign: that Israel only understands force and that Abbas’ ways have failed.

We can already begin the countdown to Abbas’ last days as chairman of the PA. There were many in the West Bank who accused Abbas in the past of treason for security cooperation with Israel, which Abbas himself qualified as “holy.” Now, when diplomatic negotiations with Israel led to nothing while Hamas proved that it can force Israel and the world to discuss issues of stately value — Abbas has no chance of survival.

In the past, Israel argued over and over that the Gaza residents should look at the West Bank’s economic development, to envy them and glean the right conclusions. Various experimental proposals regarding “economic peace” were released, to be implemented in the West Bank in 2008. All this was designed to avoid making hard decisions in Israel regarding the evacuation of settlements in the West Bank and reaching a peace agreement with the Palestinians.

In reality, nothing happened. The West Bank residents remained frustrated and disgruntled. Israel enlarged the settlements and humiliated the PA chairman time after time. Israel’s official representatives, including Prime Minister Benjamin Netanyahu and Foreign Minister Avigdor Liberman, claimed not only that Abbas was no partner for peace, but that he was an actual stumbling block.

From now on, Gaza won’t be envious of the West Bank. On the contrary. The West Bank residents, who have not seen peace reaching their land, will be envious of Gaza’s seaport and airport. Of course, these will not be built in the near future, but the very fact that there is talk about it and that Hamas allows its residents to view it is a realistic option, serves to spread great pride among Gaza residents and allows them to dream.

West Bank residents were deprived of this option to dream because of Israel’s erroneous policies. Hamas, by following its own path, was not only victorious over Israel, but also over Abbas. Hamas’ will and aspirations of holding onto power in Gaza and proving to itself and everyone else that the PLO is not the sole legitimate representative of the Palestinian nation, brought down catastrophe on Gaza Strip's residents, but also won Hamas international recognition.

The closure on Gaza will be removed in the near future. Israel was not wise enough to remove this blockade even when it was clear that the closure was ineffective in eliminating Hamas. Now Israel will remove the closure from the Gaza Strip, but will still face growing international boycotts. How sad.