Iran's supreme leader rules out broader engagement with US

Iran's supreme leader supports the continuation of the nuclear talks but has criticized bilateral talks between Iranian and US officials. 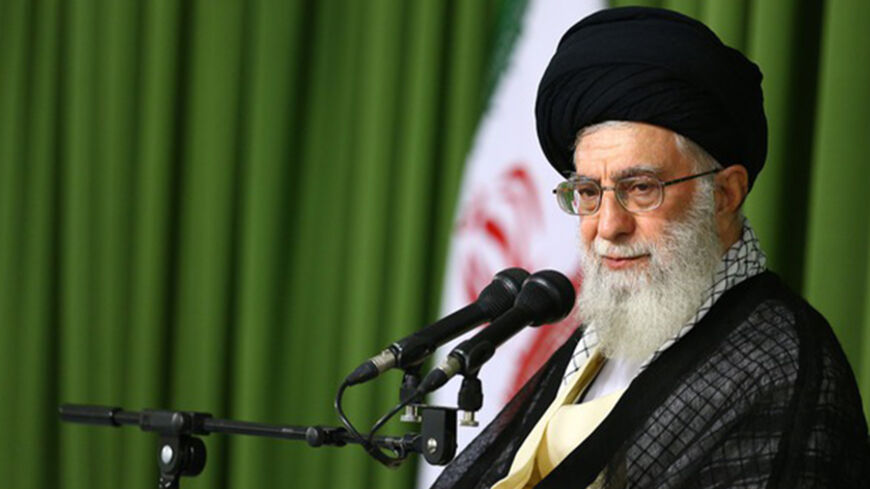 Iran’s Supreme Leader Ayatollah Ali Khamenei spoke today, Aug. 13, to ambassadors, foreign diplomats and officials from Iran’s Foreign Ministry. He welcomed new Iraqi Prime Minister Haider al-Abadi and said he hoped that Abadi would convene a new government. He also said that while he supports the continuation of the nuclear talks, bilateral talks between the United States and Iran in the nuclear negotiations are not only pointless, but can cause "harm."

According to Khamenei.ir, in response to President Hassan Rouhani’s recent speech in which he said Iran would engage with the world, the supreme leader said, “There are two exceptions in this: the Zionist regime and America.” He explained, “Relations with America and negotiations with this country — other than on specific matters — not only do not have any benefit, but have harm. And what wise person would pursue something without benefits?”

Ayatollah Khamenei said, “Some would pretend that if we sit at the negotiation table with America, many of our problems would be solved. But we knew this wasn't so, and the cases of the last year once again proved this reality.”

He went on to say that in the recent past, there had been no diplomatic communications between US and Iranian officials, but that changed with the nuclear talks between Iran and the five permanent members of the UN Security Council plus Germany. Therefore, US and Iranian “officials at the level of the Foreign Ministry had calls, meetings and negotiations, but in this communication, not only was there no benefit, but the tone of the Americans became harsher and more insulting, and their expectations rose.”

The supreme leader praised the Iranian negotiators for giving a “stronger response” to comments made by US officials, but added, “It became clear in the negotiations, in contrast to the assumptions of some, [that they] did not help anything.”

“We don’t forbid the continuation of the negotiations, and what [Foreign Minister Mohammad Javad] Zarif and his friends have started and which has progressed well up to today will continue. However, this was another valuable experience for everyone for us to know that meeting and talking with the Americans absolutely has no effect on decreasing their enmity and is without benefit.”

He went on to say that holding meetings with the United States will inspire accusations that Iran has “doubts” about its positions and “The Westerners, with their massive propaganda, will make the Islamic Republic appear passive and conflicted.”

Ayatollah Khamenei also addressed Iraq during the speech, saying, “God willing, designating a new prime minister in Iraq will untie the knot and lead to the establishment of a government so that they can work and teach a lesson to those who want to foment sedition in Iraq.”