When will the US, Europe wake up to the threat of radical Islam?

With the murder of James Foley the West starts understanding the danger of radical Islam, internalized already by Israel, Egypt, Jordan, Saudi Arabia and even by Palestinian President Mahmoud Abbas. 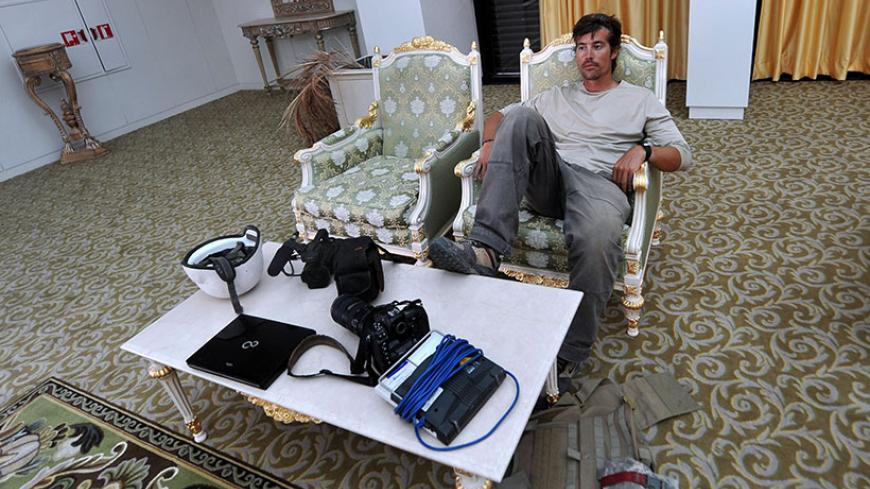 James Foley rests in a room at the airport in Sirte, Libya, Sept. 29, 2011. - ARIS MESSINIS/AFP/Getty Images

On Aug. 19, Israel attempted to assassinate the “head of the snake” — Mohammed Deif, commander of Hamas’ military wing. As I’m writing this (on Aug. 21), it remains unclear whether the attempt succeeded. Hamas denies Deif was harmed. But there are growing indications to suggest that Deif was indeed inside the bombed building in Gaza City's Sheik Radwan neighborhood. If he was inside, there’s no way he could have survived the attack. All that was left of this multistory building is a pile of rubble. Unlike the past, this time Israel had no second thoughts about which armament to use. The building was razed with one-ton bombs to ensure that if Deif was inside, he would stand no chance of survival.

Two days later, in the early morning hours of Aug. 21, the Israel Defense Forces (IDF) killed three other senior Hamas militants — Mohammed Abu Shamalah, Raed al-Attar and Mohammed Barhum. Shamalah was said to be the chief of Hamas’ “southern command,” whereas Attar was the equivalent of a brigade commander.

Is this the victory photo that Israeli Prime Minister Benjamin Netanyahu had been waiting for? Is this the tiebreaker that will finally force Hamas to fold and end the current round of hostilities without having scored any significant achievements? We will find out in the coming days.

Meanwhile, it's time to deal with the broader picture, namely the watershed and grizzly affair that the world — or at least large parts of it — has experienced. “The beheading of journalist James Foley is another step before the penny finally drops in the West,” an Israeli, who until recently held a senior and central defense position, told me. “I don’t think that the West fully comprehends who we’re fighting with here. But I do think that this will happen at some point, and that it won’t be before too long.”

In recent weeks, I have been holding a series of talks with prominent Israel officials from different fields on the subject of the war against radical jihad. We discussed the rise of the Islamic State (IS) and the growing power of various jihadist groups in the region. We also broached the dismantlement of the statehood framework, which was dictated by the superpowers, in favor of tribal frameworks, primal emotions and Islamic radicalism. The war of civilization between “life seekers” and “death sanctifiers” was also addressed. And in the end, we deliberated on the question of how it's possible that, after all of this, the West still continues to bully Israel and denounce it. We also wrestled with the question how it's possible that international fact-finding commissions continue to be formed and relentless efforts are made to tie the hands of Israel, the only true democracy in this turbulent Islamic ocean.

In recent weeks, the gruesome beheadings from the school of IS burst into those discussions. The Internet makes these video clips readily accessible to any user.

All of a sudden, the bleeding hearts in the enlightened West could see what’s going on in the real world while they are talking about “human rights,” “liberties of the individual” and a bunch of other empty slogans behind which there is nothing but hypocrisy and obtuseness.

How horrifying it was to see the images of him kneeling in the desert, and standing next to him the executioner armed with a knife. Foley recites a text dictated to him. I don’t know whether he realized that those were his last moments. I hope not. The horror reaches new heights when the anonymous executioner starts talking with a clear British accent.

Many jihadists hold British, Scandinavian, French and other nationalities. They are the children of immigrants from Islamic countries who were naturalized and educated in enlightened Europe. On the face of it, they should have become an integral part of the continent, but in reality, they have only radicalized. They travel to Syria or Iraq to take part in a jihad and to behead people.

“Dear friends in Europe, perhaps even in the United States — prepare yourselves for the return of those citizens home,'' a senior Israeli political figure told me. ''All you need to do is to listen to what they are saying there — in between the beheadings,” the source, who's well known by all European and US government officials, said. Speaking on condition of anonymity, he added, “We in Israel have learned the hard way that we would do well to listen to the Arabs. They mean what they say. They profess their intentions.”

He was alluding to the repeated threats by IS butchers and other jihadist organizations, which promise to finish off the job in Syria, Iraq and the Middle East and then move on to Europe and the United States.

“We will drown America in blood,” they say. And they mean it. They own up to their intentions almost on a daily basis.

“There is no other choice, but the rules of warfare will have to change,” a former senior Israeli military jurist told me.

“Despite the fact that those rules have been revised in recent years, this revision is still a far cry from satisfying the understandable need of enlightened democracies to fight jihadist terrorism, which sanctifies death and see civilians as a legitimate tool for murderous manipulations and human shields,” said the jurist, who dealt extensively with adapting the doctrine of the IDF to the international law of war. "In a few years’ time, the world will realize — the hard way — that there is no way of overcoming this kind of terrorism by using conventional methods.

“When terrorists stockpile their entire rocket arsenal inside kindergartens, schools, clinics and mosques, when they fire from populated areas, when they turn private residences into war rooms, when they send children to play on the rooftops of a residential building when terror leaders converge inside, it makes them practically invulnerable,” he continued. “There was a time when you could turn a blind eye to such things. Today it’s harder. In Gaza, each round with Hamas is growing more difficult and deadlier than the previous one. During the Israeli disengagement from Gaza [2005], Hamas’ first rockets were only able to reach the town of Sderot [just a few kilometers from the border]. During Operation Cast Lead [2008-09], the rockets landed as far as Ashkelon and Ashdod. During Operation Pillar of Defense [2012], they got as far as Beersheba. Today, during Operation Protective Edge, their range has been extended to Tel Aviv and even close to Haifa [in northern Israel]. They have an infinite network of assault tunnels, small drones and many more means. This is the price Israel has to pay because the world would not let it fight Hamas effectively. But Israel is just the forward outpost. Soon enough, the West will understand that it is the real target of radical Islam. Hopefully that understanding won’t come too late,” the jurist concluded.

“What’s interesting in this whole affair,” says a senior Israeli defense official, “is that our region has already understood that. The Egyptians understood this perfectly well, ahead of everybody else. After all, they had to fight Muslim Brotherhood terrorism. They still do. They know that Hamas is a slightly more civilized variation of IS. But the breeding house is the same — the Muslim Brotherhood. Jordan understands this and so does Saudi Arabia. The Gulf states, except for Qatar, understand this. Even Palestinian Authority President Mahmoud Abbas knows, deep down, that this kind of extremism threatens his way of life as much as it does ours. This is why moderate Egyptians and Palestinians did not let Hamas make any real gains in the negotiations in Cairo. The organization must not be allowed to have any tangible gains or otherwise it will only be incentivized to further radicalize and gain power.”

Let’s go back to my first interlocutor at the beginning of this article. “It seems to me that most leaders already understand this,” he opines. “The last one to understand this is President Barack Obama. His Cairo speech during his first term will haunt him for the rest of his life. Already now it looks like some bizarre act. In five or 10 years from now, it will look almost radical. Obama gambled on the Muslim Brotherhood as the watchdogs of democracy in the Middle East. But he, too, already knows the truth. What worries me is that the European nations have yet to understand this. It has not dawned on them yet. It’s very 'cool' to be anti-Israeli and to demonstrate for the 'liberation of Palestine' and against the 'genocide' in Gaza.

''Nobody really looks at the finer details to discover that there is no genocide in Gaza and that all Hamas needs to do to save its people is to stop shooting rockets at civilians. There is no need to liberate Palestine because there was never such a state, and because the Palestinians in Gaza got rid of the Israeli occupation nine years ago and because the Palestinians in the West Bank received full autonomy and have been rejecting for the past seven years any proposal to set up their own independent state.

''In Europe — whose 'European' flair is starting to fade — the conspicuous Islamic presence dictates this vocal wave of anti-Semitism mixed with ignorance and hatred that was enhanced through brainwashing. It is possible that one day the Europeans will understand what the real situation is and try to fix it. There’s a pretty good chance that this will happen too late. By then, the situation will be beyond repair.”

That’s as far as the doomsday prophesies of my sources go. All of them are mainstream Israelis, seasoned and senior experts in their respective fields (legal, political, military). They all support the peace process and the two-state solution, but they start losing faith — not in the Palestinians but in the Europeans and the Americans — the enlightened world. And that’s dangerous.

And yet, a silver lining looms; lo and behold, even Obama starts grasping the momentous hour. What he said at a news conference on Aug. 20 following reports on Foley’s beheading would not put Netanyahu to shame. But it’s not only Obama. More and more public figures, journalists, opinion setters and large swathes of the public in the enlightened world are starting to get the picture. Articles to this effect have started appearing here and there. Will more follow? We must hope they will.