Lapid tries to become a statesman

The Gaza war tampered with Finance Minister Yair Lapid's plan to pass a bill on housing prices, but did not delay his initiative for a regional conference. 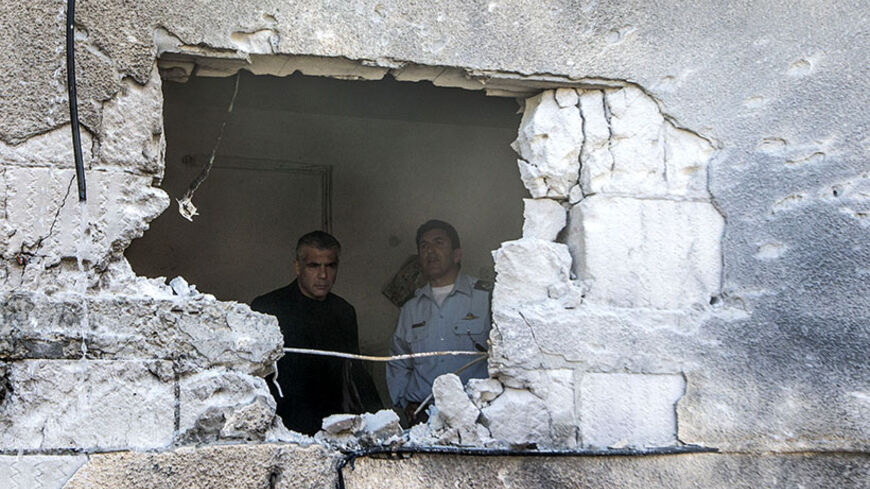 Operation Protective Edge caught the chairman of the Yesh Atid party, Yair Lapid, in a positive momentum. After barely treading water in the polls, which showed public dissatisfaction with his performance as finance minister, he has managed to halt the negative trend and create for himself a positive perspective with his proposed Zero VAT Law on the purchase of a first apartment.

Having presented this bill, Lapid was no longer considered a politician trapped in a race for survival, dragged along by events and steadily losing the enormous credit he had earned in the last elections. Instead, he was was transformed into an instigator of a revolutionary socioeconomic move. He managed to relay once again a sense of freshness and innovation, while proving that his heart was in the right place when he confronted the Finance Ministry bureaucrats, who opposed the plan. He showed resolve when he promised that the law would go into effect by early September. It was because of the finance minister’s persistence that the high demand for apartments began to drop considerably.

Then, just when it seemed as if Lapid was leaving all his troubles behind him, the conflict in Gaza erupted, and security and diplomatic issues suddenly dominated the national agenda. Although the finance minister is a member of the Security Cabinet which deals with these issues, the war was his baptism by fire in that very select forum. In other words, when compared with the other members of that forum, he was still at a clear disadvantage on security and diplomatic matters. As far as the public is concerned, he is not on par with the prime minister, defense minister, foreign minister or justice minister. He is even considered less adept in these issues than Minister of Economy and Trade Naftali Bennett, who may lack Cabinet experience just as Lapid, but who did serve as an officer in an elite unit. While Bennett and Foreign Minister Avigdor Liberman detached themselves from the government’s policies during the military operation and outflanked Prime Minister Benjamin Netanyahu from the right, the chairman of Yesh Atid had no choice but to align himself with the prime minister and back him, a position which hardly won him any new support from either the right or the left.

As if that were not enough, his Zero VAT Law, which should have brought back some of the voters who had abandoned him, took at the same time a beating in the Finance Committee from the ultra-Orthodox parties and the Labor Party, which managed to block its approval for the time being. Celebrating a legislative success would have been a welcome change of pace for Lapid, but now that the Knesset has gone on hiatus, Lapid was forced to come up with excuses for the public instead.

Polls conducted during the operation were no less of a slap in the face to the chairman of Yesh Atid. The most damning poll of all, which was released Aug. 7 on Channel 2’s main news broadcast, presented Lapid as the biggest loser in Operation Protective Edge. The figures showed a difficult setup as far as Lapid was concerned, with his party going from the 19 seats (out of 120) it holds to just 10 seats if elections were held today. But what should bother Lapid even more is the minuscule percentage of the population that considers him fit to serve as prime minister: a total of just 3%.

According to the same poll, Bennett was rated suitable by 11% of respondents, while Liberman and Chairman of the Labor party Isaac Herzog each received 9%. Right at the bottom of the list were Lapid and former Communication Minister Moshe Kahlon, who plans to run in the next elections as head of a socioeconomic party.

It is no coincidence that the news broadcast that released the poll contained two additional items, which were intended to distract people’s attention from the harsh figures concerning Lapid, and to present him in a different light. One report alleged that the finance minister chastised the prime minister during a Cabinet meeting three days earlier by telling Netanyahu that he had dealt a serious blow to Israel’s relationship with the United States. Political reporter Udi Segal described that conflict as “vocal.” In the second item, economic reporter Keren Marciano said that Lapid also scolded the governor of the Central Bank of Israel, Karnit Flug, because, in a statement released by the bank to mark the death of a cleaning woman’s son, it stated that the mother was employed as a “contractor.”

It seems rather obvious in both cases that the people being chastised weren’t the ones to leak the story. In fact, it is only natural that the trail leads to Lapid's associates. In both instances he is presented as an authoritative figure and responsible adult. The first time was when he stood up to the prime minister to rescue Israel’s collapsing relationship with the United states, and the second time was when he stood up to one of the most senior figures in the Israeli economy, while being portrayed as sensitive to social issues.

From this behavior it can be inferred that Lapid has revised his political strategic approach to stop the decline of Yesh Atid, and that he is trying to improve his performance and image as a leader in the diplomatic arena as well. After all, he has not yet abandoned his dream of one day becoming prime minister. The finance minister realized that he cannot compete with Netanyahu and Defense Minister Moshe Ya’alon, who are considered the most senior security figures in the country, but he also concluded that his lifeline could come in the diplomatic arena. He then went on to choose his issue: the shaky relationship with the United States, which received another resounding blow during the recent war. Lapid is now trying to use that relationship to overhaul his reputation.

Lapid has intensified the number and volume of his comments about the importance of Israel’s relationship with the United States, often lashing out at Netanyahu in this context. On Aug. 14, he published a post in Hebrew and English on his Facebook page, in which he described his close ties with senior officials in the US administration, while asserting that the relations with the United States are a strategic asset that must be maintained. The post also mentioned his recent talks with US Secretary of State John Kerry and with his friend Senate Majority Leader Harry Reid, expressing gratitude for their emergency aid for Iron Dome. “Sometimes we just need to say thank you,” he wrote.

At the same time, Lapid presented an initiative to hold a regional conference, to include the Gulf States, in Cairo. On Aug. 18, Lapid gathered his party at Yesh Atid’s headquarters in Tel Aviv to explain before the cameras why such a conference was vital. He then went on to say that he has been working with the relevant parties to ensure that it happens. It is safe to assume that among the “relevant parties” he mentioned were also senior American officials, with whom he has been improving his relationship recently. His initiative was based on a plan put forth by the former head of the Shin Bet, Minister of Science, Technology and Space Ya'akov Peri, who is Lapid’s diplomatic-security right hand in Yesh Atid. On the other hand, Peri did not appear in any of the images that were broadcast from the well-publicized event. Lapid wanted all the attention for himself. He realized that with Peri at his side, he would seem more like Peri’s disciple than anything else.

Will the finance minister succeed in rebranding himself as a statesman? Lapid now has a chance to exploit how weak Netanyahu is in the international arena and build himself up based on that. At the same time, it is fairly safe to assume that the prime minister will not allow Lapid to act independently and build up a relationship with the United States at his expense. No matter how shaky Netanyahu’s relationship is with the Americans, he still has the tools to besmirch his rival if that is what he wants to do. That is why Lapid still has to prove that he has also learned a thing or two about underhanded political maneuvering. Regardless of what happens, the next few months will be especially challenging for the young politician.