Kurdish female peshmerga fighters are joining the battle against the Islamic State to thwart any possible attack against Kurdish areas. 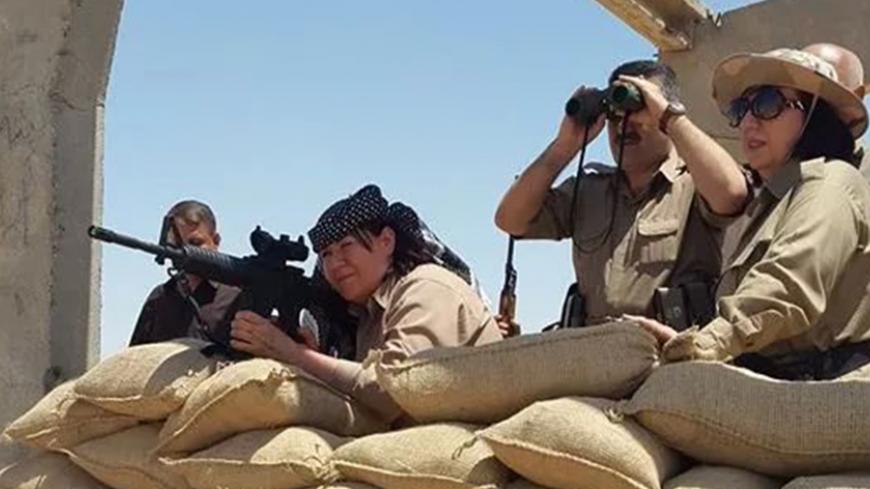 Fighters from the female regiment of the Kurdish peshemerga take their positions in Jalawla, Aug. 7, 2014. - Shaida al-Ameen 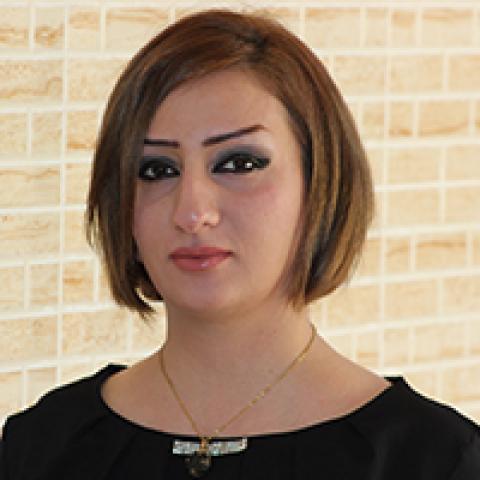 The military participation of women is not something new in the history of Kurds. At first, few women joined the ranks of fighters, while some used to dress up as men. However, when women had been allowed to enroll in the army, they used to provide services outside the battlefield such as medical aid and administrative and communication tasks. Their army work was limited to the support of war efforts, not combat-related duties.

Nevertheless, radical groups such as IS are imposing fundamental rules, especially against women, by calling for the implementation of radical measures such as female genital mutilation, imposition of the niqab and veil, marrying off women against their will and promoting sexual jihad in all areas and regions under the organization’s control. Hence, the female regiment of the Kurdish peshmerga in the Kurdistan Region of Iraq — which was established in 1996 — took the decision to fight against this hard-line group, warding off a possible attack in Kurdish areas.

The peshmerga female regiment consists of four battalions and one commander for every brigade. The ranks include officers and noncommissioned officers, while the highest ranks are held by female colonels, who serve as the regiment commanders. 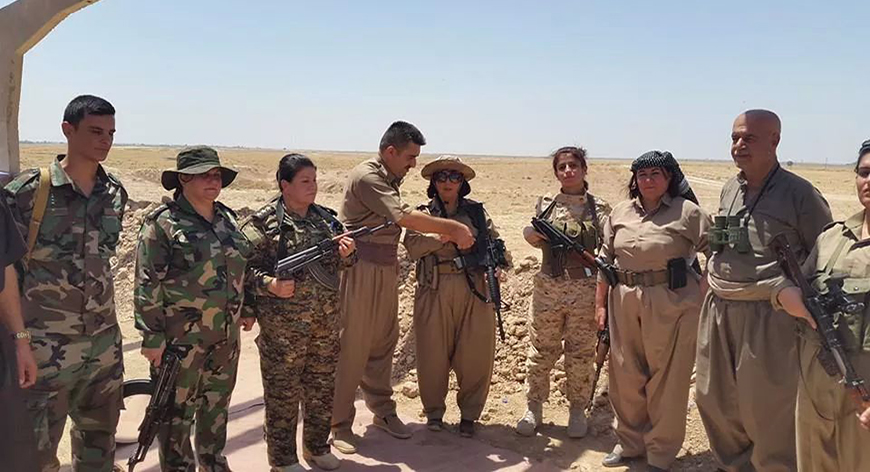 A group of peshmerga fighters (photo by Shaida al-Ameen)

Al-Monitor met Lt. Col. Lamiah Mohammed Qadir, one of the regiment's leaders, while she was performing her duties on the front lines of the peshmerga in Jalawla, 150 kilometers (93 miles) east of Baqubah, the capital of Diyala governorate.

“The peshmerga female fighters are fighting on the front lines along with men against IS in Kirkuk, Daquq, Jalawla, and Khanaqin. In addition to their participation in actual battles, women are providing the peshmerga men with necessary military materials and equipment,” she said.

Qadir added, “So far, there are no victims in our ranks despite being deployed on the front lines. Our sites have not been heavily attacked until now, unlike other military sites where men are fighting. It is not necessary for all ranks to start direct confrontations with IS. However, female fighters stand ready for any sudden attacks, as they have a military background that they acquired in previous battles, including the battle of liberation of Iraq in 2003, and their participation within the two axes of Khanaqin and Kirkuk, in which I took part. This is not to mention the battles they fought against the Ansar al-Sunna group in Halabja in 2002.”

Qadir, who was carrying a sniper rifle, said that the female fighters were not required to have certain education degrees to join the peshmerga ranks. “However, many of the female fighters hold college degrees, or are graduates of institutes or junior high schools, while others graduated from the military academy. We do not have any illiterate fighters among our ranks, as the Educational Directorate of Sulaimaniyah is keen on supervising their education,” she said.

Chelan Shakhwan is a fighter in the peshmerga female regiment, who talked to Al-Monitor about her daily activities. “We have two types of training: the traditional exercises that we do on a daily basis and the seasonal drills. As for daily trainings, our day starts at 6 a.m. with morning exercises for a full hour. We then attend theoretical, political, military, educational and cultural seminars and we perform our military duties. As for the seasonal drills, we start our day at 5 a.m. with theoretical studies on political, military and intelligence topics. We apply the theories in exercises in the courtyard, and we train to use all kinds of light, medium and heavy weapons. We are divided into groups; each group is specialized in one type of weapon such as sniper rifles, automatic firearms, RPGs or others. These exercises take place in military schools or special training locations, which are different from our camps where we operate on a daily basis. Seasonal training is carried out with male fighters.”

“We are now on the battlefield, but I'm married and I have a daughter, whom I left with my parents to fight against extremists. I'm happy to perform my national duty to defend Kurdistan,” Shakhwan said.