The international coalition against the Islamic State has provided weeks of training to prepare peshmerga fighters for a ground offensive to regain control of Mosul. 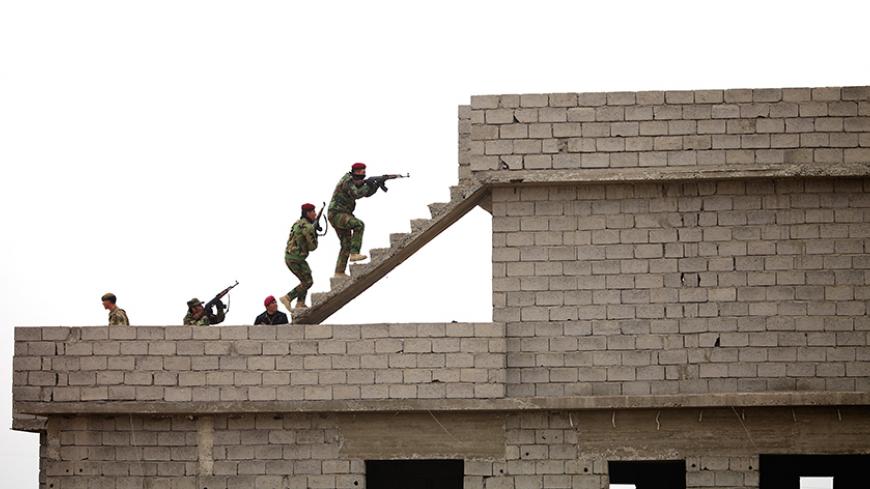 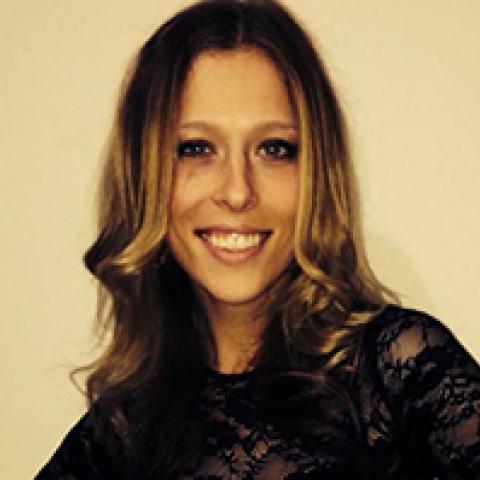 On a hillside in northern Kurdistan, peshmerga soldiers load bullets into magazines. A Dutch commander from the coalition forces watches as the peshmerga perform drills — from combat medical procedures and urban warfare training to live fire field exercises.

While the bombardment by US and allied forces have helped the Iraqi and Kurdish forces regain territory controlled by the Islamic State (IS), ground support is needed to gain control of territories such as Mosul, Salahuddin, Anbar and Diyala. In an effort to scale up the offensive, the peshmerga are receiving rigorous training from coalition military advisers. Troops from the Netherlands, Germany, the United Kingdom and Italy have devoted four weeks to training and advising a special platoon of the peshmerga fighters.

Sending in a unit of peshmerga forces into one of Iraq's chaotic cities invaded by IS requires precision and strategy, as well as field skills appropriate to the urban terrain. Obstacles such as narrow streets, snipers hiding in buildings and low-hanging power lines contribute to the difficulty of fighting in an urban environment. Forty peshmerga recruits received intensive training to improve their responses in urban terrain.

Michael Knights, a fellow at the Washington Institute for Near East Policy, told Al-Monitor that urban warfare is relatively new for the peshmerga, saying, “They're typically mountain fighters who control vehicle checkpoints, but now they are faced with a greater offensive operation that combines artillery, motorized infantry and air power.” 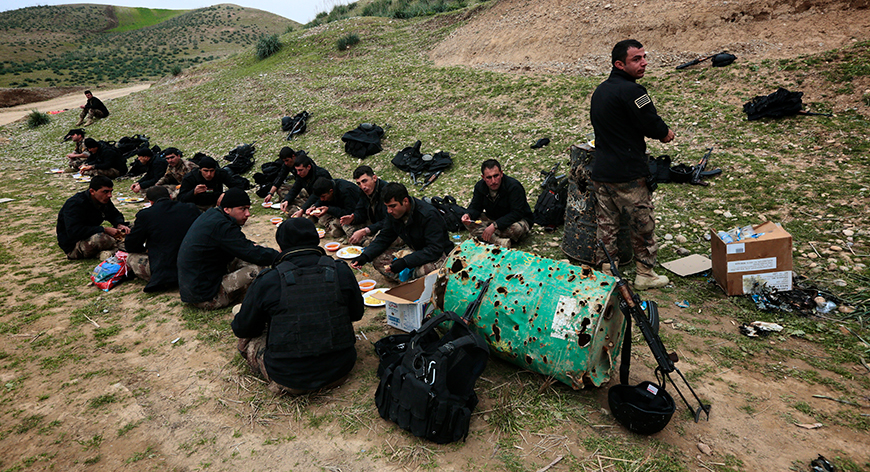 Kurdish peshmerga forces sit on a hillside sharing a meal between exercises, next to an oil drum with bullet holes from precision shooting drills, Feb. 20, 2015.

A Dutch translator for the coalition forces who asked to remain anonymous because of safety concerns told Al-Monitor, “If we can teach the peshmerga what we learn in Dutch basic training, it will be a massive advantage. All these small details and improvements they learn here will have big consequences in the battlefield. Especially how to move and shoot, everything really.”

In June 2014, IS captured Mosul, Iraq's second-largest city, after at least 30,000 Iraqi troops abandoned their posts and fled on foot to nearby Erbil. According to the International Organization for Migration, as many as 500,000 Iraqis have since fled their homes. An effort to liberate Mosul is planned for the coming months, according to a statement by Pentagon officials, but until then, the Kurds must wait and continue to prepare.

Knights told Al-Monitor that Mosul is one of the most economically significant cities that IS controls.

“Raqqa in Syria is a good basis for IS, but Mosul is the greatest achievement that it can boast about. So taking back Mosul, at least within the war in Iraq, is like taking the enemy's capital. Maybe if you take Mosul first, it makes taking other cities easier because, as Iraqis put it, 'You cut off the head of the snake.'”

Bakhtiar, who asked that his last name be withheld, is a peshmerga private who has been trained by the Dutch forces. He previously lived in the Netherlands before returning to his home in the semi-autonomous region of Iraqi Kurdistan to fight IS. So far, he has fought in the liberation of Jalawla, Saadia, Naqshbandi and Kobashi. While Bakhtiar and other recruits have field experience, he says their skills have improved since the training started.

“Some things we did not know, but we know them now, and we are definitely going to use them. How to attack, how to deal with roadside [improvised explosive devices], how to move back when the enemy is too strong. And not just going to the battlefields without preparations,” Bakhtiar told Al-Monitor.

Dutch military trainer Dustin, who asked that only his first name be used, says the ability to perform tactical and shooting maneuvers is an important skill to have as the peshmerga go into the towns taken by IS. In a valley surrounded by hills, the Dutch, German and English forces train the recruits in a three-flank attack. His fellow trainer Joey is perched on top of the hill watching the drill with binoculars. Oil drums peppered with bullet holes are evidence of the precision shooting training. 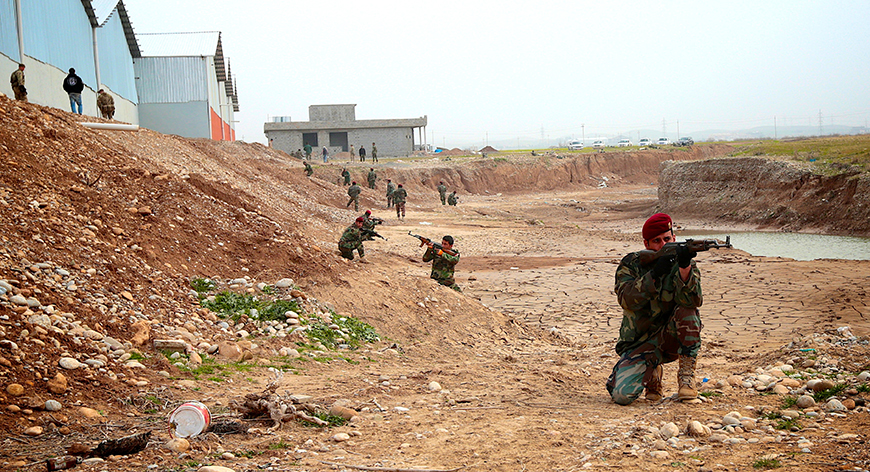 “This is something that are basic military skills, how to move under fire. This is a drill on how to neutralize the enemy. They attack over the three flanks in this valley to have optimal protection,” Dustin told Al-Monitor.

Additional training is given on how to bring the wounded from the battlefield. Simulations are conducted to teach the recruits to care for their soldiers in the case of an emergency. Pointing to a group of soldiers, Dustin explains the scene below.

“Now someone is wounded. This is part of the scenario, so it is not real. Because we give medical training, when someone gets wounded in the field, they need to be attended to. As you see, now someone is tending to the wounded peshmerga and using basic medical skills to keep the wounded alive,” he explains.

Recruits range in age from 18 to their late 50s. Their experience rarely goes beyond guarding buildings outside conflict zones. The older recruits have some front-line experience from fighting Iraqi forces in the 1970s and '80s, but often need a refresher course.

The commander of the Dutch coalition forces in Iraqi Kurdistan explained on condition of anonymity that the recruits are not thrilled about the physical side of training, but are keen to learn and take orders from more experienced military officers. “The added value of the Dutch here is experience in training," he said. "Generally, we can state that the people here are brave and skilled, but trainings like we give them is an unknown phenomenon here. So the experience the Dutch military brings absolutely adds value to the peshmerga.”

Coalition forces held a graduation ceremony on Jan. 25 for the recruits who took the four-week infantry course and the three-week course in which they learned how to operate assault rifles and anti-tank weapons provided by the German government. Standing in formation at Peshmerga Hall, the recruits listened to a commander from the coalition forces express his gratitude to the fighters and their families.

“But let’s not forget the people that are not here today. The families that let us use their homes to train how to fight in urban terrain. The shepherds and farmers who were asked to give up their land so we could train over there,” he told the recruits, commending the peshmerga for their dedication and enthusiasm throughout the course.

“I would again like to express our respect to you, the young peshmerga who are standing in front of us. It is you who are tasked to fight [IS] and defend freedom. It is an honor for all of us to support you in this fight. And I salute you for this.”