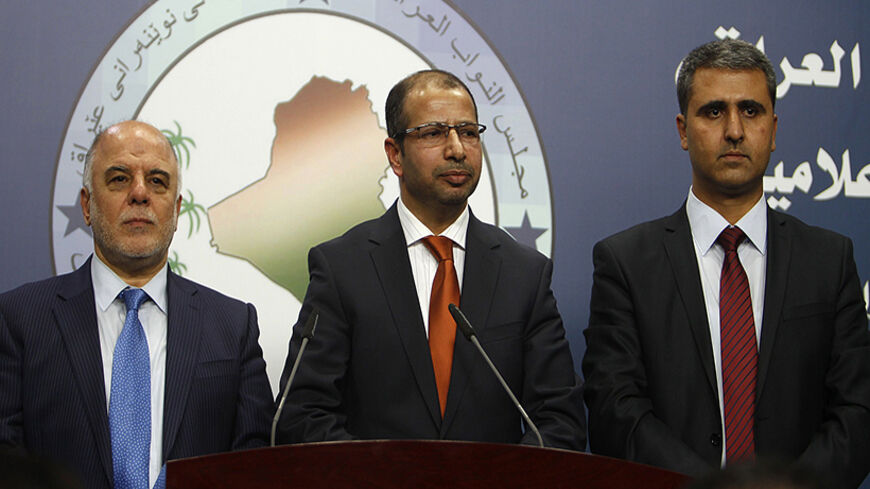 The 48 hours preceding the Aug. 11 appointment of Haider al-Abadi as Iraq’s prime minister-designate were decisive. Efforts to convince a defiant Prime Minister Nouri al-Maliki to resign were at their peak, even if they passed in vain.

Maliki wasn’t ready to accept any compromise or other points of view. He was aware a substitute had been chosen, yet he wanted to fight until the last possible moment. He believed that each vote he had gained in the election deserved its own battle. Maliki was desperate to keep his reign alive, while his friends and foes struggled to make him quit.

An Iraqi source close to Ayatollah Ali Sistani told Al-Monitor: “Around 10 days before the designation, an envoy representing the Iranian leadership visited Ayatollah Ali Sistani in Najaf. The envoy heard a clear stance from Sistani: Nouri al-Maliki shouldn’t continue as a prime minister. …​ Sistani won’t say this in public, but he had to tell it to the Iranians, because he thought the crisis in the country needed a solution and that the deadlock would complicate efforts to reach an agreement.”

According to Al-Monitor’s sources in Tehran and Baghdad, Iranian Supreme Leader Ayatollah Ali Khamenei, after learning of Sistani’s position, asked his aides to facilitate the change, calling on them to play a role in convincing Maliki to withdraw. “There were several alternatives for Maliki, one was him being appointed vice president. He refused. He was obstinate on the prime minister position and gave all those who tried [to talk] with him reasons for him not to accept. His main challenge was that he’s the leader of the bloc that won the election, and the constitution gives him the right to form the new government.”

As the negotiations continued, one of the historical leaders of the Dawa Party traveled to Tehran, possessing what he believed was a solution for the dilemma. The leader carried the name Haider al-Abadi with him, along with a brief on the man and his stances. Until that moment, Abadi was an outsider in a race that included several tough names, such as Adel Abdul-Mahdi, Ibrahim Jaafari, Ahmad Chalabi, Qusay al-Suhail and Tarek Najem.

Abadi, an ex-Londoner, was known to the Iranians, though he was never seen as a prime minister candidate. “Iranian officials told the Dawa representative that they would support a name that wouldn't intimidate the Sunnis and the Kurds,” said the source in Baghdad. “They believe that the priority today is to open closed channels with other parties. Moreover, they are quite sure the main problem is the lack of trust between the sects and ethnicities present in Iraq.”

Many described the change in Iraq as an in-house coup. The defection of almost half of Maliki's bloc was a blow to the incumbent prime minister, who didn't expect the change to happen in this manner. He always thought his enemies would be the ones targeting him, and even if his allies did the targeting, they would go about it in another way. Maliki reacted in accordance — maybe overreacted — but in the end, he had to abide by the rules, even though at the time of this writing his case was still at Baghdad's high court.

Iran’s main figures and entities stayed silent the first day of the change. This raised questions among allies and enemies, as the silence continued into the second day, Aug. 12.

It’s not only Maliki who paid the price of the failure in Iraq. Many others paid the price, including some well-known figures and others who remain invisible due to security measures.

During the weeks of talks, Iran’s secretary of national security, Adm. Ali Shamkhani, led the Iranian efforts on the ground. He visited Iraq on July 18 and met main leaders in Baghdad, Najaf and Erbil. Shamkhani was given a green light from Khamenei to try to end the crisis at any price. He was aware that the situation isn’t the same as before: Iran is no longer defending its regional security borders, but rather its direct borders; the Islamic State (IS) is now in Diyala, which borders Iran; and the last city that fell under IS control is Jalawla, less than 40 kilometers (25 miles) from the Iranian border.

In Tehran, the murmurs that Shamkhani will oversee the Iraq file have gotten louder. This is an indication that Iran is about to adopt a new policy, given Shamkhani’s historic relations with the Gulf countries and Iraq, his wide experience in dealing politically with regional conflicts and his closeness to Khamenei, all without ignoring the fact that he’s an Iranian of Arab origins.