The 50-day war in Gaza was about more than a confrontation between Iran and Israel and leaves all the current dynamics between Hamas, Qatar, Israel and Iran unchanged. 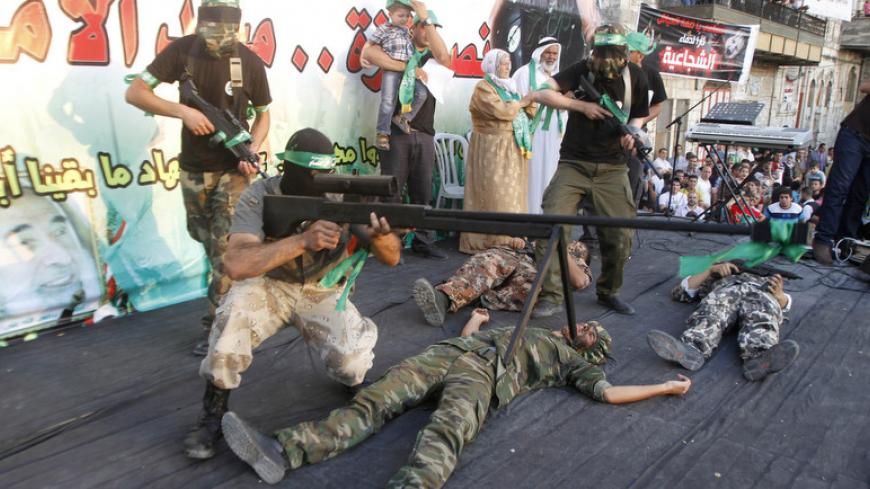 Palestinian Hamas supporters enact a scene simulating the killing of Israeli soldiers by Hamas militants during a rally celebrating what organizers say was a victory by Palestinians in Gaza over Israel following a cease-fire, in the West Bank city of Nablus, Aug. 29, 2014. - REUTERS/Abed Omar Qusini

The recent 50-day conflict between Israel and Hamas will not have much impact on tensions between Iran and Israel. At least not in the short term.

That is because the Middle East is going through a post-Arab Spring period.

Yes, during the Gaza-Israel conflict we saw major verbal attacks from senior figures such as Supreme Leader Ayatollah Ali Khamenei, who accused Israel of behaving like a "rabid dog." Meanwhile, President Hassan Rouhani called Israel a “child-killing regime” while accusing Israel of genocide. There were demonstrations and public letters of support from figures such as former Islamic Revolutionary Guard Corps Cmdr. Mohsen Rezai to commanders of the Hamas military brigade. The hard-line Iranian press was also hard at work. Numerous articles of support for Gazans and Hamas and a good dose of false propaganda were published. This included "news" that "15" Israeli soldiers had committed suicide rather than face the conflict in Gaza, or that the Tel Aviv stock exchange lost 90% of its value — none of which was true.

But this was all rhetoric. In the post-Arab Spring world, Iran has bigger worries than what happens to Hamas. The Iranians saw how Hamas, despite receiving $23 million a month from Iran for a number of years, suddenly turned its back on its allies Iran and Syria in the Syrian civil war. Iran no longer trusts Hamas as it used to. In fact, it's no longer Hamas' main weapons supplier. According to Israeli officials, the vast majority of weapons fired by Hamas in the latest war were made in Gaza by Hamas.

In the post-Arab Spring world, Iran also has bigger worries than Israel, including the severe problems its ally Bashar al-Assad is facing. The threat posed by the rise of the Islamic State (IS) terror organization in Iraq is far more deadly.

Things have also changed for Israel.

Weakening Hamas militarily in the recent Gaza war by destroying its tunnels and missiles won't tip the balance against Iran in Israel's favor. In today's post-Arab Spring world, Hamas is more associated with Qatar than Iran. Israel can strike Hamas as hard as it wants. It's not Tehran that will feel the pain but Qatar and, to a lesser extent, Hamas' other ally, Turkey.

Israeli attacks against Palestinian Islamic Jihad will hurt Iran because of the latter's close relations with Tehran. But since this organization is weaker than Hamas and the PLO in Gaza and the West Bank, hurting it won't noticeably tip the balance in Israel's favor.

Perhaps most importantly, Israel is facing off against Iran at the P5+1 nuclear talks. And that's indirectly. Countries supporting Israel — including the United States, France, the UK and Germany — are trying to ensure that Iran will not have the ability to make a bomb without being noticed, one of the reasons for this being Iran's past actions and rhetoric toward Israel. Whether Israel defeats Hamas in Gaza or not will not make much difference in the United States' and Europe's stance or bargaining power in the nuclear talks against Iran. Even if Hamas had done better, it's unlikely that the United States and Europe would have allowed Iran to use Hamas as a bargaining chip in the nuclear talks.

Israel also has newer and bigger worries than Iran in the region, including the rise of extremist movements in Syria like al-Qaeda-affiliated Jabhat al-Nusra, which now sits on Israel's border with Syria. Israel is also very worried about the rise of IS in Syria and Iraq.

What about the long-term future?

In the Middle East, things change. There is always the possibility that Iran and Hamas could patch things up.

Although possible, it certainly won't be easy to pull Hamas away from Qatar.

More importantly, it's unlikely that Hamas will be able and willing to leave Qatar for Iran. The Qataris have far deeper pockets than Iran. Unlike Iran, Qatar enjoys good relations with the West. At the same time, the Qataris won't like an Iranian-Hamas rapprochement, as they are suspicious of Iran. They just ordered $11 billion worth of weapons from the United States partly because of their fear of Iran.

The Middle East is changing, and along with it, the arenas where Iran and Israel face off. Gaza is slowly losing its importance as one such arena.