Iran and Hezbollah delay their response in support of the Palestinian resistance. 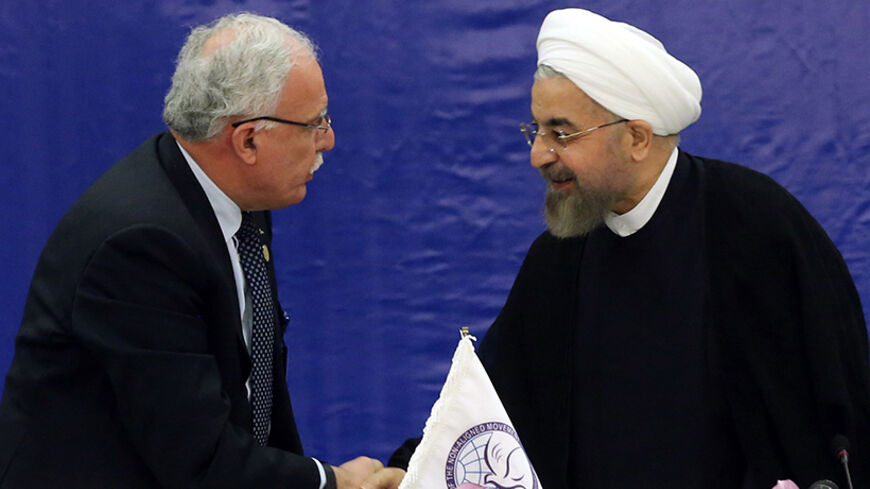 For the first 16 days of the war, both the “resistance bloc” and Iran’s rhetoric toward what was happening in the Gaza Strip was surprising. Until July 19, Tehran’s reaction was colder than usual; no significant solidarity was witnessed in the streets, nor did officials voice their usual support to the Palestinian groups fighting Israel. The same applies to Lebanon’s Hezbollah that used to be much more involved in similar situations previously. It was only Ali Larijani, Iran’s parliament speaker, who on July 17 called both Hamas’ leader Khaled Meshaal and Ramadan Abdullah Shalah, Islamic Jihad’s secretary-general, to voice his country’s stance to support the Palestinian resistance in the war.

On July 20, a drastic change occurred. Meshaal and Shalah received another phone call, this time from Hezbollah's Secretary-General Hassan Nasrallah who indicated that the “resistance bloc” was about to start its solidarity campaign with Gaza. According to a press release by the party, Nasrallah expressed support to both groups and to the Palestinian people, as recounted by Al-Monitor’s Nasser Chararah. Since then, the support increased and reached its peak with Supreme Leader Ayatollah Ali Khamenei's speech on Eid al-Fitr and a few days later the letter by Quds Force leader Qassem Suleimani that was aired by the Beirut-based Al-Mayadeen TV.

“It was a bit surprising,” said one Hamas official in an interview with Al-Monitor, “there are no doubt many differences on other issues, but we expected a warmer approach from Iran; all these years they’ve been supporting the resistance, we expected a louder voice at the start [of the crisis in Gaza].” The Hamas official, who spoke on condition of anonymity, explained that the Iranian role in supporting the resistance militarily continues to be invaluable and cannot be compared to any other support: “[In terms of] training and expertise, the Iranian leadership has been very supportive. This is not something to argue about, but they weren’t there as before. We hope this new wave of support that they started 10 days ago will continue because we need every word; though we understand they might have been busy with the nuclear talks that are a priority to President [Hassan] Rouhani’s administration.”

Why did Iran at first remain silent, and why did its rhetoric change two weeks later?

There are many answers to these questions, though an official Iranian source explained to Al-Monitor that his country did not want to add pressure on the Palestinian resistance. “What Iran really cares for is to see the Palestinians reach their goals; our country has been for decades committed to the Palestinians cause,” the official said. “Everyone, or at least those whom it may concern, is aware of our contribution to the Palestinians, but we thought that making ourselves scarce will help the Palestinians gain more with respect to any possible deal. When we realized that nothing is going to change, we decided to jump back at the forefront — this is one issue.”

According to the official, the second reason is that Iran wants people to distinguish, without being influenced, the difference between radical groups fighting in Syria and Iraq and the resistance groups that fight against Israel. “[IS] and those fighting and slaughtering Muslims and Christians have no mandate but to split the Islamic ummah [nation]. They don’t care for Palestine and people who are being killed there; they aren’t ready to shoot a bullet at Israel,” he said, adding, “Even some countries that back the militants in Syria and Iraq, they are today standing by Israel — literally. They are encouraging Israel to destroy Gaza; moreover, they are exerting additional pressure on Egypt to keep the borders closed. We wanted people to see the picture as it is.”

For years, Israel and the United States accused Iran of backing the Palestinian resistance and providing them with arms and cash. Iran never denied these claims, yet since Rouhani assumed office the rhetoric has changed. “Everyone has his style,” the Iranian official said, “Ahmadinejad was blatant in his support, while President Rouhani prefers calmness. Israel knows well who's Iran in this region, and they know well that we’re the only country in the region that stands firm behind the Palestinians and [that we are] always ready to sacrifice for it. The leader’s speech was clear, and I call on everyone to read it once again to understand Iran’s policy.”

In his speech, Khamenei called on the countries of the region to arm the Palestinians. He said, “Our clear message to Islamic governments is this: Let’s help the oppressed rise and show that the Islamic world will not be calm in the face of oppression. To realize this goal, all Islamic governments, irrespective of their political and nonpolitical differences, [must] accelerate help to the oppressed.”