In an exclusive interview with Al-Monitor, Palestinian Islamic Jihad leader Ramadan Abdullah Shalah said, “Our performance from one war to another is getting better. If in 2012 we hit Tel Aviv, I think the enemy can imagine what can be beyond Tel Aviv.” 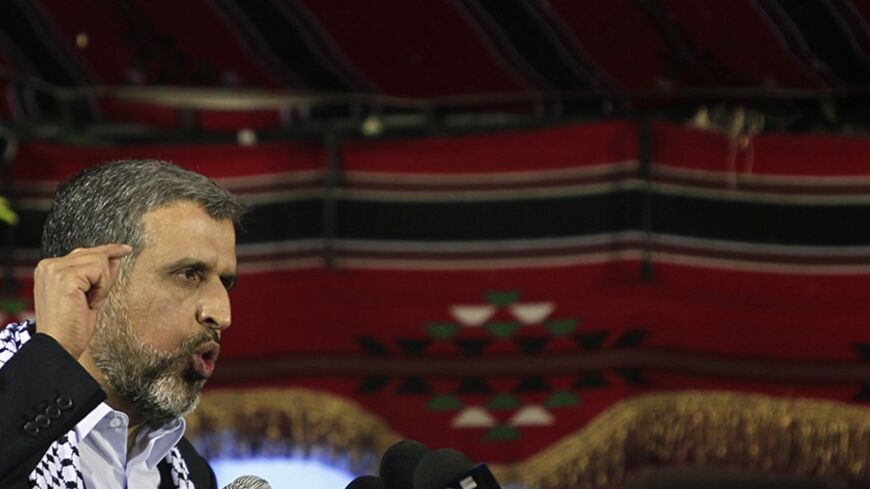 Ramadan Abdullah Shalah, head of the Palestinian Islamic Jihad, delivers a speech during a rally to mark the 23rd anniversary of the group's founding held at a Palestinian refugee camp near Damascus, Nov. 5, 2010. - REUTERS/Khaled al Hariri

TEHRAN, Iran — Amid the sprawl of the Iranian capital, I met one of the most wanted men in the world, a man with a $5 million bounty on his head — Palestinian Islamic Jihad leader Ramadan Abdullah Shalah.

As we met, Shalah's organization was reviving a cease-fire with Israel, thanks to Egyptian mediation, less than 24 hours after the most recent storms of war struck the Gaza Strip. Tensions erupted March 11 when an Israeli airstrike killed three Palestinians in the southern city of Khan Yunis. Islamic Jihad and other armed Palestinian factions retaliated by launching 130 rockets across the border in the most intense confrontation since the November 2012 war, which also ended with an Egypt-brokered truce.

I asked Shalah about the restored truce and whether it had been coordinated with Hamas. The UK-educated jihadist said that his group had been contacted by the Egyptians, who offered to mediate.

"We told them we are committed to the last truce as far as the Israelis are committed, so it's as much restoring the last truce as signing a new one," said Shalah. He elaborated, "During the past two years we were committed to the truce, but the Israeli occupation continued to break it. The Palestinian factions observed during these years maximum restraint, but after the last attack by Israel, we felt that they are miscalculating our response. Israel might have started thinking that we're afraid or that all the equations set during the previous wars are void due to the situation in the region. We wanted to tell the enemy and the friend not to misunderstand us. It's true that we signed a truce in 2012 — a truce, not a surrender document."

"Was this coordinated with Hamas?" I asked, citing a Hamas official who claimed to know nothing about the truce. Shalah responded, "Maybe there was a delay, but all that we do is coordinated." He further explained, "We both coordinate all our moves together, in war and peace. I'll reveal something: Just days ago, I was the guest [in Qatar] of Abu al-Walid [Khaled Meshaal], and we held very detailed meetings to discuss almost everything, but mainly the resistance and the situation in Gaza, so whoever says there's no coordination knows nothing. We agreed together on retaliating if there's any attack."

More of the interview follows:

Al-Monitor:  In the November 2012 war, Palestinian rockets struck Tel Aviv, which was then a game changer. Should this war continue, are you going to strike Tel Aviv again?

Shalah:  Our experience proves that our performance from one war to another is getting better. If in 2012 we hit Tel Aviv, I think the enemy can imagine what could be beyond Tel Aviv.

Al-Monitor:  Some suggest this last escalation was requested by your regional partners.

Shalah:  It's a shame to hear that some people think this way. Who started the war? Israel started the war. Unfortunately, our war with Israel is becoming more and more limited to Gaza. There's an occupied Palestine that we have to liberate, and we won't give up this objective. We always take this into consideration, but we do act in accordance with the circumstances in the region and our capabilities. Our resistance will continue as far as there is Israel, as far as there is occupation, the daily aggression against our people. Let me make it clear: Our arms are only for Palestine. Our arms aren't for rent. We will continue until we see the Dome of the Rock, Jaffa and Haifa.

Al-Monitor:  Why don't you accept taking the path of negotiation?

Shalah:  Because those who chose the negotiation path gained nothing. We all lost because of them. When the Oslo agreement was signed, there were 180,000 Israeli settlers. After Oslo, we have around 560,000. The West Bank today is full of settlements, Israeli checkpoints. [There are] detentions. Jerusalem is also suffering, especially with the Judaization process that saw many of its indigenous people thrown out of the city. Unfortunately, the Palestinian Authority [PA], in response, is banning the resistance, though there's great potential, and our people are ready to rise up once again. Why are they committed to security coordination with Israel? What does security coordination mean? It means that the PA is working for Israel.

Al-Monitor:  In Israel there is a campaign to declare Israel a Jewish state. What's your take on this?

Shalah:  Declaring Israel a Jewish state means that they are the owners of the land and that for 1,400 years we were wrong, that we historically are invaders not only as Arabs but also Canaanites. It means that all our wars were baseless. Even our martyrs — [late Palestinian leader] Yasser Arafat, [Hamas co-founder] Ahmad Yassin, [Palestinian Islamic Jihad founder] Fathi Shaqaqi — would all be criminals and not freedom fighters. If we make such a compromise, we will soon see 1.5 million Palestinians in occupied Palestine crossing the river to Jordan. This will be the first step toward dividing the whole region into tiny sectarian states. For decades, we criticized and attacked the Sykes-Picot Agreement. If this happens, then we'll write poetry in praise of Sykes-Picot. Syria is a clear example.

Al-Monitor:  For years before the Syrian crisis, you lived in Syria. Do you have any thoughts on the situation there and whether there's any solution to the bloodshed?

Shalah:  Unfortunately, after three years no one is happy with the bloodshed. I think it's obvious that all parties on the ground are quite certain a military solution is impossible. The only possible thing today is hopeless bloodshed. If the war continues this way, it might continue for another 100 years. This happened before in Europe between England and France. They fought for 116 years. It might happen here, too. Many other sectarian and religious wars lasted for hundreds of years. There's no solution for Syria but politics, and here, everyone should be represented. I call on those asking [Palestinian] President Mahmoud Abbas to make painful compromises to Israel, why don't you make some painful compromises and rid the Syrian people of this war?