Hezbollah calls for resistance against IS

Hezbollah sources told Al-Monitor that the Islamic State’s attack on Arsal was only the beginning of another series of attacks in parts of Lebanon. 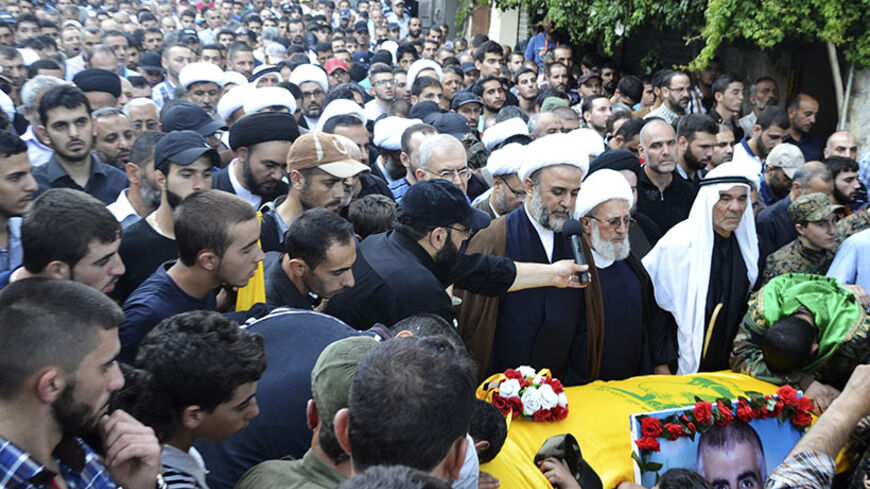 Lebanon's senior Hezbollah official, Sheikh Nabil Qawouq, leads prayers around the coffin of Ibrahim al-Haj, a Hezbollah commander who died during a mission in Iraq, in Mashghara village in the Bekaa Valley, July 30, 2014. - REUTERS/Shawky Haj

Hezbollah’s military predictions, according to internal Hezbollah sources who wish to remain anonymous, indicate two areas in Lebanon likely to be the next battlefields of the expected war with the Islamic State (IS).

The first is in the northern Bekaa Valley and includes a vast area of barren land with rugged tracts, extending from the desolate area of the Lebanese Sunni town of Arsal, running south to the arid lands around the Shiite city of Baalbek and back into Syrian territory. On a parallel line to the area, there are seven Shiite towns — al-Nabi Othman, Al-Ain, Labwe, Nahla, Younnine, Maqneh and Nabi Chit, the most prominent of which is the village of Labwe, neighboring Arsal.

The second expected battlefield is also in north Lebanon, which includes Tripoli and its surrounding cities, as well as the Bekaa Valley.

It's possible that the first flame of this war in Lebanon might break out when IS fighters leave their positions. At the exit of the Bekaa Valley, there is an area suitable for IS’ potential project: the Lebanese Shiite city of Hermel, one of Hezbollah’s strongholds, and the north Lebanese regions of Akkar and Donnieh. These areas have a high density of poor Sunni communities where conditions are favorable as an incubator for IS.

IS’ potential objective in attacking this area would be to set up an emirate in north Lebanon within the Sunni population. Moreover, the port area in the capital of north Lebanon, Tripoli, which opens onto the Mediterranean Sea, will have the same function for IS as the city of Misrata for Ansar al-Sharia in Libya — to smuggle and receive weapons for radical Islamist groups. Misrata became a weapons store for many extremist groups.

According to the same sources within Hezbollah and official security circles, the IS attack that took place this month on the town of Arsal, from the barren lands (of Jroud Arsal, between Lebanon and Syria) is not the end of IS’ war on Lebanon, but rather the beginning. This estimate was endorsed by information from the IS emir in the barren lands of Arsal, Abu Ahmed Gomaa, who was arrested by the Lebanese armed forces.

Another Hezbollah source told Al-Monitor, “Hezbollah learned in advance that IS intends to cross their posts in the barren lands to conduct attacks on seven Shiite villages in northern Bekaa. For this reason, a few days prior to the events in Arsal, [Hezbollah] carried out military maneuvers simulating the [potential] battle to repel IS from these villages. The main objective of this maneuver, which Hezbollah intended that the people in the area see how effective it is, is to deliver a message to extremists that Hezbollah is aware of their intention.”

It seems that delivering warning messages to IS on the ground in the area has become a policy adopted by Hezbollah. Over the past week, Hezbollah invited a Lebanese satellite channel to its military sites facing IS positions in the barrens of Arsal and allowed the station to broadcast its preparations to counter any potential attack by IS.

The sources close to Hezbollah told Al-Monitor that nearly two years ago Hezbollah opened training camps in the area outside the city of Baalbek in the Bekaa Valley, close to the Syrian border, to train youth from different denominations in preparation to face radicals, and although the highest percentage of the trainees in these camps are Shiites, the recent acts by IS against the Christians of Syria and Iraq have pushed dozens of young Christians hailing from the towns adjacent to the Syrian border to join them. Today, these Christian youth represent a form of "people’s protection committees" in their hometowns similar to those formed by Christian youth in Syrian towns.

The Hezbollah sources said, "There is a high level of coordination between these committees, which are expanding, and Hezbollah’s military apparatus, called the Lebanese Resistance Brigades, which is independent from the resistance body tasked with fighting Israel."

With the growing expectation that IS is coming to Lebanon, Hezbollah’s military preparations have evolved toward promoting a plan to establish the Lebanese Resistance Brigades, which gather all denominations, to face IS. Steadily, this plan has started to be accepted by youth from other denominations, particularly the Christians of the north and the Bekaa Valley.

A Christian youth explained why he joined the local protection committee: “What has happened in Mosul has been a message to all Christians of the East that the world will not protect them and that they need to rely on themselves to defend their existence.”

The same Hezbollah source said Hezbollah’s idea to establish the Lebanese Resistance Brigades dates back to the 1990s: “Its objective was initially to make the resistance against Israel a national resistance, not just a Shiite resistance,” the source said. “Yet, its implementation back then was constrained by several obstacles, which resulted in the idea of ​the Resistance Brigades as a militia affiliated with Hezbollah and tasked with countering internal military dangers.”

Today, the idea is being developed as Hezbollah needs to counter an expected war by IS in Lebanon. The new development is succeeding by establishing it in environments where there are existential concerns among Christians in areas close to IS and Jabhat al-Nusra positions at the Syrian border. Hezbollah has actually succeeded in establishing “people’s protection committees” that consist of dozens of Christians from the northern Bekaa towns.

The Hezbollah source said, “The same issue that has faced the Alawites in Syria, with the start of the internal war, is now facing Hezbollah in Lebanon. It says that in parallel to the significant human reservoir that provides IS with fighters from all over the world, Hezbollah’s ability to provide martyrs to face [these fighters] remains limited.

“Lebanon’s Shiites, which represent the party’s main human support, are ultimately a minority of limited numbers compared to the large number of Sunnis. While Hezbollah cannot supply the fighting, which may go on for months and probably years, with martyrs on a daily basis, radical groups are able to compensate for the death toll among their ranks no matter how long the war drags on. Starting from now, Hezbollah is seeking to resolve this dilemma through many means, including creating what looks like a resistance that consists of several denominations against IS.”