Without Hamas, Israelis and Palestinians can find peace

It was terrorist attacks by Hamas from the 1990s until today that ruined any chance of reconciliation with Israel. Thus, only when the Palestinian people come out against Hamas will it be possible to talk about peace. 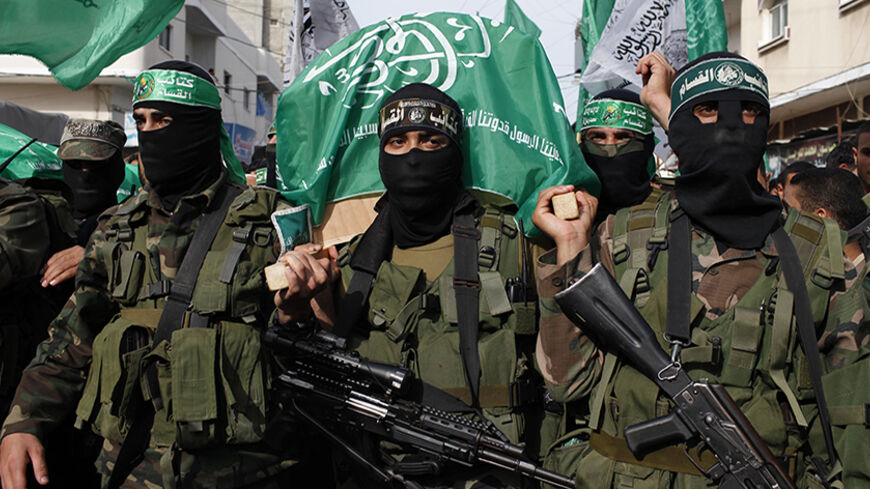 Palestinian Hamas militants carry a coffin containing the body of their comrade Rami Meshmish during his funeral in the central Gaza Strip, April 16, 2014. - REUTERS/Ibraheem Abu Mustafa

Now that they have finished burying their dead, fighting for the lives of the injured and discovering the vast scale of property damage, the citizens of this war in the Gaza Strip — or rather, its victims — are trying to return to their lives. It takes a lot of inner strength. The sense of desperation must be repressed. The fear and the horror that war inevitably brings need to be overcome. The wounded will recover, the homes will be rebuilt and sooner or later, life will return to normal. But the hatred … it will seethe and grow. It will rise from the fresh graves and crowded hospital corridors. It will emerge from beneath the ruins. And with it will come the desire for revenge, as it always does.

Brig. Gen. Ilan Paz, former deputy commander of the Israel Defense Forces (IDF) Flotilla 13 commando unit, wrote a very insightful article about the implications of Operation Protective Edge, which appeared on the website of the Molad Research Institute. In it he said, “We have turned tens of thousands of Gazans into potential terrorists, thirsting for blood after losing their innocent relatives or their homes and property. Using pressure to leverage the population has never provided the anticipated results. … The method is immoral. … There is not, nor can there be, any justification for attacks on this scale.”

Israel responded with enormous force to the heavy barrage of rocket fire on its civilian population. According to figures provided by the United Nations, more than 1,900 people were killed during a single month of fighting in Gaza. Al-Monitor’s correspondent in Gaza, Asmaa al-Ghoul, wrote a heart-wrenching account about nine members of her family who were killed in the war in Gaza. She was adamant when she declared, “Never ask me about peace again.”

There was a chance for peace not too long ago. It was more than just a chance, too. Who doesn’t remember the reserved but historic handshake between late Prime Minister Yitzhak Rabin and late Palestinian Liberation Organization (PLO) leader Yasser Arafat on the White House lawn? On the night that it happened, Sept. 13, 1993, I was a young reporter in Gaza. It was the first time ever that I was covering the celebrations in the city, which had been at the forefront of the first intifada. The whole city took to the streets for the night, rejoicing in the promise of independence, freedom and hope. It was the first night without a curfew in a very long time.

I met Ihab al-Ashkar a few weeks later. As the supreme commander of the first intifada, he was a Fatah supporter with every fiber of his being. Then, one day, he put down his weapons and organized the celebrations to mark the end of the war. The celebration was centered on Gaza’s Umar al-Mukhtar Street. Until then, it was illegal to display the Palestinian flag, but that night hundreds of flags festooned the street. But the celebration was premature. The Palestinian state was never established. The promise was never kept.

One day after the celebration voices died down, Hamas embarked on a series of knife attacks on the streets of Israel. These attacks had just one target. They were intended to obliterate the peace agreement that Israel had just signed with the PLO. Over the years, the knives were replaced with suicide bombers. I will never forget the moment I heard about the first suicide bomber, who blew himself up on the Number 5 bus on Dizengoff Street in Tel Aviv, on Oct. 19, 1994. The attack left 22 people dead and dozens more wounded. It was the first time, but hardly the last, that an Israeli bus blew up with all its passengers on board, right in the heart of a bustling metropolis in Israel.

What kind of peace encourages the emergence of terrorists who blow themselves up to kill men, women and children so indiscriminately? And for what? What was the reason to do that? Was it because Hamas felt that it was left off the map of Palestinian politics? Was it because they got shunted off to the opposition?

It was a slow but steady and ultimately deadly process, but in the end Hamas succeeded in undermining Israelis’ hope that peace with the Palestinians would bring them security. Rabin coined the term “victims of peace” to describe the people killed and wounded in Palestinian terrorist attacks. He insisted on saying, “We will fight terrorism as if there is no peace, and we will continue along the path to peace as if there is no terrorism.” But with every terrorist attack the Israeli public grew less and less willing to accept Rabin’s approach, and rightfully so. The victims of Hamas and Islamic Jihad were not the victims of peace. They were the victims of madness incarnate, of a movement that was doing whatever it could to destroy the Oslo Accord. Palestinians also paid a steep price for the struggles of these terrorist groups. Each attack closed another crossing between Israel and the occupied territories. Each attack established another checkpoint.

Then Rabin was assassinated and the peace we all longed for died with him. The death rattle lasted for several more years, but when the second intifada erupted in October 2000, Hamas was at the forefront of the violence once again with its most potent weapon. Hundreds of suicide bombers girded their explosive belts and set out to kill Israelis. Along the way they blew up whatever remained of the peace camp.

Ihab al-Ashkar was and still is a man in pursuit of peace. He used to tell me with the utmost confidence, “Hamas doesn’t launch these attacks for the sole purpose of hurting you. The main reason they do it is to hurt us.” This infuriated me. “Israeli civilians were murdered, and you people in Fatah let them kill the only chance we had with your own hands.”

And Hamas succeeded, too. In 2006, it won the elections in the Palestinian Authority, the very entity created on the basis of an agreement that Hamas fought so hard to destroy. Ismail Haniyeh became the first Hamas prime minister. The movement promised its voters “change and reform,” and the electorate believed it and hoped for it. Or at least they hope that was what they would get. When a situation is as bad as it was, every pledge seems logical, every promise seems possible to the soul-searching for a modicum of hope, even if common sense screams that it is a false promise. But even if there was the slightest chance of improving the situation, that disintegrated with the abduction of an Israeli soldier, Gilad Shalit, by Hamas, less than half a year after the elections of June 2006. The monster had risen against its makers. Armed Hamas militants destroyed any chance that the movement had to improve the lot of the Palestinians.

The organization’s armed militants were also responsible for the military coup in Gaza on June 14, 2007. By then, they no longer needed to attack Israelis to wreak their revenge on Fatah and its supporters. They shot them in the back and in the kneecaps instead, and threw them off the roofs of the city’s tallest buildings. With that, they seized control of the Gaza Strip and assumed responsibility for the 1.5 million people who lived there. Hamas insisted on using force in its attempt to prove that it was capable of sustaining Gaza, but its actions actually brought disaster on Gaza residents instead. Seven years have passed since then, and we have seen blood, we have seen sweat and we have seen plenty of tears. It has been seven years of hatred, violence and privation. For seven years, the people of Gaza have lived without hope for a brighter future.

The proper response to anyone who claims that Hamas fought Israel throughout all these years just to get the siege of Gaza lifted is: It brought this siege on its own people, on the day that it launched its violent coup.

Bassem Eid of East Jerusalem is a researcher for the B’Tselem human rights organization, who has spent the past 26 years toiling staunchly on behalf of the organization. In an anguished note to his people this week, he wrote, “Hamas has never been interested in liberating the Palestinian people from occupation.” But then he added, “And Israel will never be able to destroy the Hamas infrastructure. Only we, the Palestinian people, can dismantle it.” Only then can we go back to talking about peace. Maybe.