Arafat Destroyed the Dream of Oslo For Palestinians

In 1993, Gaza and the West Bank wanted to establish a democratic state through the Oslo Accords, while Tunis PLO officials imposed the old Arab regimes' model. 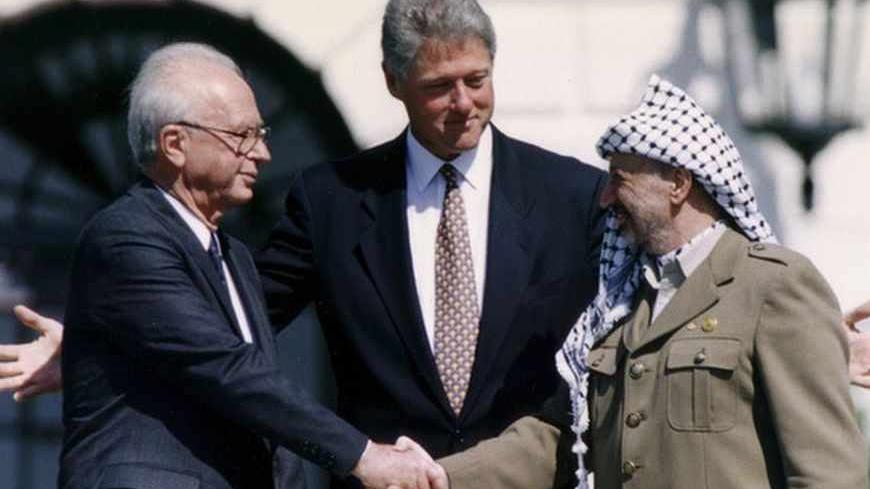 It happened at 5 p.m., exactly 20 years ago today, on Sept. 13, 1993. The Oslo Accords were signed on the White House lawn. Then-Israeli Prime Minister Yitzhak Rabin, Foreign Minister Shimon Peres, Palestine Liberation Organization (PLO) leader Yasser Arafat, PLO official Mahmoud Abbas and US President Bill Clinton stood on the red carpet and shook hands. One member of Fatah, Ihab al-Ashkar, assumed the responsibility of getting all the residents of Gaza out of their houses so that they could celebrate the new era, the "era of peace." He raised money from local businessmen in Gaza and organized workshops to sew Palestinian flags for everyone to decorate their homes.

The people of Gaza had long been forced to be home by 8 p.m. sharp for curfew and remain there until dawn, but that day they received permission to celebrate all night. Ashkar was pleased. Once a member of the first intifada’s high command, he told everyone who would listen that at that very moment he was putting down his arms and living his dream. But not everyone acted the same way. Many people had a different dream. He quickly discovered that others would try to rob the state in the making from him and his friends. They wanted to establish a different kind of state, based on very different foundations.

At the time, most local Fatah members were part of the intifada’s high command. When they were arrested by the Israel Defense Forces, they were sent to prison. They were all kept for various lengths of time in Israeli jails. It was there that they were first exposed to the Israeli experience, Israeli culture and democracy, which became the basis upon which they wanted to establish their own state. It was in Israeli prisons, of all places that the seeds of the Oslo Accords were first sown.

Ashkar’s story tells a lot about the rise and fall of the Oslo Accords, which began as a promise for better days in the Middle East, but which eventually made this bloody conflict all the more severe. That is not to say that the accords were the wrong move to make. On the other hand, anyone who compared the accords to a sieve full of holes was right. The agreement had many weak points, which were never resolved and ultimately enabled its many opponents to destroy it.

But Ashkar's story exemplifies another aspect of the failure of the Oslo Accords, one which few people have discussed. It is an example of the rickety and corrupt foundations upon which the Palestinian Authority (PA) was built. In the spring of 1994, almost a year after the accords were signed, Arafat and his people arrived in the West Bank and Gaza from Tunisia. Their vision of the character and nature of the state that was to be created at the end of the process was very different from that of the local population. The local population envisioned the establishment of a democratic state, while the state that the PLO members from Tunis wanted to create was to be modeled after other Arab regimes, with an omnipotent leader surrounded by a group of lackeys, who would benefit from his power. That was the regime they succeeded in creating.

A few months after the Oslo Accords were signed, Ashkar and other Fatah activists paid their first visit to Arafat in exile. “I arrived in Tunisia,” Ashkar once told me, “and I immediately went out to enjoy myself. Do you know what it’s like to go out and see for the first time in your life people dancing and having a good time? I did that until 3 a.m., and then I went back to the hotel, but I couldn’t find any of my friends from Gaza there. I was told that they were taken for interrogation, so I left everything and rushed to Arafat’s office. I saw them sitting there all confused. ‘What are you doing?’ I asked them. ‘They brought us here,’ they told me. ‘And you came just like that, like children? Get up! No one’s interrogating anyone here.’”

It turned out that Arafat wanted to question the Gaza delegation about the murder there of Attorney Muhammad Abu Shaaban, a former Fatah activist, who was considered his personal friend. Arafat’s bodyguards grabbed Ashkar, too, and tossed him into a prison cell. Someone managed to call Gaza to tell people there about the extensive humiliation which happened in Tunisia.

Ashkar’s friend Tawfiq Abu Husa and other leaders who remained in Gaza called Arafat and told him bluntly, “You have three hours to release them. If they are not released from jail by then, we will gather all of Gaza in the streets to burn your pictures, while the whole world watches. Once that happens, you wouldn’t dare set foot in Gaza.” Arafat released the delegation, but the rift between the people in Tunisia and the local activists has not been resolved until this very day.

Once the people from Tunisia arrived in the West Bank and Gaza, the local population, and especially the activists, discovered the vast gulf that separated them from Arafat and his men, who considered themselves somehow superior and more privileged. The people who lived in the occupied territories fought in the intifada, sacrificed their lives to establish a Palestinian state and spent years in Israeli prisons, while the people in Tunisia lived a life of luxury. And now, the locals felt, they stole their emerging state from them as well.

The PA was established on shaky moral grounds. Corruption proliferated throughout the occupied territories, devouring all that was good. Instead of creating a government that acted on behalf of the public, most of the leadership from Tunisia was busy robbing the public coffers. Dazzling new mansions popped up, and shiny black Mercedes Benzes could be seen regularly in the overcrowded refugee camps. They paid the price for all that in the 2006 elections. Hamas defeated Fatah, not because of its religious ideology or that terrorist group’s desire to launch a jihad against Israel, but because the people of the West Bank and Gaza wanted to retaliate against everyone who came to establish a state but preferred to advance their own interests in the end.

Ashkar says that after his arrest in Tunisia, he reached a dramatic personal conclusion: The man who served on the first intifada's high command distanced himself from politics and became a successful businessman. He foresaw a gloomy future for the PA from the very first moment, since it was built on the model of most Arab regimes — the same model that young people in Egypt, Tunisia and other countries throughout the Middle East are now fighting to replace.