Al-Monitor’s Asmaa al-Ghoul visits the Gaza Strip border areas that were heavily bombed by Israeli forces, and finds families searching through the ruins of their homes. 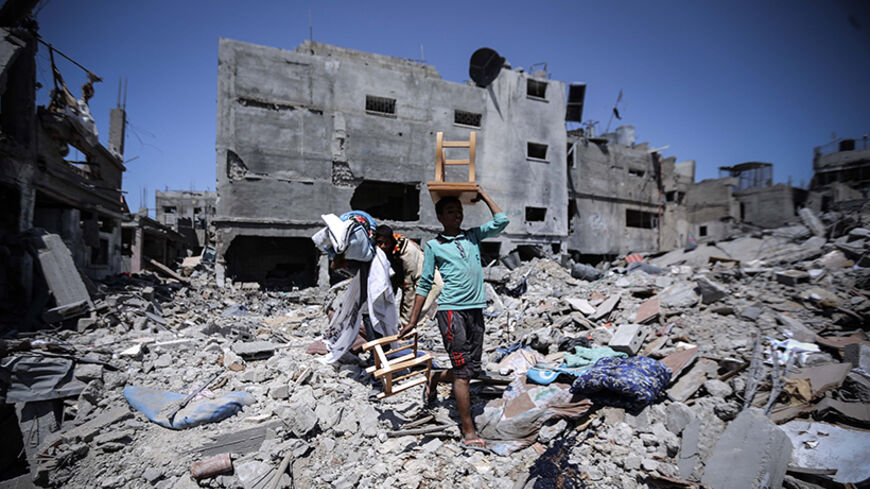 SHAAF, Gaza Strip — The calm that prevailed in the Gaza Strip during the three-day truce seemed like a strange guest, especially in the areas that had been battlefields only a few days earlier. People were seen walking on top of the ruins, now that the stench of death and the sounds of shelling have disappeared. The eastern border — which Al-Monitor visited on the first day of the truce on Aug. 11 — appeared calm, like a golden horizon, whereas previously just approaching it meant suicide.

With the danger in those areas having subsided, the displacement and suffering of families that came to inspect their homes becomes apparent. Some of these families had never been refugees before, as was the case with the Kafarna family, which resides on Abu Aouda Street in the city of Beit Hanoun. Here, the meaning of the phrase "the killing of beauty" applies. This city, which was full of trees and low-rise buildings, now resembles an abandoned construction site.

Dalal Kafarna sits on the doorstep of her home, the only thing left that was not hit by shelling. "We came back this morning to inspect the house. Look at it. … I have lived through many wars in my life, including the 1956, 1967, 2008 and 2012 wars. Never before has my family experienced what they experienced in this war. They bombed our house and scared us, and our relatives were killed," she told Al-Monitor.

The few meters to the entrance of Dalal's home is a challenge because of the debris of stones, pieces of glass and iron.

"All our hard work has gone. My children are still paying the loans they took out to build this four-story house," she said, noting that when she saw it during the first truce she was deeply shocked.

There is a single tree on the street that Dalal's eldest son, Iskandar Kafarna, used to determine the location of their house. "The first time I came here [following the truce], I wasn't able to find the house, but thanks to this tree I recognized what was left of it," he said.

Every few meters, large holes in the piles of rubble indicate where a bomb had fallen. Iskandar's cousin Ayman Kafarna, whose home was also destroyed, said, "The planes [dropped] explosive barrel bombs on our home. This was the first time I had seen them in my life. I had only heard about them via the news on Syria."

It seems that these barrel bombs are capable of destroying entire neighborhoods, as they carry tons of explosives. Ayman continues, gesturing with his hand, "On Abu Aouda Street, I saw about four holes. Each hole contained one of the barrel bombs that led to this huge destruction."

The Kafarna family discovered that their homes had been bombed during the first truce, which lasted three days and began on Aug. 5. Iskandar's wife, Aida, told Al-Monitor, "We came during the first cease-fire for 12 hours, and at that time the house was still standing and we felt some consolation. But when we came afterward, we found everything destroyed."

"At that time, I wasn't able to enter the street without covering my nose because of the stench of the bodies. Now we have taken refuge along with our children at a school. We only wear the clothes we brought, and we have contracted diseases and infections there," she said.

According to Iskandar and his cousin, the bodies of 11 people in uniforms typically worn by resistance fighters were under the rubble of their homes; they were removed under the supervision of the local authorities.

The Kafarna family fled their homes in the second week of the war, on July 16, following the intensification of the Israeli bombardment. They left their homes empty after bolting them shut, fleeing to an UNRWA school. However, the school was shelled by Israeli tanks on July 24, causing the family to leave Beit Hanoun.

Unlike the women who sat at the entrances to their destroyed homes, the men lay under tents made of blankets in front of the ruins, as if waiting to return to their homes.

From the Beit Hanoun region, the car I travel in descends along the eastern line to the Shaaf neighborhood, at Gaza's eastern border with Israel. The impact of the destruction becomes more evident here, with burned-out buildings and factories such as a juice factory and Al-Wadiah factory. Eventually, the car reaches Al-Wafa Hospital, which has become nothing more than three huge piles of rubble. The only thing emerging from the ruins is a sign with the hospital's name. As some of the workers try to save specialized devices used for treating people with special needs, two hospital guards are preparing tea on a fire made with wood from the trees of the hospital's destroyed garden.

One of the guards, Abu Salam Mushtahi, told Al-Monitor, "The hospital staff insisted on staying until the second week of the war, despite the army's threats of bombardment. We didn't leave until they started bombing the newest building, which is the hospital's third building." He indicated that there were foreigners staying with them in solidarity at the time, but they couldn't handle the intensity of the bombing and left.

"We carried the elderly and the sick using blankets in the midst of the bombing. There were about 100 of them in total. We moved them using two ambulances and one private car belonging to the hospital, and we went back and forth about 10 times until we made sure everyone was secure in the Sahaba Medical Center," he said.

The residential buildings surrounding the hospital appear on the verge of collapse, due to the successive tank shelling they were subjected to. One of the residents, Omar al-Khaisi, and his two cousins returned to their burned-out homes. "We will spend the night here if they don't bomb it. And if the war ends, we will return to our homes and erect tents beside them," he told Al-Monitor.

"I came today to retrieve some of the clothes for my family, who are now displaced in schools, and to search for our photo albums. However, I saw that everything has been burned by the shells," he said.

Not far away, on the border and behind the hospital in the Shaaf neighborhood, the homes look like gray structures that have been randomly eaten away by an army of mice, caused instead by tank shells.

The owners of these homes returned en masse to inspect them. Some have erected tents in front of the destroyed buildings, others sit on the sofas and chairs they found inside the rooms that are now exposed to the public eye. One can see drawings of hearts and Mickey Mouse on some of the internal walls.

Al-Monitor spoke with Fatima Afaneh, as she leaned against a wall. "Today, we not only discovered the destruction, but we also saw what was left behind by the occupation soldiers. They defecated in the flour bag that I used to bake for my family. They also left empty food packaging with Hebrew labels," she said.

While everyone seems to be cooperative with the press and visitors, the bewilderment on their faces is visible. Everyone wants to know when their homes will be rebuilt, and this seems to be the most important issue right now.

"The home is the same as the soul," Dalal said through her tears.