The cost of Egypt’s ambitious project to build a parallel canal at the Suez Canal is expected to skyrocket, raising questions about the immediate financial return to the Egyptian economy. 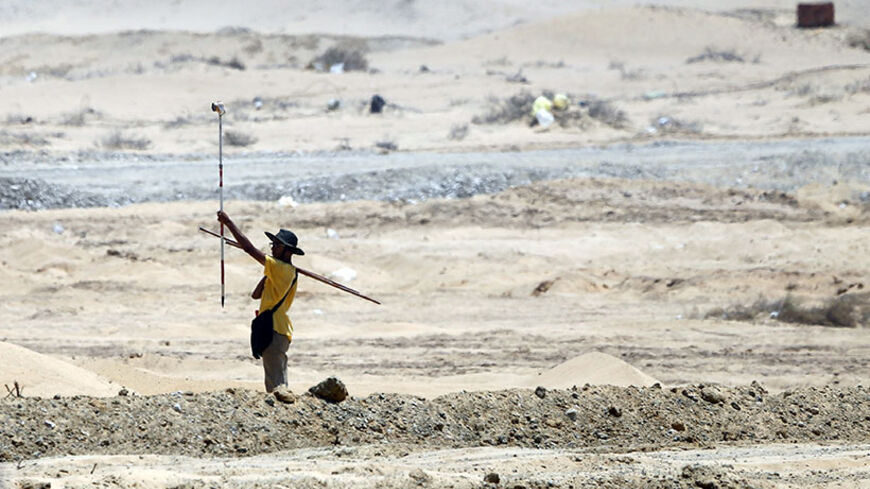 An Egyptian engineer works at the site of an upgrading project on the Suez Canal in Ismailia, northeast of Cairo, Aug. 12, 2014. - REUTERS/Amr Abdallah Dalsh

CAIRO, Egypt — Egyptian President Abdel Fattah al-Sisi has announced an ambitious project to dig a new canal parallel to the Suez Canal to develop and stimulate international maritime traffic through the area. Questions have been raised, however, about the Egyptian government’s ability to complete the job in only one year, as well as the economic feasibility of the project, since the state has been suffering for three years from a financial and economic crisis affecting all state institutions and sectors.

The new canal, which Sisi announced during a ceremony held Aug. 5 and assigned to the armed forces, is expected to be 72 kilometers (44.7 miles) long, and the project will involve 35 kilometers (21.7 miles) of dry digging and 37 kilometers (23 miles) of expansion and deep digging. The estimated cost is $4 billion under the purview of the Suez Canal Corridor Development Project. The government is depending heavily on the project to jump-start Egypt's sagging economy.

The first challenges of this massive undertaking have already appeared, namely, problems during drilling. In particular, water was found at the drilling sites, which may require a greater financial input for dredging. This issue is compounded by the presidentially declared one-year deadline to complete the drilling and send the first vessel through the new canal.

Haitham Awad, an engineering professor at Alexandria University, told Al-Monitor that costs are likely to skyrocket: “The cost of drilling underwater will exceed 10 times the cost of drilling in dry lands. The drilling site chosen was 400 meters from the Suez Canal, but it would have been better to choose a site between 8 and 10 kilometers (5 to 6.2 miles) away from the old canal.”

The armed forces are executing the drilling stage at an accelerated pace. “Twelve million cubic meters were drilled as of Aug. 19, just 14 days after the start of the works,” according to an Aug. 19 statement by Kamel al-Waziri, chief of the Engineering Authority of the Armed Forces, during a visit by the Egyptian prime minister to the project site, where Al-Monitor was also in attendance.

The Egyptian army has expressed its commitment to finishing the project within a year under Sisi's directive. According to the army, this commitment is materializing on the ground with the supply of nearly 4,500 pieces of heavy equipment, including, of course, tools for digging and dredging and loaders. Agreements were concluded with 50 Egyptian companies to immediately begin the excavation work, and the engineering team from the armed forces was assigned to the drilling operations and to be on the lookout for remnants of past wars in the canal area.

The general aim is to dig 1 million cubic meters of the new canal area per day. At this rate, the armed forces expect to finish within the next 11 months. The 12th month would be a trial run of a vessel in the navigational stream.

The government is touting the economic benefits of the project, but the high expectations of fast revenues may not be achievable in the near future, raising a number of questions about the Egyptian economy’s capacity to assume the current risk.

A strong media campaign promises Egyptians an economic boom through the mere execution of the project, but economists are doubting the project’s return to the economy. “I cannot confirm that digging the new canal to increase [the canal’s] capacity, and thus allow the navigation of a larger number of vessels, will bring about a significant boom in the canal’s projected revenues,” Omar al-Shenety, chief operating officer of Multiples Investment Group and an economist, told Al-Monitor.

“Doubling the number of vessels passing through the Suez Canal is primarily linked to the global trade movement, which increases by 2-3% in regular periods, to the exclusion of periods of recession, which raises concerns about the achievement of the desired figures and revenues,” Shenety said.

With an increase in the cost of the project, the government decided to base the primary funding on investment certificates issued by the Suez Canal Authority to Egyptian nationals through Egyptian national banks. Annual interest of up to 12% was added on the value of these certificates to encourage Egyptians to buy them.

“The financial return on investment certificates will be funded from the profits of the Suez Canal, until it becomes possible for the new canal to achieve financial surpluses. Consequently, there is a problem with economic feasibility that will affect the net income of the Suez Canal allocated to cover the deficit and finance a part of the state general budget,” Shenety said.

The canal project, with its technical challenges and lack of economic feasibility studies, remains an economic adventure, through which Sisi intends to address the economic recession, taking advantage of all the options available to him in launching a new national project approved by the Egyptian people. The public merely hopes that the project does not end up in the dustbin along with previous national projects, like the Toshka or al-Salam canals.