An extension to the existing Suez Canal is set to be inaugurated Aug. 6, but some experts and civil society members say the project could have done a better job capitalizing on Egypt’s resources. 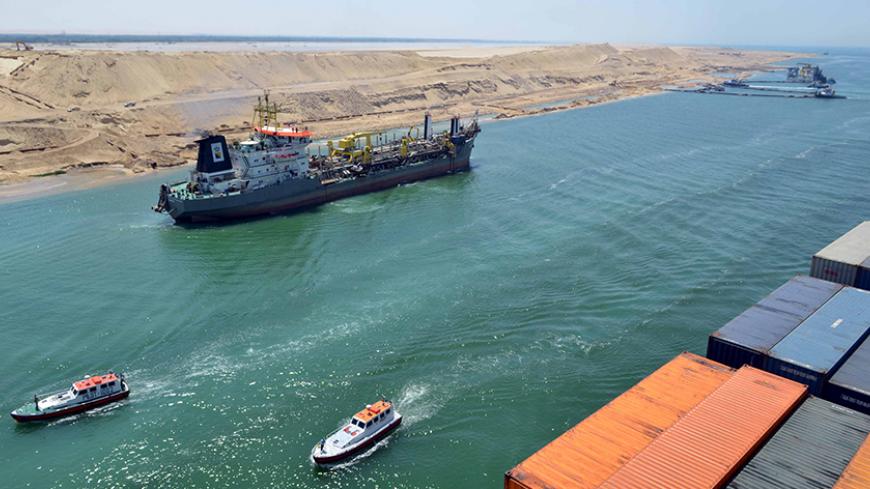 CAIRO — The new Suez Canal is set to open Aug. 6, allowing for more vessels and faster transit — all while adding to the country's coffers. Not everyone, however, is on board with the project.

The Suez Canal, which connects the Mediterranean Sea with the Red Sea, is the oldest artificial waterway in the world and a source of foreign currency for Egypt. The new 45-mile section is one phase of the Suez Canal Corridor Area Project, which is designed to turn Egypt into an international trading and logistic hub and increase the capacity of the canal from 49 vessels a day in 2014 to 97 in 2023.

The plan also aims to almost triple Suez Canal revenues from $5.3 billion at present to about $13.2 billion in 2023. Such an achievement would increase hard currency, boosting Egypt’s gross national product. The project also will create new jobs for residents of the Canal Zone, the Sinai and neighboring governorates, and result in new urban sites being developed.

However, the project is not without critics. Hisham Khalil, a member of the Supreme Commission of the Egyptian Social Democratic Party, believes a new canal is not needed. Speaking to Al-Monitor, he pointed out that, according to the project’s statistics, the average number of vessels going through the canal per day was 47 in 2014, compared with 45.5 vessels in 2013. Even at its peak in 2008 — just prior to the global financial crisis, which affected trade movement — only 59 vessels were registered. Khalil contends that, in light of weak global trade growth, there was no need to build a new canal to accommodate 97 vessels.

Construction began a year ago, funded by interest-bearing investment certificates of 10, 100 and 1000 Egyptian pounds (EGP) ($1.28, $12.78 and $127.82, respectively) issued to Egyptians. Keen to encourage Egyptians to buy these certificates, the government increased the interest rate to 12% — the average interest is 10% in banks — to be paid every three months. The move succeeded in collecting more than the targeted amount of 60 billion EGP over a few days following the offer. A total of 61 billion EGP was collected.

Based on the initial plan, the new Suez Canal was expected to be built within three years. Yet, President Abdel Fattah al-Sisi demanded that the project be implemented in one year.

But ​Kaddour said the Suez Canal Corridor Area Project gave hope to Egyptians. “It was promoted at a time when a sharp political dispute prevailed over the Egyptian society. Therefore, there had to be a national project supported by all parties,” he said.

After a call for tenders that included 14 firms, the consortium Egypt's Shair & Partners (Dar al-Handasah) was chosen Aug. 19, 2014, to develop the master plan for the Suez Canal Corridor Area Project — the entire project in Suez, Ismailia and Port Said.

According to the initial plan of Shair & Partners, the entire Suez Canal Corridor Area Project will create 1 million jobs over the next 15 years, until 2030. The project will also help develop of a number of industries, including heavy industries such as iron and cement factories, or simple industries such as food factories. The investment cost of the facilities reaches $15 billion for the implementation of the plan in the area close to the Suez Canal.

Kenawi added that the plan for the Suez Canal Corridor Area Project includes about 75% of the projects that the front envisions could be developed. Yet, one of the plan’s flaws, he said, is that it lacks the necessary studies for shipbuilding and marine services.

For his part, Kaddour criticized Shair & Partners because its plan does not focus on the containers industry. He said the project should have included a container manufacturer, which would have provided hard currency, as a 20-foot container can cost as much as $2,500. Each container passing through the canal would have had to pay $60, he said, which would have ensured a constant flow of revenue. Moreover, the plan does not include stations to supply fuel for the equipment that transports containers, nor is a facility to repair containers available.

Kaddour added that the plan did not focus on building all sizes of vessels, although Egypt is in need of those industries, as it spends billions of dollars per year to transport its exported and imported goods.

He also said the plan should have provided for the manufacturing of turbine blades to generate wind power, given that the Suez Canal zone is one of the best areas for wind power generation.

Egypt aims to produce 20 percent of power from renewable energies by 2020 and build solar and wind power plants with combined capacity of 4,300 megawatts in the next three years.