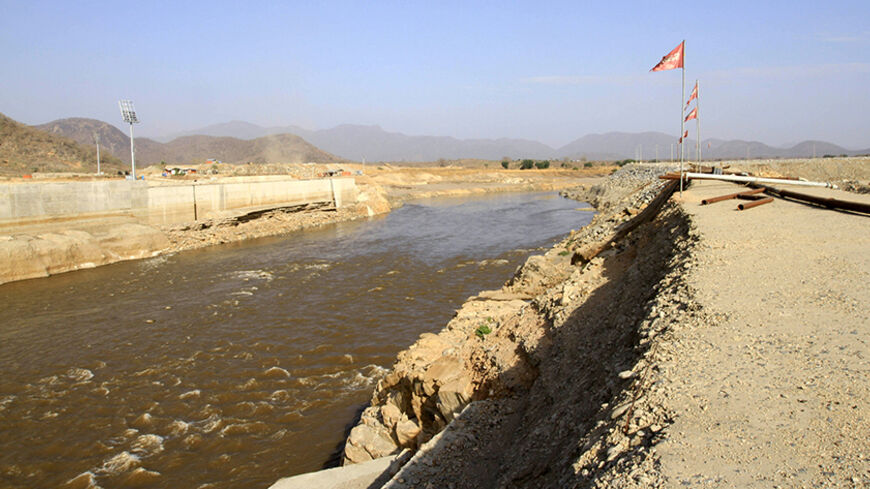 CAIRO, Egypt — The fourth round of talks on the Grand Renaissance Dam between Cairo and Addis Ababa, held in Khartoum on Aug. 25-26, focused on the procedures to implement the recommendations of the International Panel of Experts. The panel had reviewed the studies of the Renaissance Dam, which is under construction on the Blue Nile in Ethiopia, and worked to assess the damage that may be inflicted on Egypt.

However, a number of files related to the Renaissance Dam and three other complementary dams were excluded from the talks, although the Egyptian delegation insisted on discussing them, as an informed source who took part in the meeting told Al-Monitor in an exclusive interview.

The same source explained that the Egyptian delegation had prepared documents on contentious issues with the Ethiopian side regarding Egypt's share of the Nile waters. The documents included concerns about the damage Ethiopian policy causes by building dams without giving prior notice to downstream countries, as stipulated by international law. The Egyptian side's most important file was on future coordination regarding the Mendaia, Beko Abo and Kara Dodi dams. Ethiopia is preparing to construct these dams once the Renaissance Dam is operational, yet the dams may provoke future crises between Cairo and Addis Ababa. Ethiopia will likely rely on this system of dams to achieve its development goals and monopolize hydropower exports to African countries.

From the start, the Ethiopian side was keen to determine in advance the points to be addressed at the Khartoum meetings, including the formation of a new committee to complete the recommendations of the tripartite committee, whose work was suspended since the withdrawal of the Egyptian side last January. According to the same source, among the files excluded from the talks were: the cessation of the construction of the Renaissance Dam until the completion of the assessment of its negative impact on Egypt, and the Egyptian initiative to reduce the storage capacity and height of the Renaissance Dam, which reduces the amount of produced power.

Sameh Kantoush, a dam expert at the German University in Cairo, gave Al-Monitor details of his research paper on the risks of the so-called black hole dams, i.e., the new Ethiopian dams that are under construction. Cairo has so far been unable to open a dialogue on these dams with Ethiopia.

Kantoush said that the three Ethiopian dams and the Renaissance Dam will have a negative impact on the Egyptian share of the waters and will also negatively impact the quality of water reaching the Aswan Dam, given the low quantities of water and the size of the lake. The dams will also affect the drinking water installations on the Nile in Egypt. The current method of water treatment will become ineffective on the existing pollutants, especially after Sudan comes to rely on chemicals in agriculture in the next few years.

Kantoush said the Egyptian side was mistaken when it agreed to talk about the Renaissance Dam separately from the other dams. The issue is serious. The presence of these dams on the Nile must be included in a single operating system with the Aswan Dam and the Sudanese Roseires, Sennar and Khashm el-Girba dams, or else there will be serious damage to the dams closest to the river mouth.

Kantoush said the Egyptian negotiator in the fourth round of talks made five mistakes, as he was supposed to make progress, not concessions.

First, the negotiator waived Egypt's right to stop Ethiopian construction on the Renaissance Dam until new studies are completed.

Second, he made a mistake related to the current designs of the dam and the issuance of the final statement without referring to a dialogue on the amendments. All studies conducted by international consulting offices have noted the lack of economic benefits of the Renaissance Dam with the current designs.

Third, the negotiator agreed to resort to international consulting offices to develop two new studies on the effects and cross-border risks of the dam. The damage was already made clear by the previous tripartite committee's report; it is time to talk about avoiding the damage before, not after, the dam's construction.

Fourth, this mistake is related to the declared visit by the Egyptian minister of irrigation and water resources to the dam site. The minister was not accompanied by a delegation of experts to take samples from the dam site to dispel concerns regarding cracks, landslides and potential collapse.

Fifth, the Egyptian negotiator failed to open dialogue on the rest of the declared Ethiopian dams as a supplement to the Renaissance Dam.

Egyptian diplomats are well aware of this, yet they continue to postpone solutions. Egypt is avoiding new battles in the face of its current wider regional battles, including restoring its regional role in the Middle East.