An economic federation between Israel, Palestine and Jordan might facilitate the establishment of a Palestinian state by institutionalizing links between the Palestinians and Jordan and reducing Israeli fears concerning the Jordan Valley. 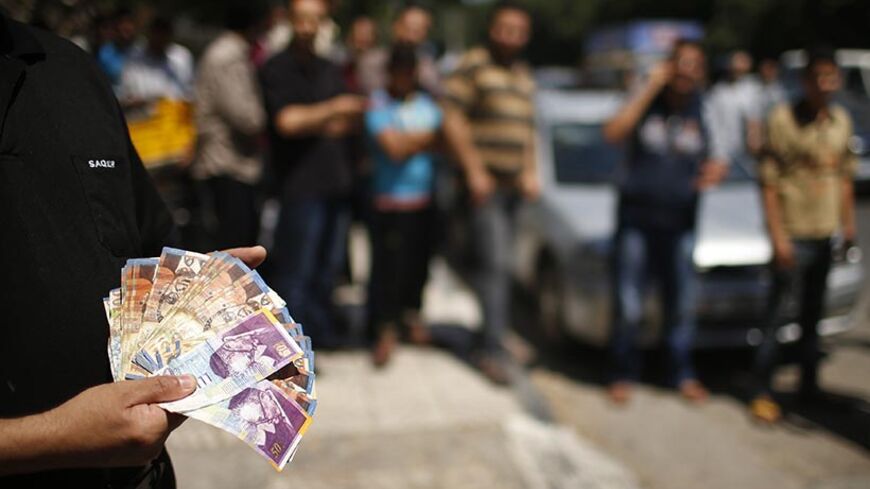 A Palestinian employee in Gaza City who was paid by the Palestinian Authority shows his money, June 11, 2014. - REUTERS/Mohammed Salem

Senior officials in Ramallah told Al-Monitor that the Palestinian Authority (PA) — alongside its statehood drive at the United Nations — will look for new plans to advance the two-state solution in coordination with the international community.

The PA is advancing innovative plans that build on the fractured structure left behind by the war. Such an "out-of-the-box" idea has surfaced on the sidelines of the peace talks overseen by US Secretary of State John Kerry: a future economic federation between three sovereign states — Israel, Palestine and Jordan. Such a structure would facilitate the resolution of the permanent status issues and eventually lead to greater economic stability. The idea is based on the geographic and demographic proximity of the three countries, as well as on today's new geopolitical reality of a coalition of pragmatic Sunni countries, including Egypt, Jordan, Saudi Arabia and the PA.

Officials in Ramallah said the Fatah-led PA needs strong Arab backing to eventually enter a new negotiation process. Palestinian President Mahmoud Abbas does not reject the proposition of institutional links to the Hashemite Kingdom, as long as it is accomplished between two sovereign states, under the umbrella of the Arab League, and with Egypt's support.

Palestinian officials say they see value in the economic federation idea, which would be crafted along the lines of the European model of "Benelux" (the Belgium-Netherlands-Luxembourg Federation). Indeed, the idea was raised in the past by late PLO leader Yasser Arafat himself. I recall meetings with Arafat where he outlined this vision and its tremendous economic benefits.

Today, Palestinian policy strategists imagine the structure as follows: a Palestinian state based on the 1967 lines and East Jerusalem as its capital, with a clear implementation timeline; an agreement on an economic federation between Israel, Palestine and Jordan, which includes free trade, water and energy sharing; a special tri-national tourism zone at the Dead Sea; transportation from Jordan to the Haifa Port; joint anti-terror security arrangements on both sides of the Jordan Valley; and the involvement of Jordan in the resolution of the permanent status issues of Jerusalem and the refugees.

The Palestinian leaders who support this initiative do it with some ambiguity. They are concerned about an excessive Jordanian foothold in the West Bank and Jerusalem, as well as Israeli economic dominance. Yet, they also see important advantages in this new-old proposition, mainly that it would accelerate the establishment of an independent state. In their view, a link to Jordan would reduce Israeli fears of Palestinian independence. As a senior Palestinian official told me, "For Israelis, there are two kinds of Palestinians: those you hate — residents of the West Bank and Gaza Strip — and those you like — Jordanians."

Another important advantage pertains to the future of the Jordan Valley, including security cooperation with Jordan on one side, and trilateral economic development on the other. This would, in their view, diminish the Israeli appetite for the valley.

Three parties would need to contribute to this structure:

As for Israeli Prime Minister Benjamin Netanyahu — senior officers in the defense establishment are making the case these days for Israel's strategic necessity to strengthen ties with Egypt and Jordan, including by involving them in the peace process track with the PA. In their eyes, such a move must be part of the necessary weakening of Hamas, both in Gaza and the West Bank.

Egypt and Jordan are considered by the defense establishment as reliable security partners. Abbas' cooperation in the West Bank is also positively viewed by those who cooperate on a daily basis with the PA's security personnel. This creates a basis of better anti-terror coordination between Israel, Jordan, Egypt and Palestine. While these advantages are recognized by Israel's political leadership, ideology and petty party politics stand in the way of Netanyahu adopting a real regional structure for Palestinian conflict resolution, along the lines of the Israel-Palestine-Jordan initiative.

The prime minister is determined to use the consequences of the Gaza war not as a conduit to strengthen Abbas, but rather to weaken his hold on the West Bank in favor of Israel's hold on it through security measures and settlements.

The challenge of pursuing a regionally-encouraged Palestinian peace policy lies on the shoulders of Ministers Yair Lapid and Tzipi Livni. Yet, nothing short of a political ultimatum by the two will move Netanyahu to accept such policies in an alternative coalition like a new unity government.

Chances are, the opportunity to advance fresh thinking on Palestinian conflict resolution will only appear as arguments in the next Israeli election campaign.