The Gaza conflict demonstrates that Egypt, Israel, the Palestinian Authority, Jordan and Saudi Arabia share common regional interests, which could lead them to an international peace conference based on the Arab League's peace initiative. 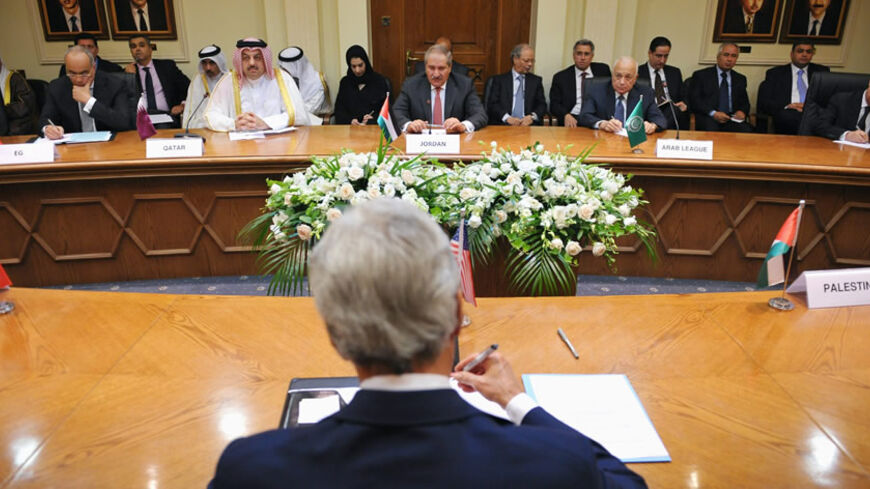 US Secretary of State John Kerry (back to camera) meets with the Arab League at the Ministry of Foreign Affairs in Amman, July 17, 2013. - REUTERS/Mandel Ngan

The war in the Gaza Strip is both about the illusion of power and about its limitations. Hamas, like a classic, guerrilla-terror organization, spent five years developing an impressive long-range rocket arsenal as well as a comprehensive underground terror world — a fundamentalist religious ideology marrying sophisticated modern armament. The well-prepared infrastructure of terror, however, turned out to be a disappointment to its architects, due to the Iron Dome air defense system and the Israel Defense Forces (IDF) incursion.

Israel is one of the leading military powers in the world; yet, it is unable to defeat a terrorist group of 20,000 fighters, surviving underneath the Gaza Strip.

Much thought is given in political capitals across the region, the United States and Europe to the strategic repercussions of the war for the region's future; not only in terms of policy analysis but also for eventual policymaking. When the guns finally go silent, it is time for diplomacy.

Senior policy analysts at the State Department are talking about a new configuration of forces in the aftermath of Operation Protective Edge. Throughout the war, a regional coalition of interests became evident in favor of a pragmatic policy and security approach. It includes Egypt, Israel, the Palestinian Authority, Jordan and Saudi Arabia. They see in Islamic fundamentalism and radicalism — such as in Syria, Iraq and Gaza — a danger to regional stability and geopolitical interests. The challenge now facing American, Arab and Israeli policymakers is how to translate this common view into a sustainable structure of stability.

Time is ticking fast as the radicals have not been weakened in their determination. Except possibly for "Washington time" where much of the focus is on the midterm election.

The clock is ticking fastest in Ramallah. Senior Fatah officials close to Palestinian President Mahmoud Abbas were last week engaged in talks with Cairo, Amman and Riyadh as to policy strategy that would strengthen Fatah in the West Bank and Gaza — an interest shared by their interlocutors as well as by Israel and the United States.

Abbas' circle sees in the aftermath of the war an opportunity to strengthen the posture of Fatah in Palestine as well as in the Arab world. They see the growing support for Hamas in the West Bank as a temporary phenomenon. In private talks, they are brutally critical of Hamas political bureau chief Khaled Meshaal and his team, and voice concern that Hamas has set back the prospects for statehood. Hamas is now part of the new axis of evil — fundamentalist terrorists — and it threatens to kidnap the international image of the Palestinian cause into this malevolent camp.

Abbas would like to project an image of moderation, and, despite the tragedy that has befallen the Gazans, has made every effort to avoid a third intifada.

In the talks that his officials held in the region, they advocated a role for the Fatah-led Palestinian Authority in the economic rehabilitation of Gaza, starting with a presence at the Rafah crossing.

In parallel, Abbas is committed to continuing security coordination with Israel, and is talking about enlarging it into regional cooperation against terror. Most of the Ramallah soul-searching is about the diplomatic path to statehood. Some advocate launching a United Nations campaign for formal recognition of statehood. They have given up on Netanyahu and view the Obama administration as one-sided. Others are looking at the conditions for a renewal of peace talks, under American auspices, based on the Arab Peace Initiative. Abbas has not yet made up his mind, and the decision will only be made prior to the UN General Assembly in September.

The US administration prefers the renewal of negotiations, but Washington's enthusiasm to engage in a new whirlwind of Middle East negotiations is rather restrained. Yet, in the halls of the State Department, there is acute awareness that the emerging pragmatic coalition of interests can only be sustained with a viable Israeli-Palestinian peace process. The Obama administration is a great believer in collective diplomacy, as was the case in its cease-fire efforts.

It is, therefore, possible that the conflict resolution efforts in the region will move under a more collective umbrella. This could eventually lead to an international peace conference at the beginning of 2015. It would include the Quartet, Israel, Palestine, Egypt, Jordan and Saudi Arabia, and would deal with the following three aspects of conflict resolution:

Much of the Palestinian thinking is based on the Arab Peace Initiative as this allows for Arab backing at a time when the Arab world is disillusioned with Hamas.

Israel must also decide on a post-war strategy that will strengthen Abbas at the expense of Hamas. For the Netanyahu government, such a policy is only viewed in the context of Gaza. As to the West Bank, Netanyahu is planning a massive propaganda drive to avoid a "Hamas-stan" in it, which again means, most probably, more settlement construction.