While Israel and Saudi Arabia share common interests, these can only be expressed if the Saudis take a leading role in the Israeli-Palestinian peace process toward a statehood based on their 2002 initiative, with the United States, Egypt and the Arab League engaging as well. 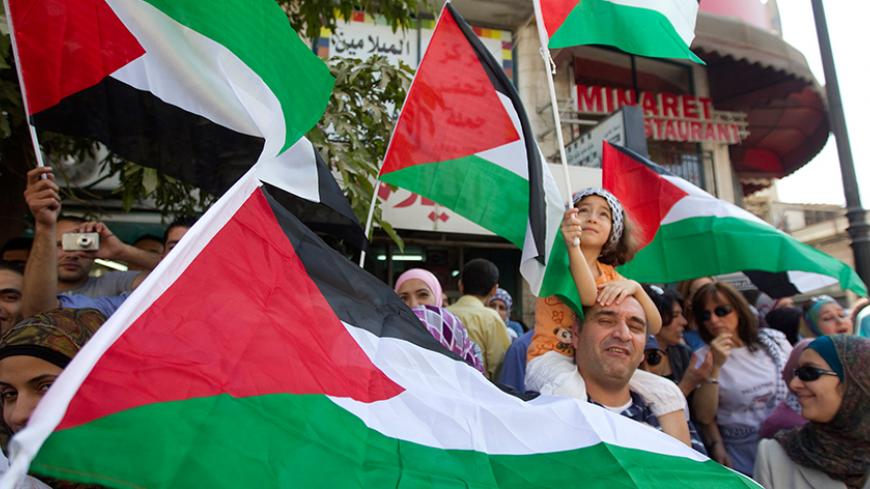 Palestinians wave flags during a rally in support of President Mahmoud Abbas' bid for statehood recognition, in the West Bank city of Ramallah, Sept. 21, 2011. - REUTERS/Darren Whiteside

Prime Minister Benjamin Netanyahu claims that, as a result of the Iran deal, a new front of common interests will be established between Israel, Saudi Arabia, Egypt and Jordan. He uses this argument as part of his public relations campaign for the defeat of the Iran agreement in the US Congress.

In reality, however, Netanyahu has done very little to bring about such a common front. He probably knows that an alliance of interests between Israel and the pragmatic Sunni Arab states demands dealing with the two-state solution. This is something the prime minister wishes to avoid, almost at any price.

A senior Palestinian Authority official, who visits the Saudi leadership on a regular basis, told Al-Monitor on condition of anonymity about the political thinking he recently faced in Riyadh. The new leadership, under King Salman bin Abdul-Aziz Al Saud, has reservations about the Iran deal and is concerned about the strengthening of Iran’s regional position that emanates from it. Yet, Saudi Arabia has publicly endorsed the agreement and holds a constructive and positive dialogue with Washington.

The Saudis are mainly concerned with the situation in Syria, Iraq and Yemen. Regarding a new regional configuration as an answer to the Iranian ambition, the Saudi leadership foresees mainly a convergence of interests with Egypt. According to the Palestinian source, a broader coalition that would also include Israel could only be possible within a process leading to Palestinian statehood. In other words, only on the basis of the Saudi Peace Initiative of 2002, which is fully supported by the new king.

Indeed, the Iran deal places the Middle East at an important crossroads: Can it create a new coalition of pragmatic countries with enough military deterrence as a response to Iranian regional ambitions?

The key to a new configuration of forces lies to a large degree with Saudi Arabia, as it is strongly affected by Iranian regional policies. While Riyadh and Jerusalem share common interests, these can only be expressed if the Saudis take a leading role in the Israeli-Palestinian peace process, based on their 2002 initiative. Thus, the road to a new coalition of forces in the region passes through a Palestinian state.

True, in the aftermath of the Iran deal passing the scrutiny of Congress, there is an opportunity to create a new alliance of forces in the region that would help to stabilize it. However, one can rely on Netanyahu, and for that matter on most of the Arab leadership, to miss this opportunity. Both sides rarely miss an opportunity when it comes to the Palestinian issue. Yet, this challenge can also be addressed by the US administration.

The United States could engage with the foreign ministers of Saudi Arabia, Egypt and the Arab League and demand a public declaration on their part, by which the Arab Peace Initiative is the basis for a new deal in the region — a deal addressing the Palestinian statehood issue, normal relations with Israel and regional opposition to fundamentalist terrorism inspired by Iran.

Certainly, this is an opportune time to address the Palestinian predicament. A continuous stalemate could lead to the outbreak of a third intifada, as Abbas reportedly warned Israeli opposition leader Isaac Herzog in their meeting in Ramallah on Aug. 18. The argument against such an initiative by the United States in relation to the Arab League and Israel is Netanyahu’s well-known opposition to any advancement on the Palestinian issue.

In the aftermath of the Iran deal, too much of the region's fate is at stake, overriding domestic political considerations of either the Israeli or Arab governments. The same determination that drives President Barack Obama to take a courageous diplomatic route on the Iranian issue should drive the administration on the Palestinian issue in favor of a necessary stabilization of the Middle East.