Iraqi Turkmens fleeing from Sinjar receive no help from Turkey

Kasim Kara, Iraqi Turkmen Front spokesman, says he was not allowed into Turkey at the Habur gate on Aug. 7 because not all members of his family have passports. 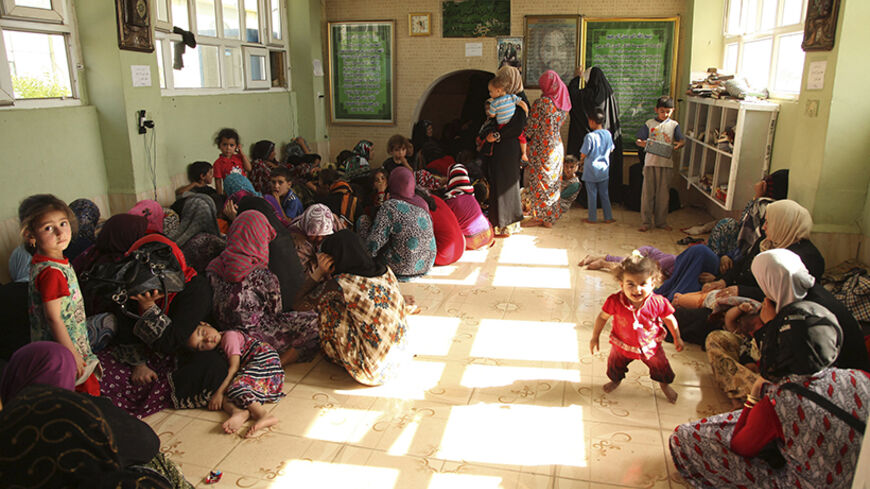 “The [Turkish] border is our last hope. Hundreds of families started their march for their last chance of survival either by car or on foot,” Kasim Kara, Tal Afar Turkmen Front spokesman told Al-Monitor on Aug. 7, just an hour before US President Barack Obama ordered targeted airstrikes to prevent genocide and protect the civilians trapped in the Sinjar Mountains escaping the radical Islamic State (IS) militants’ threat.

With the capture of Sinjar on Aug. 3 by IS militants, hundreds of families fled to the Sinjar Mountains with only the clothes on their back, trying to escape beheading and rape of their women.

On Aug. 6, Yazidi lawmaker Feyyan Dahil brought this chilling account of terror by IS to the attention of the Iraqi parliament.

“Mr. President, we are slaughtered under the slogan of ‘No God but Allah!’ Thus far, 500 men were slaughtered,” she said. “Our women are slaughtered and sold as concubines. There is genocide against Yazidis. My family is slaughtered like the rest of the Iraqis — Shiites, Sunnis, Christians and Turkmens.” She added, “What we want is support based on humanity, away from political differences. I speak here in the name of humanity. In the last 48 hours, 30,000 families have been trapped in the Sinjar Mountains without food or water. Seventy children died from thirst. I ask the Iraqi parliament to stand against the slaughter. Save us!”

Amnesty International sent out the same warning. “Many members of minorities are even fleeing areas where there seems to be no imminent danger of an IS attack as they are so traumatized by their recent displacement. They are gripped by panic and fear,” Donatella Rovera of Amnesty International said in a written statement.

Speaking to Al-Monitor, Kara reflects on that horror. “Humanity has not seen such a thing before. We are in need of a drop of water, but no one is helping.” Kara heads one of the Turkmen families who came to the Habur border gate with the night of Aug. 7 only to be turned back. “I have a big family, two wives and nine children. I drove us all to the Habur border gate last night. We had no water, nothing. We also don’t have passports, except for me and one of my wives. They did not let us into Turkey,” Kara said. “I have been calling the authorities, asking for help — to no avail.” He said, “We’re now driving back to Dahuk, but it is all a mystery where the Unites States is bombing, or whether they will be able to stop these IS militants before they kill us.”

In contrast, the Turkish government has so far allowed more than 1 million Syrians — with or without passports or any proof of identification — to cross its borders.

Turkey’s Foreign Minister Ahmet Davutoglu blames the past grievances, implying also the US occupation of Iraq in 2003 that triggered an ancient sectarian conflict to surface, as the core reason that radical groups such as IS have emerged. “[IS] came into being as a reaction. It can be considered as a radical, terror organization, but there are Turks, Arabs and Kurds joining this force,” he told the NTV news channel on Aug. 7. “The previous discontentment and anger created a strong reaction among a wide range of people. If Iraqi Sunnis were not excluded in the [forming of the new Iraq] this would not have happened.”

Yet, in Ankara on Aug. 7, several high-level security meetings took place. Turkey is said to be discussing the establishment of a refugee camp in Dahuk, though it is anybody’s guess whether IS militants would leave it in peace. Turkish Prime Minister Recep Tayyip Erdogan gathered the military and intelligence chiefs to discuss the latest developments in Iraq. Without being directly informed of the content of these meetings, a government insider told Al-Monitor, “Unless a US-led coalition of goodwill or a UN authorized action were not to be put in place against these IS militants, this threat is now real and almost uncontrollable at this stage. … One wonders why there is no talk about this [rising radical Islamic threat] at the UN or in the United States. It is as if they want Turkey to get involved, and fight against these groups.”

Since it pulled out of Iraq in 2011, however, the United States for the first time used its military on Aug. 8 to target IS militants upon the invitation of the Iraqi government.

Just as Davutoglu equates any reporting that the Erdogan government had helped groups like IS to outright “treason,” no one affiliated with the Erdogan government prefers to admit that their policies had also contributed to making a dire situation even more complicated. “It does not matter whether Turkey made any mistakes or not. We now have this threat and what are we going to do about it?” the government source told Al-Monitor. “If they are not stopped in Iraq or in Syria, there will come a time that we will have to fight against them. To do that, if Turkey needs to join its forces with the peshmerga in northern Iraq, this prime minister is confident enough to take that decision and make it happen.”

The situation remains hectic. Kara told Al-Monitor that thousands in the Sinjar Mountains are waiting for helicopters or cargo planes to rescue them from where they are trapped. “I just talked to them,” he said. “This group is mainly [made up of] Yazidis, but there are Turkmens among them as well. They are protected by the armed PKK [Kurdistan Workers Party] militants.”

Sinan Ogan, Igdir deputy of the Nationalist Action Party (MHP), said, “This is a well-orchestrated effort by Davutoglu, who is legitimizing [past] PKK terror [against Turks] by portraying the PKK as heroes safeguarding Turkmens. …This is a policy that contains nothing right from the beginning.”